Do you have an iPad or an iPhone laying around or as one of your main devices? Now you can use them to interact with your Linux PC a little easier. KDE Connect has just released onto the Apple App Store, opening up more options for those that want it.

Here's the current features it supports: 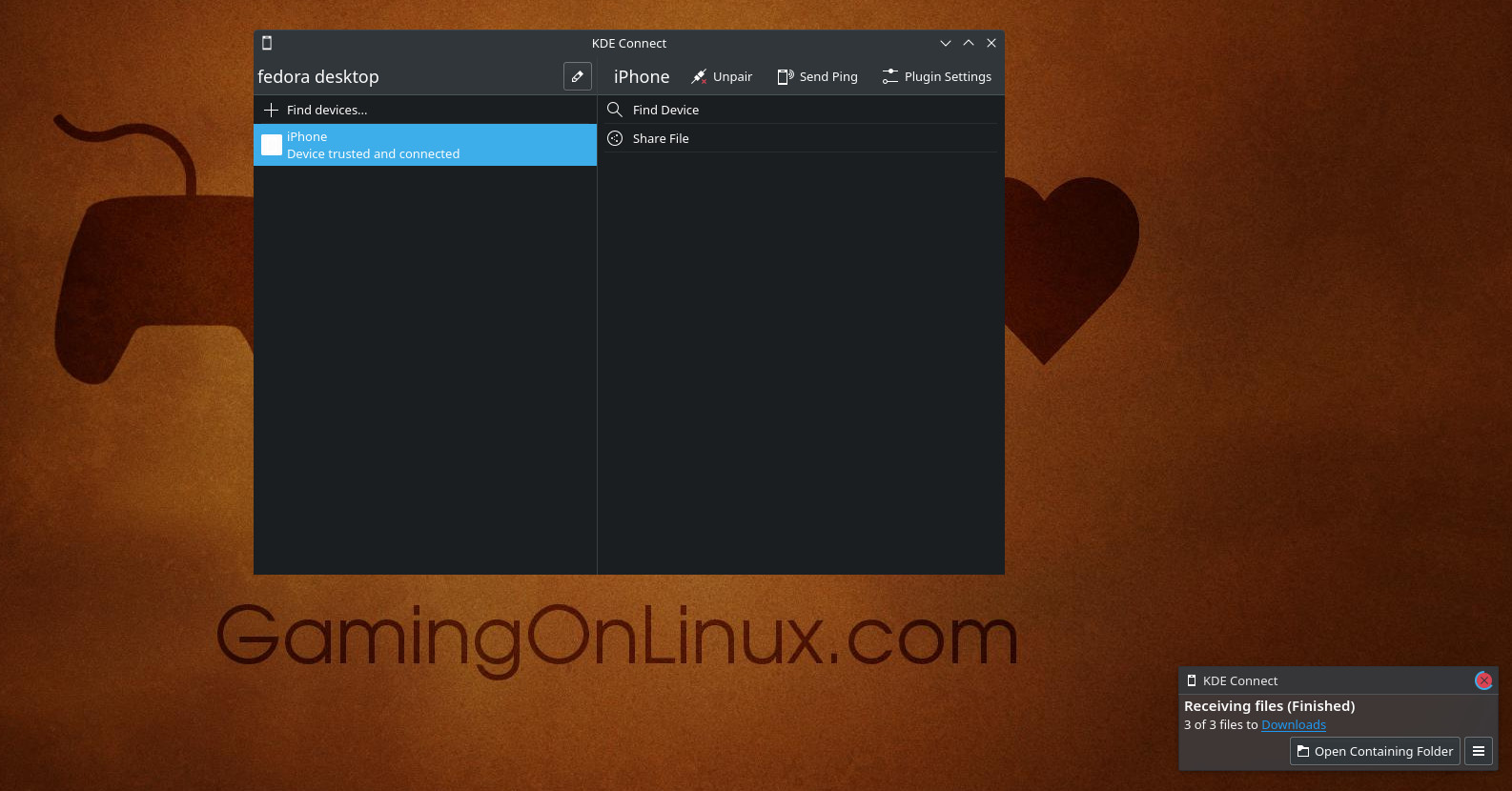 As a big KDE fan and an iPhone user, this pleases me. Being able to just quickly send anything over from my phone that I discover and want to deal with on my Linux PC is great.

View PC info
I have never, ever, gotten KDE Connect to work. The one "problem" I've had in my almost two years of Linux that I've never been able to solve. Sorry, just needed to rant a bit.

Quoting: CyborgZetaI have never, ever, gotten KDE Connect to work. The one thing "problem" I've had in my almost two years of Linux that I've never been able to solve. Sorry, just needed to rant a bit.

Weird. I just today for this article loaded it onto my iPhone. Loaded up KDE Connect on Fedora, paired them, started transferring files. It was blissfully easy.
0 Likes
fenglengshun 10 May

View PC info
Oh, that's nice. I've been thinking of getting an iPhone SE next year because I want to see what's the fuss regarding iOS is all about so that I can properly talk/criticize it - the main holding point for me had been my gacha games (I have since retired from gacha), YouTube Vanced (RIP - though I still use the last release on my phone), and KDE Connect.

KDE Connect also has a Windows release I think, though unfortunately it couldn't work with my Win7 laptop from work. Honestly, it's really versatile. The only thing that would make it better is some redundancy in way to connect, like with Bluetooth as well on top of WiFi, and maybe connecting just with phone data although that would probably require running a server (I wouldn't mind tbh, as long as it's open-source as well and self-hostable a la Bitwarden, I'd rather pay for KDE's than something like Pushbullet).
0 Likes

Quoting: fenglengshunKDE Connect also has a Windows release I think, though unfortunately it couldn't work with my Win7 laptop from work. Honestly, it's really versatile.

Does Windows have similar programs? Because I too think it's a really cool and handy thing!
0 Likes
mr-victory 10 May
View PC info
YYYEEEEESSSSSSS!
Edit: Needs ios 14 and higher. NOOOOOOO!

View PC info
I would be very pleased if iOS KDEConnect could send SMS from my PC like the Android version can. Maybe eventually.
0 Likes
ssj17vegeta 10 May
I never thought Linux enthusiasts could ever use iOS. Aren't those two OSes polar opposites in terms of philosophy ? Total freedom VS no freedom (unless jailbreak of course).

Don't get me wrong, I can totally understand the appeal of IPhones for most users, but someone who likes to tinker, install whatever he/she wants ?

Still, good news for those users ! I've had quite a few problems with KDE Connect though, mainly the useful "make the phone ring" when you can't find it : if your phone session is locked (which will always be the case if you use that feature) you have to kill the app in the app manager to make the sound stop.
2 Likes, Who?
mr-victory 10 May
View PC info

Quoting: ssj17vegetaI never thought Linux enthusiasts could ever use iOS. Aren't those two OSes polar opposites in terms of philosophy ? Total freedom VS no freedom (unless jailbreak of course).

Let's say I didn't know what Linux is when I started using my phone and it's been enough time for my phone to go EOL, hence I'm freaking out in the post above.
1 Likes, Who?
fenglengshun 10 May

Quoting: EikeDoes Windows have similar programs? Because I too think it's a really cool and handy thing!

There is a KDE Connect installer on the official downloads page along with a Microsoft Store release. I think it requires Windows 10, maybe Windows 8.1, though.

Other than that, Microsoft does have a Link to Windows app on Android and the receiver app on Windows 10 is built in. I think there are functions that are Samsung exclusive or Samsung optimized though, like Screen Mirroring (the only thing that KDE Connect lacks right now).

As far as third party goes, I've only ever used Pushbullet and Crono. Both of these are really only for notification mirroring and sending files/url, though. That said, the main plus is that they work over data, so you can send files/url even when the device is offline or not connected to the same WiFi.


Quoting: ssj17vegetaDon't get me wrong, I can totally understand the appeal of IPhones for most users, but someone who likes to tinker, install whatever he/she wants ?

With the locking down that Android has been doing, I've been feeling less and less need to tinker with my Android phone. I just... install the app I need, and use them.

Don't get me wrong, if I do end up trying iOS, I'm fully expecting frustration over several of its artificial limitations. But I just want a decent phone which can last for more than three years without having weird performance issues that infuriates me more than losing access to a few apps. I'll have to strongly consider the pros and cons, but I think there are users who don't value what Android does enough that iOS won't over what iPhone has advantages on.

Nevermind how some people (especially in the US and Japan) already have iPhone, but they might not be able to afford Mac and uses normal PC/laptop, who then made the switch to Linux.

And it's not like iOS and Linux don't have anything in common. Consider the fact that GNOME is the de facto default DE of Linux as a whole- and that there are people who argue for the removal of themes and all the other stuff that GNOME devs does. Vendors like Canonical and Red Hat sometimes makes questionable choices as well - I don't think the Ubuntu users who happily uses Snap would have much complaint about iOS.

ripper81358 10 May
View PC info
While i have used KDE Plasma for many years i am not happy with KDE Connect. It is a great tool but for some reason the connection to my androidphone fails as soon as the screen is locked.

I have to unlock the phone while my PC is running, otherwise my phone isn't detected by KDE Connect. I don't know if this caused by Android or my Kubuntu system, but this issue is rendering KDE Connect useless for me.
0 Likes
1/2»
While you're here, please consider supporting GamingOnLinux on: