For all the hype around the Steam Deck there is one major controversy with the fan. There's two fans being used, with one having a noticeably louder pitch than the other and now Gamers Nexus are attempting to find out why and how bad it is.

Since I've been through both fan types, I can safely say they are very different in the type of noise they give out and it's good to see people with the right equipment attempt to dive into the why. The original fan that was used in the review units is still used, Valve just switch to whatever they have available at production time it seems. The original "Huaying" model sounds more like a nice blower, but the "Delta" fan gives this annoying high-pitch whine. Although, recent fan curve updates from Valve has dramatically helped with that.

In the Gamers Nexus video they do a tear-down of each fan, and you can see there are some pretty big differences. Notable bits being the blade design with the Delta fan blades being much more curved, how close the Delta fan is to the inside casing and the Delta fan outer casing also has bigger cut-outs for airflow too.

Anyway, check out the Gamers Nexus video below because it's a good one. 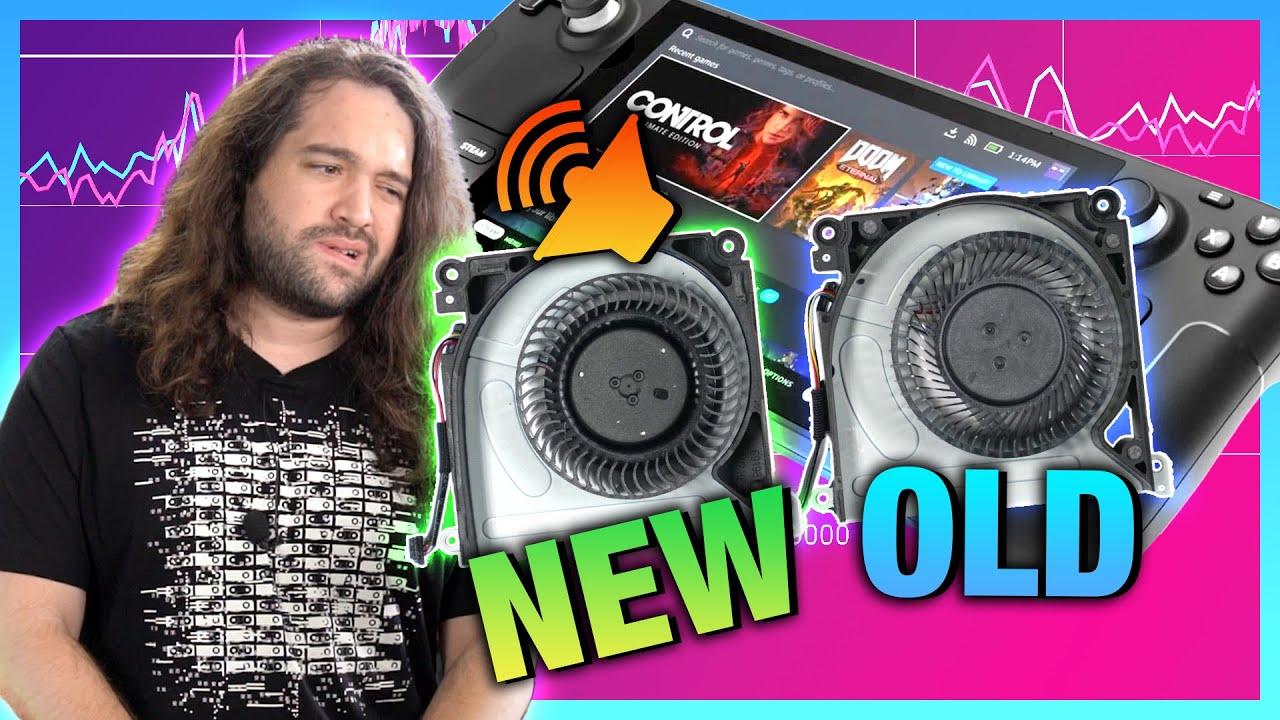 The good news is that if it bothers you, it's clearly real easy to swap the fan for a different one as it's really accessible. iFixit are also stocking the original less-noisy fan, although they're out of stock as expected.

View PC info
If anyone is interested, here's my experience with two different fans in the Steam Deck:

I had to send my Deck back because the left trigger was grinding against the housing. In addition, the fan had a nasty high-pitched sound. To be clear, I would not have sent the device back only because of this, because I know that it is a series problem. And the fan didn't sound defective like Liam's either. No, it was just one of those annoying mini-fans like you get for the Raspi.

But now, luck of the draw: my replacement device doesn't have that nasty whistling sound. The fan is maybe not a bit quieter, but much more pleasant. I don't know if Valve has changed over completely in the meantime, but now that I have the comparison, I realise how annoying it actually was. The fan in my old device was always present. At some point you hear the noise, even when the fan is off. With the new device, I don't even think about the fan anymore. My brain completely blocks out the normal fan noise after a short while. I even reset the Deck to the old fan curve.

EDIT: The difference I heard is not actually explained in the video. Neither of the two fans sounds really bad either. For me, it was a high-pitched noise that I could hear without any problems even at a distance of 8 metres. I didn't hear any of the normal fan noise at this distance, but I did hear this high-pitched noise. I don't know which fan I had. There may also be deviations in the series.

View PC info
Since the update my fan has become significantly quieter... in fact it doesn't seem to come on at all when playing a lot of indie games now. Beforehand it would be blasting away even when I was simply messing around in desktop mode!
1 Likes, Who?

View PC info
... The fans in the article's picture are staring at me...

View PC info
im no blower fan expert, but i have seen a number of them over the years...

isnt it obvious that the fan fins are "pushing" air opposite from each other?
one goes clockwise the other goes counter-clockwise

i guess thats a trade off for volume of air to noise....
0 Likes

Wouldn't that lead to the conclusion it was not actually the fan that was causing that noise, but something other such as coil whine?
0 Likes

Wouldn't that lead to the conclusion it was not actually the fan that was causing that noise, but something other such as coil whine?

I think that 1xok means that it's the sort of noise that lingers and causes one's ears to ring. I have a Raspberry Pi fan that does that - you'll "hear" the "EEEEEEEEEEEEEEEEEEEEEE!" noise for a while after stepping away from it.
3 Likes, Who?

Wouldn't that lead to the conclusion it was not actually the fan that was causing that noise, but something other such as coil whine?

That was a bit of an ironic exaggeration. Of course, when the fan is off, the high-pitched whistling is gone.
4 Likes, Who?