A celebration of upcoming games, Steam Next Fest: June 2022 is now live for you to smash that download button on various demos to see what you think. Much like previous events, there will also be various livestreams on the official event page and on pages for individual games for you to speak to developers and see some footage.

Valve also created a little trailer for it: 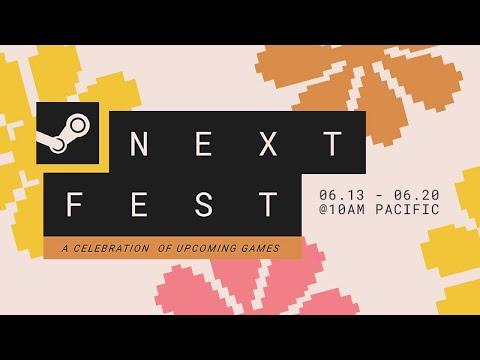 Here's just a small hand-picked selection of the demos that offer up Native Linux support and look interesting:

Not only do you get to try some games, Valve has also added special badges you can earn during the event for playing various demos. So if you love collecting things on Steam for your profile, it's a nice bit of added fluff to get you to play more.

Since I've been excited for this one, here's some Linux gameplay from the FPS game Selaco: 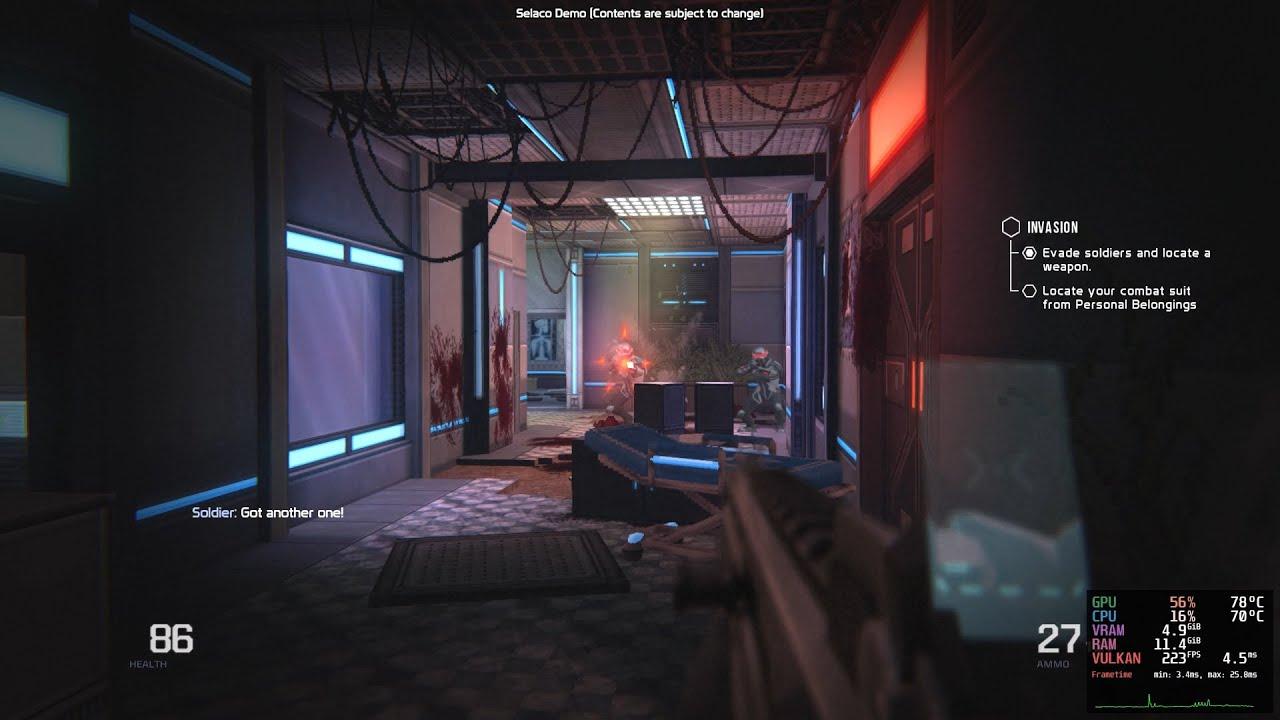 mircalla 13 Jun
I thought Barkhan was going to be a game about dogs leading armies across the Eurasian steppe but I see it's a Dune RTS with the serial numbers filed off (to the point of naming the factions "Clan of Trickery" etc).

View PC info
Only game that I played today was Selaco. It's bit like simplified version of System Shock (Selaco doesn't have the RPG elements). In addition of running around and shooting enemies, there's plenty of things to interact with. Including things like combination locks that have codes mentioned in log entries. Don't let the retro graphics stop you from trying the demo.

There are some issues though, but hopefully they're fixed for the final game. The player icon is hard to spot in the map as things are mostly white lines, including the player icon.

Also doors that need keycards don't always show up. Maps are relatively small, so that's not a blocker at all. You might even find some useful items and secrets while hunting for the door.
2 Likes, Who?

View PC info
Check out Kandria as well!
1 Likes, Who?

View PC info
I remember seeing the World Turtles trailer before. Kinda reminds me of The Wandering Village (which also has a solid native Linux version), in the whole "city builder on top of a giant creature" theme.
1 Likes, Who?
Deleted_User 14 Jun

Would be nice to have some indication of the genre within such lists of games, since some of them are ruled out in general in my case. It would be a quality of life addition.
2 Likes, Who?

Quoting: Deleted_UserWould be nice to have some indication of the genre within such lists of games, since some of them are ruled out in general in my case. It would be a quality of life addition.

You're better off using the filters on Steam. Not only can you filter for everything, but you also see all demos instead of just a pick. And with 175 native linux demos, there is A LOT more than listed in the article.
1 Likes, Who?

Quoting: mircallaI thought Barkhan was going to be a game about dogs leading armies across the Eurasian steppe but I see it's a Dune RTS with the serial numbers filed off (to the point of naming the factions "Clan of Trickery" etc).

I kinda liked my version...

I tried it too. Too bad it tries too hard to be Dune game that it hasn't copied things from Total Annihilation for example. Being able to queue all kind of things is just so handy.

It still seems to be solid enough. I have seen worse.
0 Likes

Find All 3: Travel
Hidden object game mixed with a coloring book. Basically things work like in simple hidden object games, but in this one level is black and white and gets colored when you find the targets. There's little bit of gatekeeping as you have three different types of things to find at a time, by finding all the objects in a slot, slot gets another types of things to find.

Simple as that. If you like hidden object games, demo will keep you occupied for a while. If you want more, previous games in the series are not that expensive.

Pocket Wheels (Proton)
This one is kind of toy car 3D platformer. I haven't played Micro Machines, but based on screenshots, both games have graphically same idea: tiny cars in environments where you can really see that they're tiny.

Exploration is also big part of the game as level has (which in demo is a kids room) coins and batteries to collect. Coins seem to be for unlocking new cars and batteries open next room (which is not included in the demo). Level has also racing challenges.

Most fun I had was with the racing challenges, in the demo collecting items didn't cause any addiction. I think somebody might still enjoy it though.

Even when demo is for Windows, system requirements contain Linux, so native version might be coming up.

Adamstown
Adamstown is tile laying puzzle game about building cities. Tutorial gets easily dismissed, but luckily it can be re-enabled in the settings. Tutorial is needed as it takes a moment to get used to the controls.

Things start simple, but slowly tiles include targets. For example tile might have target of five continuous blocks of red buildings.

What makes that difficult is that tiles have hooks (I forgot what the game calls them) which enable attaching them to other tiles. Having hooks on all sides of the tile is rare. Because of that, after playing a while there might be half completed area that have no hooks available at all on its side. Which is not game over at all, you just have to start building from closest hook.

There's certainly puzzle element in there. Not wishlist material for me, but I can clearly see that this might work for somebody.

Hands of Necromancy
GZDoom based FPS inspired by Heretic. Decent level design, puzzles where just too hard for me. Might take a another look later.

If you have no idea what kind of game Heretic is, its Doom, but weapons are staves and wands. And no, Heretic was inspired by the original Doom, not the 2016 one.

Machinicide
This one is FPS that has gimmick that guns are disposable. I didn't have enough patience for it, but it also advertises that there's gravity switching mechanic.

So lot of potentially cool stuff, but for some reason it doesn't feel fun.

I also played Homemade TCG, but it seems to bit of mess right now. It doesn't seem fun.

Missile Input is broken at the moment. Good news that Python source code is included in the download, so if you treat it as programming game, it could be fun. Coincidentally description says that it's a typing game. Bit more seriously though, lets see what developer responds to my bug report.

I also played Astro Colony, which seems to be first person space station building game with some automation. I think I'll get back to that later, there's still lot of things that I haven't tried.
2 Likes, Who?

View PC info
Tried Selaco (wow, that is tough), Renown (borked) and Astro Colony (two hours were gone in the blink of an eye). Still lots to try!
1 Likes, Who?

View PC info
Another batch from today. Most interesting games are at the top.

Astro Colony (Proton)
I played the demo some more and watched the stream, so I'm confident enough to give short review. It's a building game in first person perspective. You start in very simple space station, but can eventually dock to asteroids in order to build and mine. Lot of the production can be automated via conveyor belts. Great fun and I have still things to try out in the demo.

Demo is available only during the event (as stated by the developer, no need to guess), so if you're interested in the genre at all, now would be good time to start playing the demo. It's bit of a time sink, so if you want to try everything that's included in the demo, prepare to spend several hours with the demo.

There's system requirements for Linux, so I guess native version will come at some point.

Sweet Dreams Alex
This one is kind of tower defense inspired puzzle. Tutorial is missing few hints how to start the game, but at least points to the right direction.

Basically the premise is that you should delay the nightmares long enough so they don't reach the sleeper in time. How nightmares are delayed works quite much like in tower defense where you can place walls. Walls are just cardboard boxes in this one. And there's no towers, so you can't actually kill the nightmares.

Starts very simple, but I got stuck in bit harder level where I think I did everything that I can, but nightmares are one second too fast.

If they bring enough new things during the levels, this one might be interesting for people who love puzzles.

Grim Horde
This one is weird, basically your character is demon who can open portals that will summon the horde slowly. At the same time villages and defenders attack the portals and you. If you manage to kill villagers, you can collect souls that can be used to buy upgrades.

After a while you unlock boss battle. I'm not totally sure if its based on amount of destruction or time. Game doesn't really tell you.

I wasn't able to figure out what to do in the boss battles. But I guess this one is good for somebody who wants to try out something weird and different.

Decent enough, but based on the demo, there are more fun racing games out there right now.

Flashout 3
Another racing game. This one is more futuristic and has weapons. It just didn't seem fun enough and tracks are harder to read because of the graphical style.

If you are not tired of Wipeout style racing, might still be worth trying out. Just don't expect too much.

Poly Fury
Quite simple bullet hell shoot 'em up. It seems to consist of boss battles where you can only move in circle around the boss.

If you want to something that you have seen in few minutes, it might work as a quick snack. But ultimately it seems bit pointless.
1 Likes, Who?
1/2»
While you're here, please consider supporting GamingOnLinux on: