Part of the power of the Steam Deck is that not only is it a great portable for gaming, it's Linux and has a full desktop mode and so you can also create games with it.

There's a ton of game engines out there that support Linux natively including Godot Engine, Unity, Unreal, Defold, GDevelop and the list just goes on and on. Game Maker too, although they only officially support Ubuntu right now and it's in Beta.

YouTuber Taranasus Videos decided to actually attempt to build a game on the Steam Deck and play it on there. Obviously to do this you really would need to hook it up to a monitor, with a mouse and keyboard but the point is that it's absolutely possible to do. Not only that, it gives developers a pretty good baseline for what to optimize against too. The idea has Valve excited too, with designer Lawrence Yang mentioning on Twitter "Hey look, game development on Steam Deck, no other PC required! This is one of the things we were really excited about enabling with Steam Deck, and it’s awesome to see folks already getting their feet wet.".

Really fun to see things like this, how you can just download a game engine onto a Steam Deck and get going. 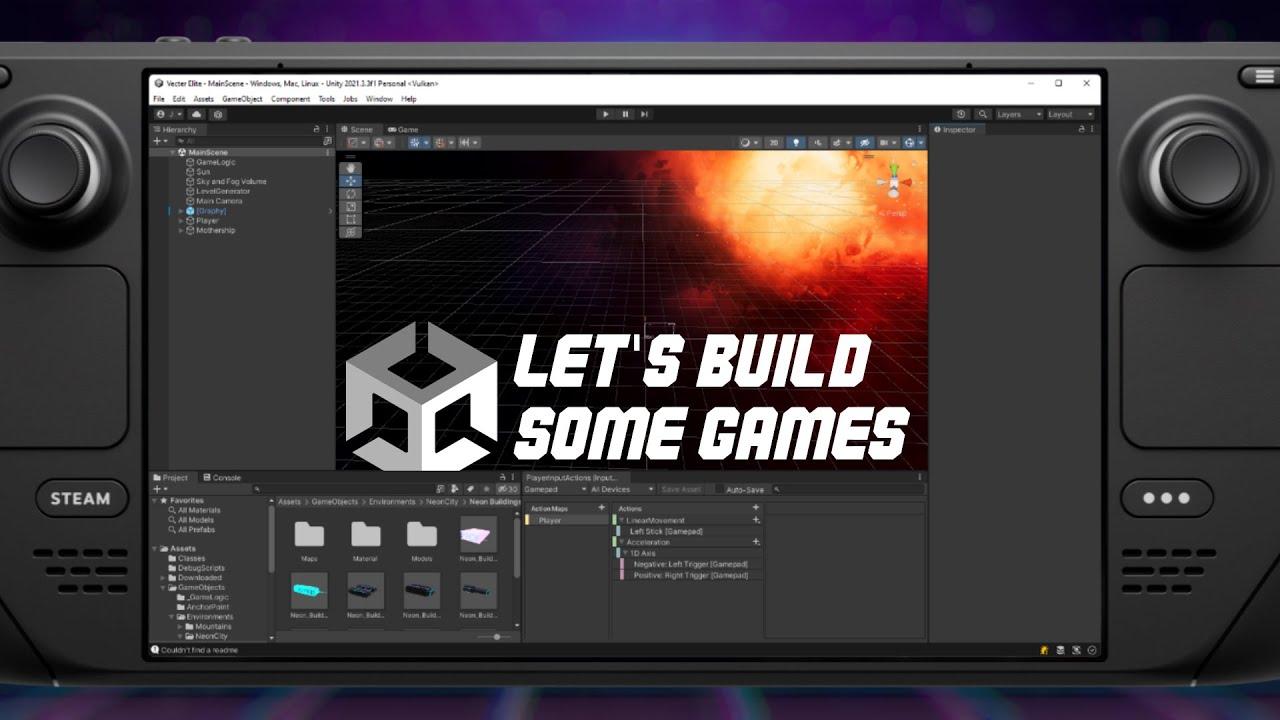 I wouldn't be surprised if we see plenty more of this. We've all seen how devices like the RaspberryPi opened up a new world to people, seems like the Steam Deck could too.

There is a good 'should' reason for why you should develop a game on the Steam Deck.

If you're targeting the game running on the Steam Deck, developing it and running it on the Steam Deck is a great way to test the game as you're making it.
1 Likes, Who?
setzer22 13 Jul
I didn't have any doubts the Steam Deck, a regular Linux machine is capable of doing gamedev. Now, Unity on Linux... That's another story. It runs, until it doesn't and then you need to hunt down answers on the Unity forums, where developers don't seem very keen on supporting or even acknowledging Linux as a platform.

Luckily we have Godot :) So I'd encourage anyone looking to develop games on their Steam Deck to pick that up instead! It's a very fun engine to mess around with, and it's free and open source.
4 Likes, Who?

grigi 13 Jul
View PC info
I started coding on an NEC V20. It had way more power than I could utilize for years. Glorious 10MHz 640KB pc with a 10MB MFM drive that made bloopy noises as it operated.
Nostalgia is a great thing.

The notebook I gave my kids is... a decade old. It "works" though. A Deck would pretty much quadruple processing power over it though

View PC info
In addition to these all-in-one game engine solutions it would also be possible to do some more general software development on a Deck without even needing to unlock it into developer mode. Flathub has code editors and a number SDK extensions you can install, so you could work on Rust or JS projects for example. For example basically my entire development environment would be transferable quite easily to the Deck, since I already run Emacs in Flatpak and use for example the Rust through a Flatpak SDK extension.
0 Likes

View PC info
While we're doing that, we can also host the game's wiki and help pages on the Steam Deck as well. And the email server so you can contact the devs. Oh, and run the backup system and the source control. We can even run a virtual machine with Windows, and test the game on that too. (Messing, heh!)
1 Likes, Who?
eldarion 13 Jul

There is a good 'should' reason for why you should develop a game on the Steam Deck.

Not really. As a software developer myself, you will have to do A LOT of code builds so, developing a game inside steam deck is not ideal because it will possibly slow you down. It's better to have a real desktop or laptop for coding. Now for testing, it kind of makes sense. But testing is another step in the development process.

Another point is that noboddy will seriously think on doing games specifically for steam deck because it will limit you in terms of sales.

grigi 13 Jul
View PC info
I think you missed his point. You have what you have, especially as a kid. And you don't really care about sales as its mostly a learning/showing-off thing at that stage.
3 Likes, Who?

Liam Dawe 13 Jul
View PC info
People dismissing it definitely miss the point. Hook up a cheap bluetooth keyboard + mouse, plug into a monitor and it's a pretty good PC, and more powerful than the PC I already know some developers make their games with. It's about what you have and can access, just like how a RaspberryPi is the only PC some people have.

Quoting: eldarionAs a software developer myself, you will have to do A LOT of code builds

Hey, that's what build farms are for :)

With huge amounts of RAM, CPU and storage for debug info and compiler cache!

Quoting: gradyvuckovicAnother point is that noboddy will seriously think on doing games specifically for steam deck because it will limit you in terms of sales.

Well, sure, if you mde a game that could only run on the Steam Deck, but I'm not sure that sort of exclusivity is even possible.
1 Likes, Who?
1/2»
While you're here, please consider supporting GamingOnLinux on: