The Excavation of Hob's Barrow has some real fancy pixel-art

Gimme! The Excavation of Hob's Barrow is an upcoming adventure from developer Cloak and Dagger Games with publishing from Wadjet Eye Games and it instantly grabbed my attention.

Originally called INCANTAMENTUM, the developer decided on the name change because it was a bit difficult to remember and pronounce. Can't really argue with that. Teaming up with Wadjet Eye also means they are getting help to expand and polish the game with voice acting, along with getting Linux and macOS ports too.

Check out the new teaser trailer below: 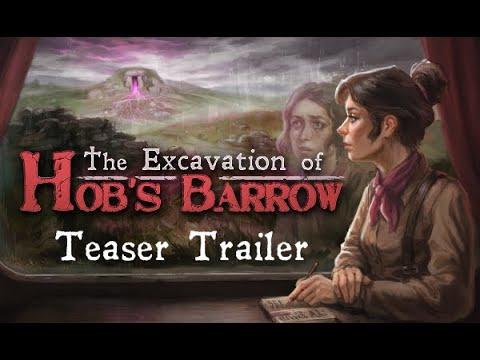 Antiquarian Thomasina Bateman is writing a book on the barrows of England, documenting the treasures she finds buried within. When an intriguing letter summons her to the small village of Bewlay, tucked away in the remote countryside, she sets off by train with her assistant a day behind.

Upon her arrival, however, the mysterious man who summoned her is nowhere to be found. Her assistant never arrives. A stubborn landowner refuses access to the barrow, and the locals are wary of this woman who is traveling alone and (gasp!) wears trousers.

The excavation of Hob’s Barrow is off to a rocky start. And then Thomasina starts having strange dreams…

Wishlist and follow on Steam. A release is due later this year.

We do often include affiliate links to earn us some pennies. We are currently affiliated with GOG and Humble Store. See more here.
About the author - Liam Dawe
I am the owner of GamingOnLinux. After discovering Linux back in the days of Mandrake in 2003, I constantly came back to check on the progress of Linux until Ubuntu appeared on the scene and it helped me to really love it. You can reach me easily by emailing GamingOnLinux directly.
See more from me
Some you may have missed, popular articles from the last month:
1 comment
BunchOfAtoms 27 Jul
Poe and Lovecraft vibes are strong in this one. Love it.
0 Likes
While you're here, please consider supporting GamingOnLinux on: