A genre is born: Horde games

Vampire Survivors entered Steam Early Access in December 2021, and was described by the developer as "a gothic horror casual game with rogue-lite elements." The game skyrocketed to success almost immediately, and at time of writing has over 100,000 Steam reviews and an Overwhelmingly Positive rating.

The game sees you fighting off massive waves of enemies with increasingly powerful abilities. The mix of arcadey action, roguelike randomization, run-based gameplay, and a low price point was a massive success, and, predictably, Vampire Survivors inspired a whole industry of similar titles. Thus we are left with the question: what are the key elements of the genre that exploded into existence with the success of Vampire Survivors?

While many elements were present in earlier games, like Crimsonland in particular, Vampire Survivors was actually inspired by a mobile game named Magic Survival. Whether by refinement of its predecessors' formulae or blind luck, Vampire Survivors has brought these elements to the masses. 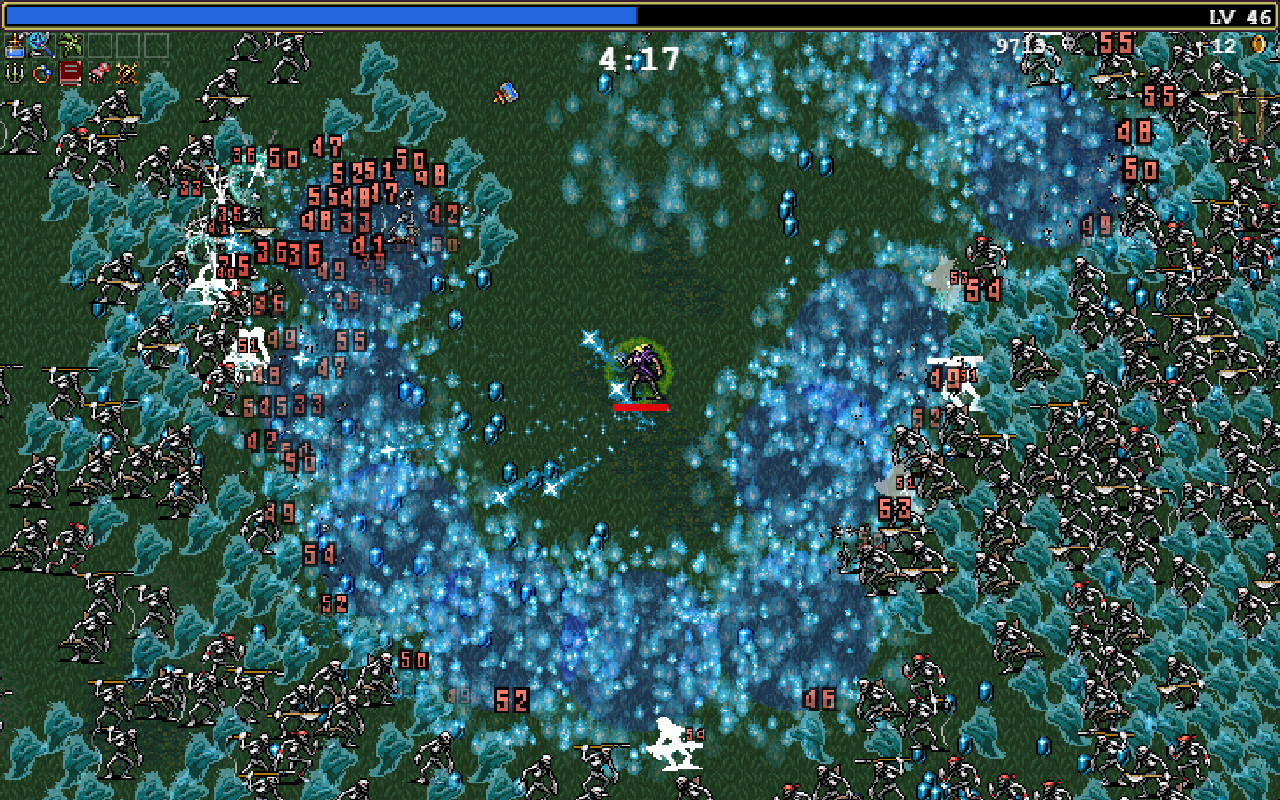 Let's call games in this genre horde games. It's not a bad name; you do indeed fight a horde, and it evokes the "survival horde modes" from older shooters; typically an ancillary game mode where players fight to survive as long as possible against impossible odds. How do we define a horde game? Allow me to suggest the following criteria:

The primary objective of each run is to survive rather than progress in the traditional sense. There are no checkpoints or levels, but rather different maps to play your run on. There are notable horde games where your run progress through stages, but the stages are weakly differentiated - not comparable to, say, moving to a new stage in Dead Cells. These games also typically have strong meta-progression elements through unlockable characters, stages, and powerups. I am loathe, however, to include meta-progression as a fundamental property of the genre, as one could remove meta-progression from all of these titles and be left with essentially the same game (and besides, what run-based game doesn't have meta-progression these days?).

A crucial element of the horde game is the randomization of power-ups. The classic setup sees you given three or four choices each level-up, with the possibility of re-rolling your choices at some cost. This is the primary roguelike influence, as the random variation forces players to adapt to each run and build a strategy around the random power-ups they have access to. This makes each run feel unique, adding a massive amount of replayability.

Finally, although a little less tangible than the other two criteria, is the idea of rapid growth in player power and enemy difficulty. Indeed, in the description of Vampire Survivors the dev states that the power-ups are there to "rapidly snowball" the player against the enemy hordes. In this way each run feels like a distillation of the power creep of a traditional RPG; you start the run extraordinarily weak, struggling to overcome groups of rats, bats, and slimes, and end the run as a demigod, vanquishing masses of enemies immediately as they appear.

Of course, there are other attributes of horde games. Aesthetically, they are generally top-down, two-dimensional, and somewhat visually simple to keep things manageable when the horde really ramps up.  Horde games are also (no doubt thanks to VS) priced extraordinarily affordably: typically 2-3$ USD. Indeed it's possible that, thanks to their high replayability, the Horde game genre offers some the highest average playtime-per-dollar in any genre.

Let's take a brief look at a few of the better genre offerings not called Vampire Survivors. 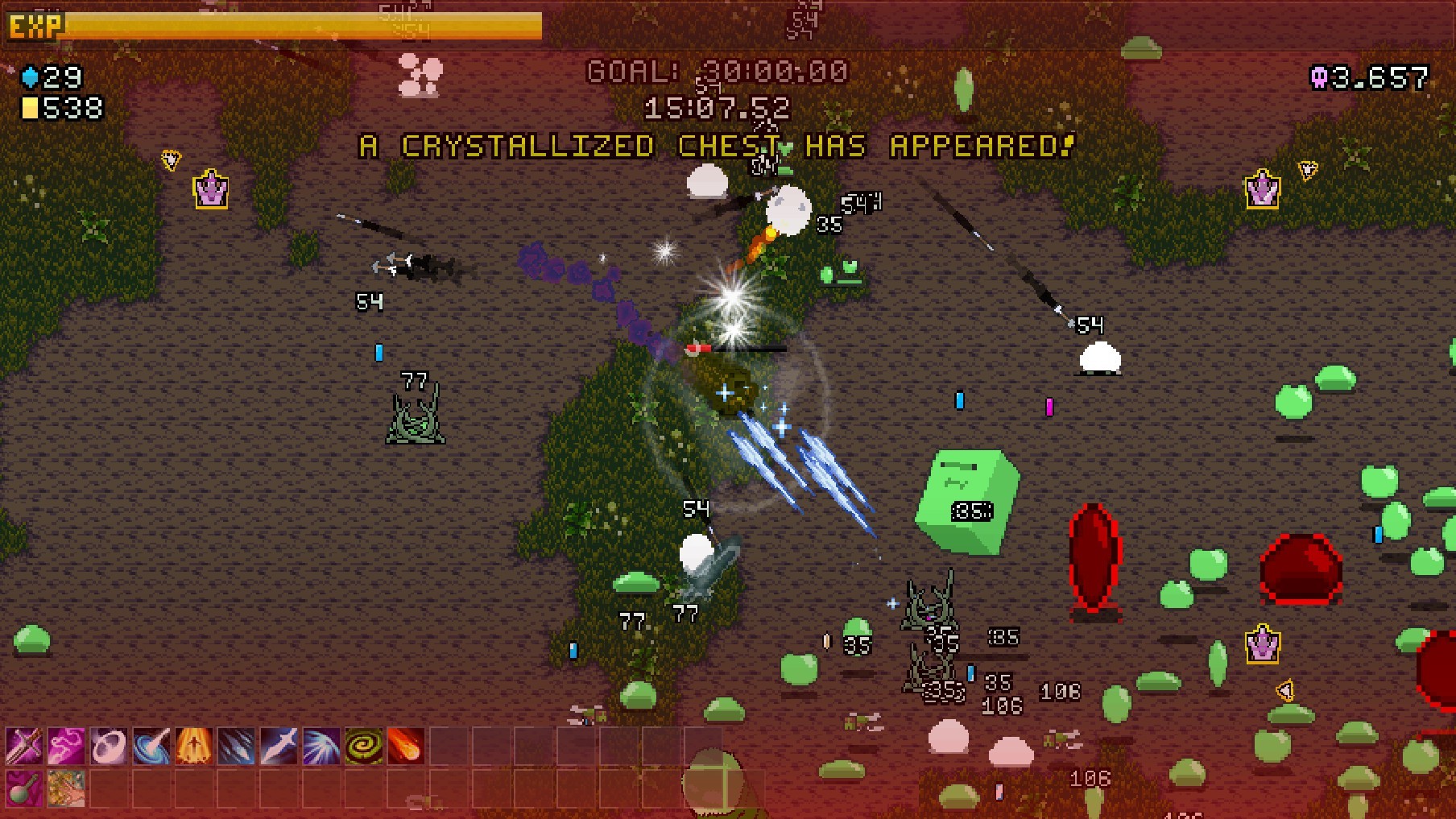 Nomad Survival sticks close to the horde game formula. It plays very similarly to Vampire Survivors, but feels more complex and nuanced. You can learn more active and passive skills and figuring out a good build is crucial to making it past the ten-minute mark. There are some excellent additions to the genre that Nomad Survival brings, including mouse control of your character, fine-tuning of run difficulty, pets, and "heritages" - powerful run modifiers that affect how you play. Find it on Steam.

Perhaps the most popular successor to Vampire Survivors is 20 Minutes to Dawn, which we have covered. The primary innovation here is to trade out the typically passive abilities (in the sense that they don't require targeting) with a twin-stick shooter style of gameplay. Upgrades improve the properties of your gun, turning your pea-shooter into a weapon of mass destruction. The dark, high contrast colour palette is nearly monochrome, and an appropriately foreboding synth soundtrack accompanies each run. Find it on Steam. 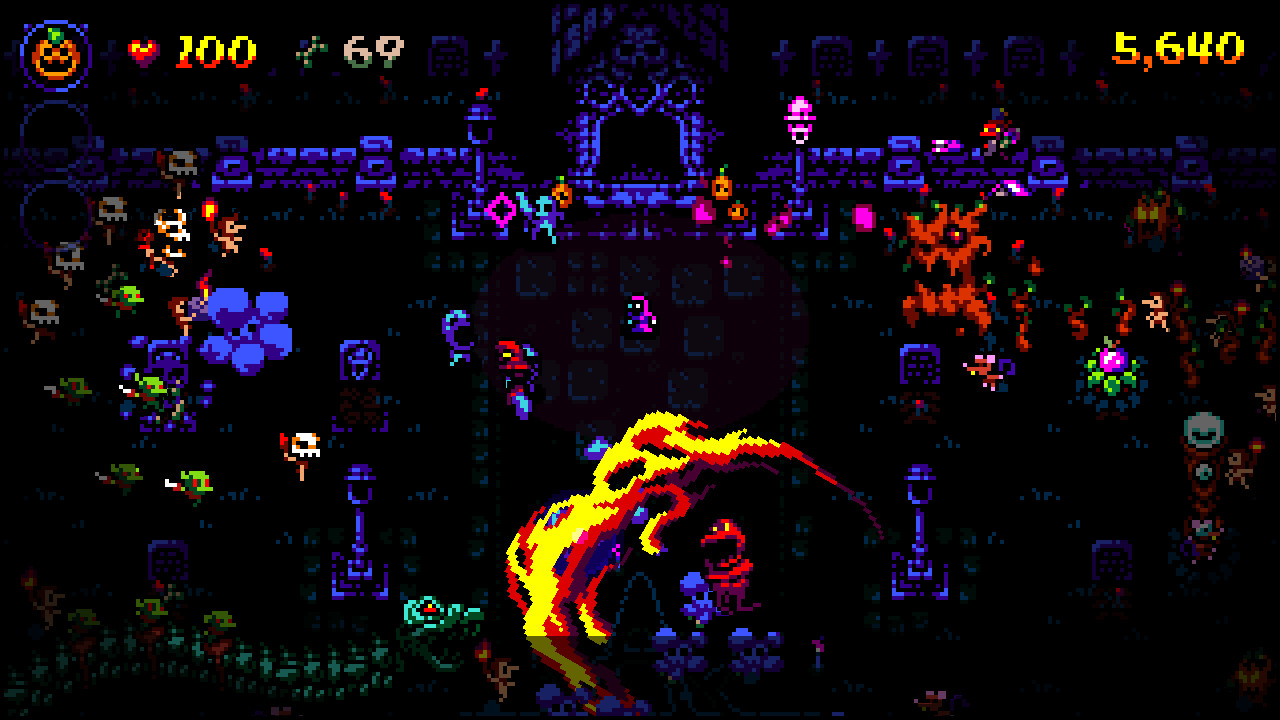 A particular favourite of GamingOnLinux, Boneraiser Minions swaps out the character's direct-damage abilities with the ability to raise a host of undead minions that defend your character. The visual aesthetic and audio are excellent, and the minions mechanic notably changes the gameplay to make for a more evasive protagonist than other horde titles. Find it on Steam.

Soulstone Survivors is a 3d entry into the genre, and a ton of fun. Rather than damage-on-touch, the game telegraphs enemy attacks with danger zones, which I found makes for more forgiving and enjoyable gameplay. There's a ton of status effects you can apply to enemies, and thanks to a great set of 3D animations the combat feels especially satisfying. Try the prelude free on Steam.

In addition to the games mentioned here, we can include Halftime Heroes, Grim Horde, Void Scrappers, Spellbook Demonslayers, and Neophyte as worthy genre entries. There are plenty of games that may not be horde games proper, but feature similar enough gameplay to warrant a mention. Just King and Gunlocked are two excellent games with horde-like gameplay, but stray from the formula in interesting ways.

So what do you think? Have a game to include or criteria to change in our noble pursuit of defining gaming's newest genre?

We do often include affiliate links to earn us some pennies. We are currently affiliated with GOG and Humble Store. See more here.
About the author - anewson

I'm a long-time Linux user and a long-time gamer, and have enjoyed combining these two hobbies over the past 10 years or so. When I'm not gaming or working, you can find me annoying my cat, watching movies, or raving about my 40% keyboards to anyone I can corner.
See more from me
Some you may have missed, popular articles from the last month:
34 comments
Page: 1/4»

View PC info
Sounds good, up until now I called them Vampslike

View PC info
Well, then would Risk of Rain (and the second) qualify?

Quoting: JpxeSounds good, up until now I called them Vampslike

Quoting: MayeulCWell, then would Risk of Rain (and the second) qualify?

Reminds me a bit of Ubermosh too :)

RoR is an interesting case, it hadn't actually occurred to me. It does more or less fit the criteria, although I think there's less choice and more luck in making your build. Runs also play out across several maps and it's a sidescroller; I'm tempted lump it in with Gunlocked as a liminal case?
1 Likes, Who?

View PC info
Don't forget long time classics like Phobia 3 (native Linux) and Kill Monty (this one is a Mac thing).
3 Likes, Who?

ShabbyX 3 Sep
View PC info
Crimsonland is a great game, only horde game I've ever played actually. Sucks that they didn't get the credit for inventing the genre
4 Likes, Who?

Quoting: ShabbyXCrimsonland is a great game, only horde game I've ever played actually. Sucks that they didn't get the credit for inventing the genre

Was thinking the same thing. One of the best co-op experience also for me.
0 Likes

raptor85 3 Sep
View PC info
Honestly the whole talk about horde games has me installing Ut2k4 again for some invasion, lol, I used to be able to play that for HOURS every night online.
2 Likes, Who?

It depends how strictly you define the genre. Vampire Survivors, specifically, is very different. It's not a twin stick shooter in any sense - weapons fire automatically and aren't aimable; whether you hit depends on placing your character in the correct place at the correct time. Also, as mentioned in the article, there are no distinct levels, but just a horde of enemies that get progressively bigger, more numerous, and more powerful.
4 Likes, Who?
1/4»
While you're here, please consider supporting GamingOnLinux on: