Continued from Part 18: Run Away and Join the Circus

Given the the company's current focus, the name Hyperion Entertainment seems an odd fit for the modern maintainer of AmigaOS, betraying its earlier status as an Amiga focused video game porting house. Attracted by the apparent success of Loki Software, Hyperion Entertainment also decided to expand into the Linux market, porting three games to the platform. One of their ports, that of SiN, to this day remains from them an elusive Linux exclusive.

Being given only a limited physical release in Europe, the Linux version of SiN is almost impossible to find today, so I would like to thank Nickolas Grigoriadis for supplying me with a copy. First developed by Ritual Entertainment for release in 1998 SiN is an ambitious if adolescent first person shooter with pretensions towards being an immersive sim, with level design that allows for a number of branching paths and a great degree of interactivity.

Adolescent applying to both the content of SiN, with its ridiculous comic book plot carried by the bosom of its femme fatale antagonist, and to how well baked the final product is. Notorious for its bugs SiN can also just feel a bit of a mess, being a headache for completionists with its multiple conflicting objectives. SiN plays more as an overwrought Duke Nukem 3D than something like Deus Ex, perhaps unsurprising given the input from the likes of Richard Grey and Charlie Wiederhold.

When the ingredients are fully cooked the game can be compelling, but you have to take the rough with the smooth. This also applies to the quality of the Linux port, with it being mercurial to get working. When I first installed the SiN demo on Red Hat Linux 7.3 it refused to recognize my libGL.so library, but in the year or so since it started working without a hitch. This carried over to when I installed the full version, but I still have no firm idea as to what changed.

SiN also has the most obnoxious retail key and disc checks of any Linux game I have encountered, with it just kicking you to the desktop with an stderr message when starting a new game if the CD-ROM is not mounted. Given how often the game crashed this did not fill me with confidence. In addition, I found that audio clips would cut each other off and would at times be distorted, with the worst offender for this being at the end of the optional "Missile Silo" level. 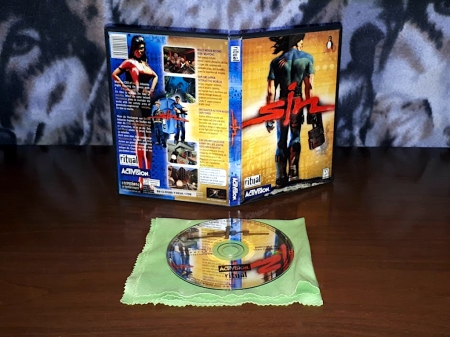 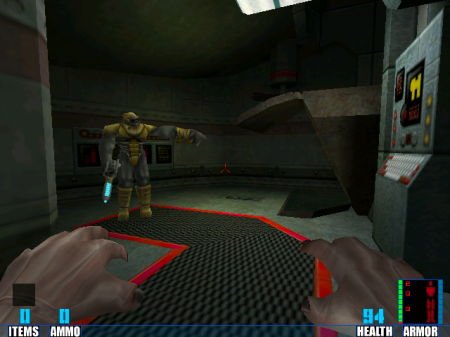 How much these problems had to do with the Linux port or the nature of SiN itself remains unclear, although I suspect it to be a combination of both. I found myself stuck for a time in that same level as it is the only instance in the whole campaign where the unadvertised inventory screen, accessible with the F11 key, is required in order to progress. SiN develops a habit of putting hurdles in your way, as an even more significant roadblock would arise from my going off the beaten path.

Since I had opted to destroy all the pumps in the optional "Geothermal Plant" level, this breaks the scripting when you are forced to go through the "Biomass Reclamation Center" later in the game, causing Darwin Chamber 3 in "Area 57" not to be accessible. Thankfully a fan patch exists to fix this specific issue, as otherwise I would have been forced to cheat, or load up a previous save and use the alternative path through the "Hidden Docks" instead.

This was followed by the next level "Xenomorphic Laboratory" producing broken save files, but once I got past this things proceeded fine up until the penultimate "Munt Phoenix" level. Here the scripting broke again, with the enemies standing stock still instead of attacking me, and mission critical items not spawning in. This I could resolve by just restarting the level, letting me go on to defeat the final boss, although the final MPEG cutscene aborted after a few seconds.

Performance wise Windows 98 averaged 40.7 FPS compared to 33.1 FPS under Linux using High settings, with both versions benefiting from turning Tessellation and Dynamic Lighting off. Doing so brought the Linux average up to 37.3 FPS, although this was still dwarfed by the 51.2 FPS seen on Windows 98 with the same settings. Windows benefits too by having access to the more polished Wages of Sin mission pack, which sadly was never ported over to Linux.

SiN would also later be adapted into an animated film, the inverse of what gave us the software I am to cover next. Plenty of games released for Linux could be considered adolescent or even childish, but software designed with actual children in mind can be few and far between, at least in the commercial or retail space. Time for some family friendly entertainment, even if I do come away from the experience questioning the sincerity of the publisher's intentions.

Carrying on in Part 20: The Antediluvian World

Hamish Paul Wilson is a free software developer, game critic, amateur writer, and farm labourer living in rural Alberta, Canada. He is an advocate of both DRM free Linux gaming and the free software movement alongside his other causes, and more information on him can be found at his icculus.org homepage where he lists everything he is currently involved in: http://icculus.org/~hamish
See more from me
Some you may have missed, popular articles from the last month:
19 comments
Page: 1/2»

A review of the game by Matt Matthews for Linux Games is archived here:
https://web.archive.org/web/20030219214553/www.linuxgames.com/?dataloc=/reviews/sin/

And my raw SiN timedemo data can be found here:
https://icculus.org/~hamish/dianoga/sin-timedemos.txt
4 Likes, Who?

mos 2 Jan
View PC info
Won't run for me on Ubuntu 22.04, Kisak Mesa.
Trying with the SDL 1->2 shim, maybe that's the problem.
Segfaults on starting a new game (or sooner..) smpeg is suspect, but Loki compat isn't so compat these days (outdated as well).

The game is damn near-revolutionary. Starts out kinda slow tho. It's certainly more than it seems on the surface.
0 Likes

Lightkey 2 Jan
View PC info
This sounds much buggier than I remember it but then, I was happy if a title ran at all back then.
I must say I'm surprised I didn't hear of the next title before (I think I found the right one searching the interwebs) but that's always welcome.
0 Likes

Quoting: LightkeyI must say I'm surprised I didn't hear of the next title before (I think I found the right one searching the interwebs) but that's always welcome.

It pays to sift through eBay listings sometimes.

I have another four articles pretty much drafted so I will be going back to a weekly schedule for these at least until February comes around. We'll see if I can match what I managed this time last year.
5 Likes, Who?

Quoting: LightkeyI must say I'm surprised I didn't hear of the next title before (I think I found the right one searching the interwebs) but that's always welcome.

It pays to sift through eBay listings sometimes.

I have another four articles pretty much drafted so I will be going back to a weekly schedule for these at least until February comes around. We'll see if I can match what I managed this time last year.

Okay, now you've lost me again, guess it is a different title.
0 Likes

Quoting: LightkeyOkay, now you've lost me again, guess it is a different title.

Enjoy the mystery. All will be revealed!

Thank you for the article.

I used LIFLG to play Sin.

Thank you for the information about this patch.

I didn't have issues with any save games in Sin on Ubuntu 20.4. However, the final cutscene didn't work, so I had to use VLC to watch it.

There is a terrible bug which is caused by the different location of a few files in one of pak files. The game crashes before the underwater pass part 2, and I just copied few files from pak to the directory with Sin. In this case, I didn't have to cheat to finish Sin.

You forgot to mention that Sin was ported to Linux PowerPC.

Hyperion didn't release any patches for Sin and Shogo because low sales were a big issue for them. Hyperion ported these games to Linux, but they blamed a Linux publisher Titan Computer for low sales. I'm not sure which company you mentioned at the end of this article.
0 Likes

Quoting: gbudnyYou forgot to mention that Sin was ported to Linux PowerPC.

Not so much forgot as it was not directly relevant in my case, but it is still cool to know for those with an interest in such hardware. Same with a lot of the Loki Software games.

Considering I already had to install SiN on Windows 98 for the benchmarks I just went ahead and started playing Wages of SiN from there. I managed to find a loose Wages of Sin jewel case at a Goodwill while thrifting a few years back.
0 Likes
roel 2 Jan
I also have this game. I never finished it because it had a lot of issues. I should try it again, maybe with the script from liflg: https://github.com/liflg/sin_1.10-english_x86
I always hoped they would opensource the engine so the game would get a second life.
1 Likes, Who?
gbudny 2 Jan
I forgot to mention that when I solved the issue with missing files in one of the packs something funny happened. The game doesn't crash in this area, and is a weird coincidence. On the same level, J.C. said "What happened Blade? The signal is perfect again."
0 Likes
1/2»
While you're here, please consider supporting GamingOnLinux on: