Atlantis: The Underwater City is an animated film released in 2001 directed by Alessandro Bulath and distributed by Sterling Entertainment Group under their UAV brand. The cynic in me suspects the film was only produced to sow market confusion in the hope of cashing in on some of the hype surrounding the release of Atlantis: The Lost Empire that same year, which was a very common practice for budget animation studios during the Disney Renaissance.

Few of those knock off straight to video movies ever got the companion CD-ROM treatment, but it was quite common for legit Disney films to receive them at the time. Sold as interactive storybooks, these took the form of narrated picture books which went over the story from the film while allowing for a certain degree of user agency, typically by allowing a selection of quirky animations to play by clicking around with the mouse.

UAV must have wanted in on this craze as well, and so Atlantis: The Underwater City - Interactive Storybook was born. Even when compared to the source material it is clear that little effort was put into its production, with bare bones animation and crude art direction marring a title marketed as transporting children to a memorable fantasy world. About the only reason to save the software from the bargain bin that it was intended for is the boast of Linux support.

Inside the jewel case the booklet instructs Linux users to mount the CD-ROM, change to the directory, and then launch the Atlantis_for_Linux.sh shell script. This will probe for a number of common Linux web browsers of the time including Mozilla, Konqueror, Galeon, and Netscape, before attempting to launch the browser.html web page located on the root directory of the CD-ROM. A nice effort, but they could have just called the $BROWSER global variable instead.

Unfortunately the developers forgot to specify the present working directory, leaving the script to just fall flat on its face. Adding $PWD in the path before invoking browser.html would have made all the difference, a flaw which should have been obvious long before they burned the shell script to the CD-ROM. Thankfully the README.html page does at least include a working link for launching on other computer systems such as Linux and BeOS, so that is something. 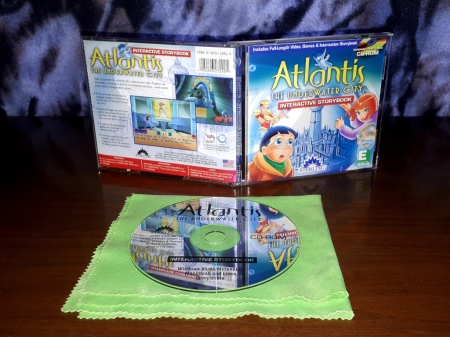 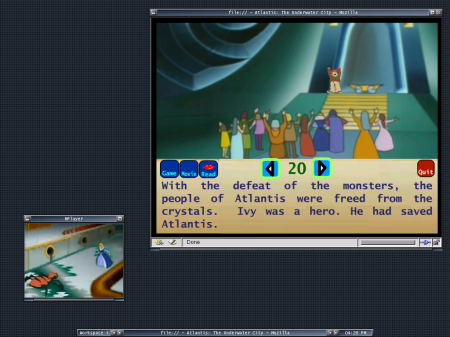 The Interactive Storybook functions through the magic of Macromedia Flash, which I installed for use with Mozilla using the flash-plugin-7.0.69-1.rh7.rf.i386.rpm package from freshrpms. This allowed the storybook portion to work, but some of the included minigames proved to have rendering errors, with the Atlantis Bricks and Atlantis Blocks games both being crippled to the point of being unplayable. I suspect this is due to incompatibilities between Flash versions.

Alongside Macromedia Flash the Interactive Storybook also depends on Apple QuickTime for playing the full movie, with it just being a dead link for me on Linux. Of course, there is nothing stopping you from searching the data directory on the CD-ROM for the atlantis.mov file and playing that through your favourite Linux movie player of choice. The README.html page suggests using XAnim but I settled for watching the bitcrushed file through MPlayer instead.

At this point, playing the Interactive Storybook on Linux is not far removed from having no support for the platform at all. While it is nice that they acknowledged that everything they were doing could in theory be done on Linux, very little effort was put into making it be a smooth experience in practice. I am reminded of the demands by some to have more DOSBox wrappers available for Linux on storefronts, when without proper care they could easily wind up being like this.

Having now gone to the trouble of finding and installing Macromedia Flash on Red Hat Linux 7.3 it might be an idea go back and explore some higher quality Flash games and amusements, as there are a number of them that I do have some actual nostalgic attachment towards. For the moment I think I have gotten my fill by messing about with this however, not helped by the fact Macromedia Flash runs a little heavy on Dianoga.

Although it appears to have never been mentioned on their website, the credits reveal that the developer of the Interactive Storybook was none other than BlackHoleSun Software, a familiar name to those in the Linux gaming scene at the time. As one of the first Indie studios to truly embrace cross-platform development, even the mention of BeOS in the README.html page makes a lot more sense now, given who we are dealing with.

Carrying on in Part 21: Fluffy Bunnies

Hamish Paul Wilson is a free software developer, game critic, amateur writer, and farm labourer living in rural Alberta, Canada. He is an advocate of both DRM free Linux gaming and the free software movement alongside his other causes, and more information on him can be found at his icculus.org homepage where he lists everything he is currently involved in: http://icculus.org/~hamish
See more from me
Some you may have missed, popular articles from the last month:
8 comments

Lightkey 9 Jan
View PC info
Okay, finally something so obscure that I haven't even heard of it. Although considering it's a Flash game, I don't feel too bad for missing out. I actually used Galeon for a time because it was more responsive on my poor K6-2 400 than plain Mozilla. Good (bad) times.
2 Likes, Who?

It's still an interesting addition to Linux gaming history, but if you really want Interactive Storybooks for your children I'd recommend to play the games from Humongous Entertainment or Living Books using ScummVM...
3 Likes, Who?

Quoting: IggiI should emphasize that the quality of the video (when watching the complete movie) is just abysmal

Someone uploaded the MOV file to YouTube, and the comment section is both endearing and baffling; all these people being so glad to have finally found this movie again. Nostalgia is a hell of a drug...

Quoting: IggiIt's still an interesting addition to Linux gaming history, but if you really want Interactive Storybooks for your children I'd recommend to play the games from Humongous Entertainment or Living Books using ScummVM...

Yep, I remember the Drayton Valley Public Library had CD-ROMs of Ruff's Bone, Arthur's Teacher Trouble, as well as Star Trek: Voyager - Elite Force to borrow when I was a kid. What a great time to be alive.

View PC info
I remember the Disney interactive storybooks; I never owned any of them, but I remember thinking that they were novel at the time - I don't think that I was wrong to pick up Timon & Pumbaa's Jungle Games instead, though! (I need to see how that runs under Wine/Proton sometime, come to think of it.)

That said, this one reminds me more of the Dingo Pictures/Phoenix Games/Midas Interactive team-ups, instead.

Fun reading as always, Hamish - and it was neat to see something totally different to the norm this time, too.

Quoting: PenglingI don't think that I was wrong to pick up Timon & Pumbaa's Jungle Games instead, though!

I cut my teeth on a keyboard using Disney's Adventures in Typing with Timon & Pumbaa back in the day.
1 Likes, Who?

Quoting: HamishI cut my teeth on a keyboard using Disney's Adventures in Typing with Timon & Pumbaa back in the day.

I'm a self-taught typist, but honestly if I'd've ever seen that one, I probably would've grabbed it. Timon and Pumbaa, you learn to love 'em.

Quoting: IggiI should emphasize that the quality of the video (when watching the complete movie) is just abysmal

It's still an interesting addition to Linux gaming history, but if you really want Interactive Storybooks for your children I'd recommend to play the games from Humongous Entertainment or Living Books using ScummVM...

Speaking of, they finally announced public testing for the Adibou 2 games by Coktel Vision (Adiboo in English, ADI Junior in German) a month ago. One of the most popular edutainment series for children in the 1990s, based on the Gob engine, originally made for Gobliiins and other adventure games. I found a huge amount of those at jumble sales and some include older Coktel Vision games.
Edit: forgot link.

View PC info
Well at least on my Debian 12 install the $BROWSER variable is actually empty so I'm not sure whether this is a good all-around solution.
0 Likes
While you're here, please consider supporting GamingOnLinux on: