As was true for many people at the time, some of my first real experiences of using Linux as a child came through the use of Knoppix, one of the first distributions to popularize the use of Live CDs. This allowed me to explore a wide swath of Linux applications while not disturbing the Windows environment I needed for school at the time. One of these was a role playing game which I recall I never got to work well, but lingered on in my imagination regardless.

As an adult I can recognize this as Falcon's Eye, a GUI for the venerable NetHack released by Jaakko Peltonen in 2001. The SourceForge page for the game is still online, but only has source code available for use on Linux machines, the building of which is a byzantine task given the variety of build modes. By trawling the Wayback Machine I was able to find links to RPM packages for the last stable 1.9.3 release already built for Red Hat Linux, making installation far simpler.

Even then setting up the game takes the form of modifying configuration files, either by editing jtp_options.txt located in the /usr/lib/games/nethackdir/config directory, which controls such things as graphic and sound modes, or by fiddling with the local ~/.nethackrc file for options specific to your personal user account. Falcon's Eye started in an oversized 1024x768 window on first launch, making consulting the jtp_options.txt file beforehand a good idea.

The default option of playing the MIDI soundtrack through timidity also caused Falcon's Eye to hang at times with a black screen. Changing to using the MIDI sequencer device of my sound card by using playmidi solved this issue and also gives the music a nice AdLib feel, but the cleanest rendition of the music is by use of the MP3 files through the mpg321 player, although doing so takes less advantage of my Sound Blaster 16 hardware.

As a NetHack novice the game comes with a steep learning curve, with the most important lessons for me being that you can move in diagonal rather than just cardinal directions, and that locked doors and chests can be kicked, rather than just picked or unlocked with keys. I also found myself hitting constant dead ends until I discovered that hidden passages and doorways could be revealed by pressing the "S" key. Learning how to fight at range is worthwhile as well. 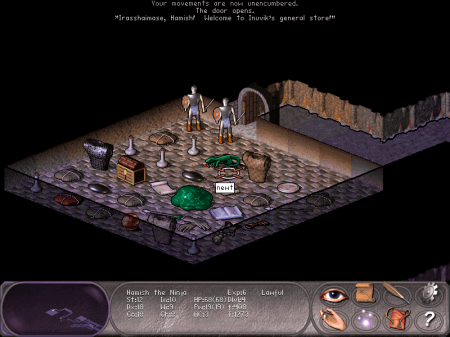 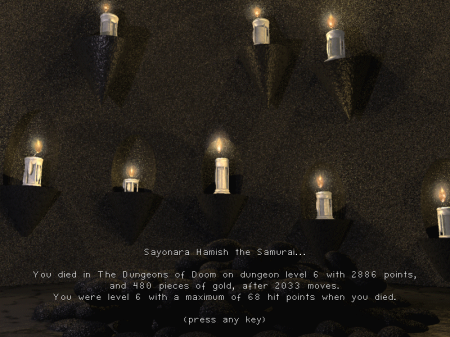 In terms of mechanics the most significant change Falcon's Eye makes to NetHack is having the game now be mouse driven, necessitating the addition of a sometimes overeager pathfinding system whenever I misclicked. Graphics are iconographic, being static replacements for the original ASCII characters, with no animation and often limited variation. At times I found myself being mauled by a jackal that I thought was just my tame little dog.

The quality of the artwork that is there can not be disputed however, being an appealing and consistent set that does do a lot to bring the Mazes of Menace to life. In tackling those mazes, I have found that playing as a Samurai works well for me, not that it stopped me from succumbing to many a painful death. My most successful run so far saw me be felled by a fire ant on dungeon level six, after it ignited my potions and left me to suffer a slow agonizing burn.

Roguelike concepts such as permadeath and procedural generation baffled me as a child, and even today leave me with a grudging acceptance that I am unlikely to ever beat the game. In fact, my first proper dive into the genre would not come until I played the far more accessible Dungeons of Dredmor about ten years later, itself being the brainchild of former Loki Software programmer Nicholas Vining. It may be heresy, but for me, being able to save made all the difference.

Since then I have at least gained experience in a number of contemporary Dungeons & Dragons licensed games, giving me a better handle on some of the fantasy terminology and quirks used in Falcon's Eye, such as how lower armour class values are actually better than higher ones. NetHack is a hodgepodge of popular culture milieu, from discovering Hobbits running around searching for the One Ring, to including an entire Tourist role as some kind of elaborate joke.

Further work on Falcon's Eye stalled out by 2005, with later Linux Game Publishing alumnus Clive Crous forking the project into what would become Vulture, now purchasable on both itch.io and Steam, albeit with the source code still being freely available. No Arch Linux packages seem to exist, and the itch.io page only has Windows binaries available. I could compile Vulture from source, but if I am to go through all that trouble, I might as well build something fresh instead.

Hamish Paul Wilson is a free software developer, game critic, amateur writer, and farm labourer living in rural Alberta, Canada. He is an advocate of both DRM free Linux gaming and the free software movement alongside his other causes, and more information on him can be found at his icculus.org homepage where he lists everything he is currently involved in: http://icculus.org/~hamish
See more from me
Some you may have missed, popular articles from the last month:
7 comments

View PC info
The RPM packages I used can be downloaded here:
https://icculus.org/~hamish/dianoga/nethack-falconseye-1.9.3-rpm-packages.tar

The Falcon's Eye SourceForge page can be found here:
http://falconseye.sourceforge.net

An article on free games including Falcon's Eye by Mike Diehl for Linux Journal can be read here:
https://www.linuxjournal.com/content/more-free-games-linux

And an article exploring NetHack in general by Marcel Gagné for Linux Journal can be read here:
https://www.linuxjournal.com/article/8491
2 Likes, Who?

xavi 24 Jan
View PC info
Nethack is very good, but very though, you need lot of knowledge and time. In the other hand Brogue is very nice and much more easy to get into and enjoy. In a long afternoon you can finish Brogue (after months of learning), but Nethack needs LOT more time to play and to learn. On the other hand there is people who know specific exploits to finish Nethack fast.

About Brogue,with the info: How to play and Tips, you're supposed to know enough.
https://sites.google.com/site/broguegame/?pli=1

And in Brogue you can know any monster fact just pressing a key, in the other hand on Nethack you need to look to tables of info on the monsters.

View PC info
For me the pinnacle of roguelikes will always be Dungeon Crawl Stone Soup. The wiki has nice guides, it has nice visuals, it's a true roguelike and a lot of fun.
It's also really difficult. I've played many hundreds of runs and only completed the game three times but it's always good for a quick round.
0 Likes

QuoteNetHack is a hodgepodge of popular culture milieu, from discovering Hobbits running around searching for the One Ring, to including an entire Tourist role as some kind of elaborate joke.

The tourist is another fantasy reference. Based on the Twoflower character in the Discworld series.
1 Likes, Who?

Lightkey 24 Jan
View PC info
As a child? Way to go, making me feel old from the first line.

Also at the end, Shirley continuing in Part 23?
1 Likes, Who?

Quoting: whizseThe tourist is another fantasy reference. Based on the Twoflower character in the Discworld series.

I suspected as much, but at the risk of sounding heretical again, I only really know of Terry Pratchett by reputation. Good to have that confirmed.

Quoting: LightkeyAs a child? Way to go, making me feel old from the first line.

Quoting: LightkeyAlso at the end, Shirley continuing in Part 23?

Ah yes, that's the problem with laying down track while the the train is oncoming. Fixed now.

Also ended up having to publish the article far later than intended as I was stuck waiting to see a doctor for my throat infection and my mobile data failed me. I'll muddle through somehow.
1 Likes, Who?
gbudny 25 Jan
Thank you for the last three articles.

I have to admit that I have never played NetHack, which is the popular game.

Maybe it will be useful for users want to play classic games for Linux.


Last edited by gbudny on 25 January 2023 at 10:02 pm UTC
0 Likes
While you're here, please consider supporting GamingOnLinux on: