Here's one from a while ago we missed completely! Little Devil Inside [Official Site] is a 3D action and adventure RPG and it's coming to Linux. It was funded on Kickstarter back in 2015 and it seems development is taking a little longer than expected, but it sounds pretty positive right now.

On their Kickstarter, they said this:

We are pleased to announce that the game will be released(aside from PC, Mac & Linux as you all know) for PS4 and XboxOne as a Third Party which means we will be able to release it across these platforms concurrently.

On their official site, they even have a tux icon to indicate Linux support very clearly shown next to the Windows icon too, so it looks pretty solid that it's coming.

Here's a recent teaser video they put up, which really is looking rather nice: We have a lot of survival and exploration games now, but something about this look quite different. It's not going to be a basic survival game like Rust of ARK, but more along the lines of an action RPG with a big world where you're able to invite people in to play with you, so a little like Borderlands.

Little Devil Inside is a truly engaging 3D action adventure RPG game where you are thrown into a surreal but somewhat familiar setting with humans, creatures and monsters to interact with, learn and hunt - journey, survive and discover the world that exists beyond.

This game is not just about killing arch-demons and saving the world. Take in the atmosphere and live a realistic life in an unrealistic world. This is a game that tells stories about people with 'unusual' jobs such as hunting monsters and what happens in their everyday life doing so.

No word on a release date yet, but this is one I'm certainly going to be keeping an eye on. Absolutely love the visual style, the animations look fantastic and the UI looks pretty interesting.

Thanks for the tip ziabice!

View PC info
Holiest of holy cross hung crap! That is perhaps the all time best looking survival game evah! (I shall now set about forgetting it entirely because I don't think I could survive the heartbreak if it turns out later that it won't be coming to Linux after all.)
1 Likes, Who?

Quoting: NanobangHoliest of holy cross hung crap! That is perhaps the all time best looking survival game evah! (I shall now set about forgetting it entirely because I don't think I could survive the heartbreak if it turns out later that it won't be coming to Linux after all.)

This was the answer I got asking them about Linux support, back in 2015, before they were even funded: 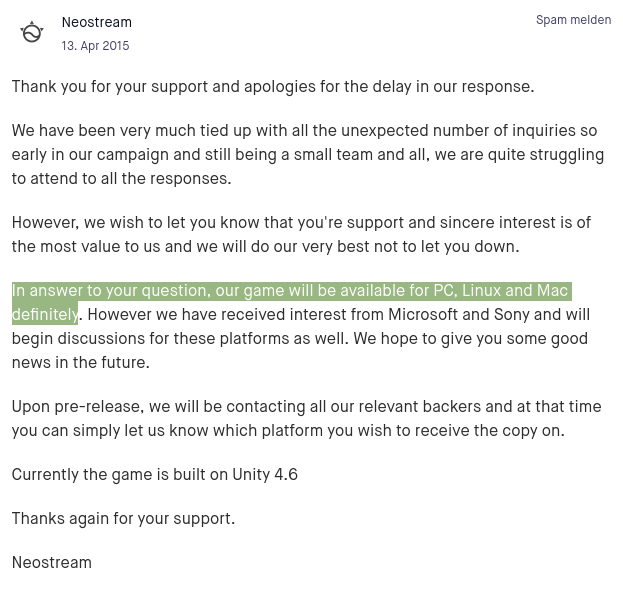 View PC info
@Kellerkindt
It's the sentence just after that that worries me. Now shush! You're interrupting my forgetting! ;)
0 Likes

View PC info
Wow, lovely artwork! Fantastic. Obviously they got a good AD on their team!
1 Likes, Who?

View PC info
Hahahahaha this has made my day xD Very interested! :)
0 Likes
While you're here, please consider supporting GamingOnLinux on: