Here's a quick look at some Linux gameplay: 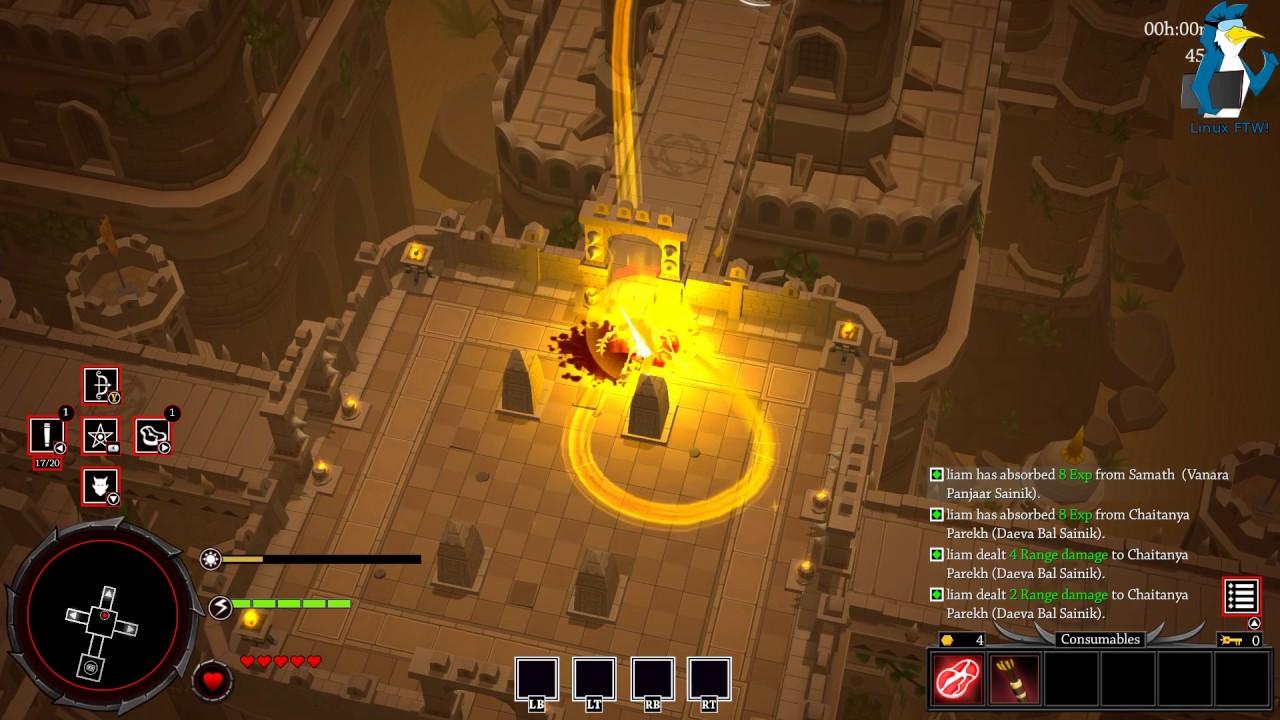 YouTube videos require cookies, you must accept their cookies to view. View cookie preferences.
Accept Cookies & Show   Direct Link
I must admit, I was a little wary going into this one, as looking over user reviews of which there aren't many, but one stuck out in particular. A user claimed on Steam (here) that there were fake reviews posted and it turns out it was true. The developer commented to state it was a publisher decision to do it and it has been removed. I don't like that, I don't support that and fake reviews annoy the crap out of me. Even with it being a publisher decision, the developer removing forum posts talking about it reeks of something foul here.

That said, I have given it a try and it is surprisingly good. I'm a pretty big fan of hack 'n' slash titles that throw in some RPG aspects and we don't have too many quality titles like it to play on Linux. The game is good enough for me to want to keep going back to it, so that says something about it.

It feels a little like Bastion in the controls and it's very responsive. I tested it using the Steam Controller with SC Controller hooked up and it works perfectly.

As you progress you earn XP for unlocking skills. The skill tree in Asura is randomised, so each run through will give you the possibility to unlock different skills, which has helped my numerous runs all feel rather different. Some of the skills are really good too, like unleashing a whirlwind or being able to recover some health back.

Skills aren't the only thing randomised, the level layouts are too. One thing I particularly like is that defeating a boss doesn't force you into the next level, since you might end up finding a boss quite early on due to the random generation. You can choose to go to the next level when you're done exploring your current location.

It's certainly not an easy game, since every main action you take reduces your stamina, so if you do too many attacks and dodges you're left wide open unable to attack. Enemies have a weakness to a particular weapon too, so melee enemies are weak against ranged attacks and ranged enemies are weak against melee. This gives the game another good bit of variety and challenge, since ammunition is limited for your bow you could find yourself in a bit of a pickle if you end up in a room full of melee enemies or a mainly melee boss.

Issues
One issue I did encounter in the game was that a spell (I don't remember which exactly) didn't work, it froze the game input to that spell and I had no option but to quit as the spell just wouldn't fire. It did only happen once though.

Another issue is that it is a Unity game, so it has poor multi-monitor support. It starts in the wrong resolution, but luckily their in-game resolution picker worked fine to reset it.

Ultimately the choice is yours here. While I like the game quite a lot, the developers attitude towards hiding criticism of the review issue and their publisher apparently being behind it, it's hard to outright recommend. Article taken from GamingOnLinux.com.
Tags: Action, GOG, Review, Roguelike, Steam, Unity | Apps: Asura
6 Likes
Share

We do often include affiliate links to earn us some pennies. We are currently affiliated with GOG and Humble Store. See more here.
About the author - Liam Dawe
I am the owner of GamingOnLinux. After discovering Linux back in the days of Mandrake in 2003, I constantly came back to check on the progress of Linux until Ubuntu appeared on the scene and it helped me to really love it. You can reach me easily by emailing GamingOnLinux directly.
See more from me
Some you may have missed, popular articles from the last month:
The comments on this article are closed.
8 comments
no_information_here 14 Apr, 2017

Looking at the steam reviews, there is another one that gives more info on the kerfuffle:

QuoteControvery
So Asura is having a bit of the controversial launch: there's one negative review that is calling out the developers on dishonest practices (leaving fake reviews). The developers, on the other hand, are saying that their Chinese publisher left the reviews and they've already asked him to leave that practice, apologizing for this behavior. Here's the reply from one of the developers:
"We are a two person team from India who have made the game and let me assure you that we would never ask anyone to review or promote the game in a misguided manner.

Now in this particulare case, we have a chinese publishing partner who is handling the chinese version of the game and it was one their members who did this.

We sincerly apologize on behalf of them."

Dispute
Nonetheless, the damage seems to be done: there's suspicion all around and all the positive reviews are looked at with doubt. Essentially, it also affects this review. To address this: I welcome the fact check and critical approach, so if you are wary of this review too - that's totally cool. I just don't think that we need another witch-hunt. That's only one man's impression: I'm going to evaluate the game by its qualities and describe why I think it is good. If you disagree - make sure to leave a comment and let's have a weighted discussion.

I am very interested in this game, I like that it seems to be inspired by Rig Vedic Hinduism & the culture of the Indian subcontinent; but I am wary of purchasing it because one of the reviews I read seemed to imply that the game is optimized for a game pad controller. To anyone who owns this, is it possible to easily & fully remap the controls? By that I mean I prefer to play ARPGs (Diablo-clones) similar to default keyboard & mouse setup for Torchlight 1 & 2 or Neverwinter Nights 1.
1 Likes, Who?
JudasIscariot 15 Apr, 2017
View PC info

Quoting: ValamirCleaverI am very interested in this game, I like that it seems to be inspired by Rig Vedic Hinduism & the culture of the Indian subcontinent; but I am wary of purchasing it because one of the reviews I read seemed to imply that the game is optimized for a game pad controller. To anyone who owns this, is it possible to easily & fully remap the controls? By that I mean I prefer to play ARPGs (Diablo-clones) similar to default keyboard & mouse setup for Torchlight 1 & 2 or Neverwinter Nights 1. The mouse controls in the screenshot are not rebindable, everything else is, however.
1 Likes, Who?
ValamirCleaver 15 Apr, 2017

Quoting: JudasIscariotThe mouse controls in the screenshot are not rebindable, everything else is, however.

I appreciate you taking the time to respond to my post. Do you own it or have you otherwise played the final release? I don't like playing RPGs or ARPGs where the keyboard has to be used for movement and the mouse has to be used for camera control if one is not using a game pad. I don't want to waste money purchasing a game that I'll get frustrated & I won't play because I can't fully remap the controls the way I would like them.

Quoting: JudasIscariotThe mouse controls in the screenshot are not rebindable, everything else is, however.

Do you own it or have you otherwise played the final release?

Yes, I have it and yes, I've played the final release. The screenshot is from the GOG version of the game :)

Do note that I work for GOG, just disclosing that in case you didn't know :)
0 Likes
ValamirCleaver 15 Apr, 2017

Quoting: JudasIscariotDo note that I work for GOG, just disclosing that in case you didn't know :)

Oh.. the "Thievin' Bastard", I didn't recognize you without your avatar. So does that mean if one is using a keyboard & mouse the game controls like Torchlight 1 & 2? If so I'll buy it right now.

As for the developers, I had a great experience trying to get my Steam controller working -turned out to be my controller, not their game, but that didn't stop one of the Devs pm'ng me on Discord to talk me through the log upload procedure and then help troubleshoot the issue. Great service!

View PC info
I've played this for about two hours so far and despite me being a bit clumsy with the controls, I am really enjoying it. My only criticism would be that the levels seem to be a little short. I'd like more opportunities to buff my character before I go into battle with the boss!
1 Likes, Who?
While you're here, please consider supporting GamingOnLinux on: