A look at Solar Division, a newer Tower Defence game on Steam 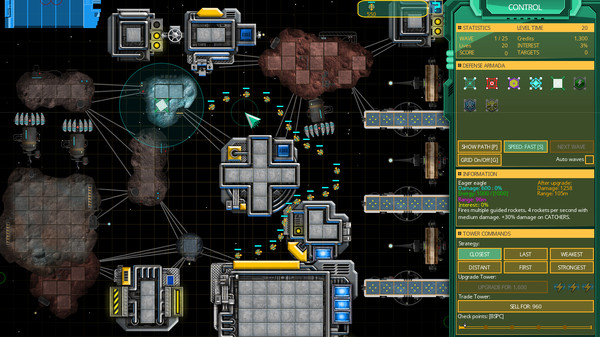 I managed to grab a key to Solar Division thanks to the publisher, so I decided to check out this interesting looking Tower Defence game to see if it's worth your tux bucks.

I love Strategy games and Tower Defence games rather a lot, so I always jump at the chance to play them. Especially when the setting is in space, as I love all things to do with aliens and spaceships.

I don't mind the simple graphics, as I always value gameplay over graphics. Sadly, I haven't really found Solar Division to be all that fun.

You're tasked with commanding the defence of different space stations with your towers, drones, and whatever else you pick out of the given towers for each scenario. The levels are all pretty small, but you do have a few options enabling you to replay the missions. You could reverse their path, give yourself limited towers or do an endless mode for some examples.

I do love the variation in the towers, all have their strengths and weaknesses. Pairing up different towers next to each other will give you certain advantages against the different waves of enemy ships that come along.

The upgrade system is also pretty decent. You can upgrade your towers for increased range and damage which can come in useful when the later waves of alien ships come along. It can end up making some towers rather overpowered though.

I'm going to be brutally honest. I found Solar Division to be far, far too easy playing it on the classic setting. Every game I've played so far has seen me pop down a couple towers, turn the game speed up and enable auto waves so I don't have to keep clicking next wave. I watch as my random placement annihilates every single wave without an issue and proceed to the next level. I haven't once needed to upgrade a tower, sell a tower for funds or really do an interacting with the game other than the initial tower placement.

Later levels do get a little bit more difficult once the bigger alien ships start appearing, but the most interaction I've had to do is to place down an extra tower or two. I then continue to just sit and watch and not really do much else. There has been only one level in a playtime of over 2 hours that I had to repeat.

Apparently I use rocket towers a lot, as I gained an achievement for launching over 1000 rockets, heh. That leads me to another point, the explosions are so small and boring they really needed to beef up the excitement from blowing things up in the game.

I don't hate the game at all, but I think the difficulty needs some real tweaking as it's just too easy to be enjoyable. I got so bored at times I wished there was an additional speed setting so I could power through the levels without having to watch the aliens futile attempts to pass my towers.

Overall: It needs higher difficulty (or at least introduce some difficulty levels), some better explosions and just have more effects going on. Those key things would make it a lot more interesting to play. It was reasonably relaxing, but it shouldn't have been and that's my issue with it. Article taken from GamingOnLinux.com.
Tags: Initial Thoughts, Steam, Strategy, Tower Defense
0 Likes
Share

Looks like you haven’t reached station 5 … 9. Yes many of the initial levels are too easy. But some later ones are quite hard.
But yes for many (even hard) levels you start by placing a couple towers, hit fast forward, and wait…
0 Likes

View PC info
I got to the eighth level. So second level of the third commander/sector whatever.

Edit: Just did a quick blast through to another commander/sector and still finding it quite easy.


Last edited by Liam Dawe on 3 May 2016 at 4:53 pm UTC
0 Likes
While you're here, please consider supporting GamingOnLinux on: