A look over the ProtonDB reports for April 2019, now over forty thousand reports logged

ProtonDB, the unofficial tracker for checking the status of Windows games played on Linux through Steam Play has another data-dump available. Here's a look for April 2019. Note: The data dumps often include a few reports past the end of the month, which aren't counted as we cover them in the next set of reports as we cut-off what we look over at the end of April.

Firstly, ProtonDB has hit a bit of a milestone recently with it hitting well over forty thousand reports from users. That's crazy but it goes to show just how popular Steam Play is becoming in what's a relatively short amount of time. Steam Play isn't even a year old yet!

As usual, let's start with a quick look at how many reports have been coming in per month: 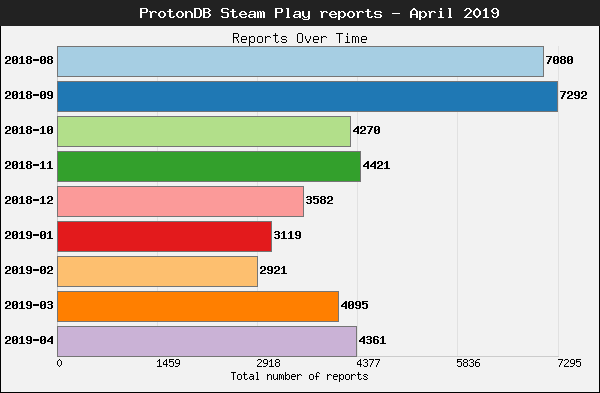 Interesting to see quite the reversal there, with it starting to fall-off from November and now we're seeing a nice up-tick in the reports once again. Likely due to new releases of Steam Play's Proton and new game releases recently.

That only tells us the amount of reports though, what about the status of the reports being sent to ProtonDB through April? Here's a look at that too:

That's a pretty nice picture, tons of Platinum reports continuing to show how well Steam Play as a whole seems to be doing. Let's look in a bit more detail now, what actual games have seen the most reports in April, to give us an idea of what Windows games played on Linux are currently of interest. 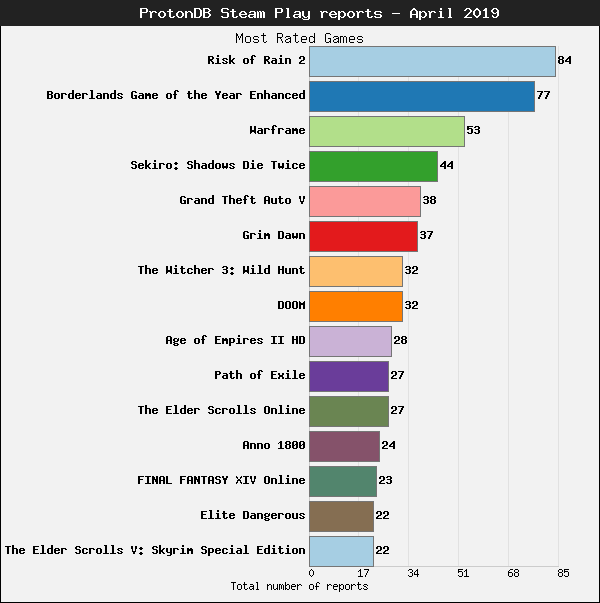 No real surprises there, Risk of Rain 2 being a recent release that I also covered in early April. Some of the usual suspects remain popular titles people are re-testing often like Grand Theft Auto 5 and Sekiro continues to be very popular. However, that's only the number of reports. Let's take a dive into what games are getting Platinum reports, so these games should be click and play on Linux with Steam Play: 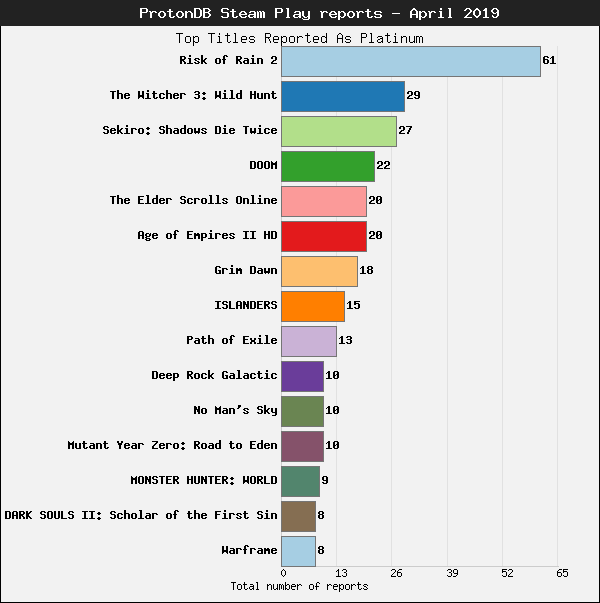 Now a quick look at computer information from the reports for those interesting, starting with the distribution used: 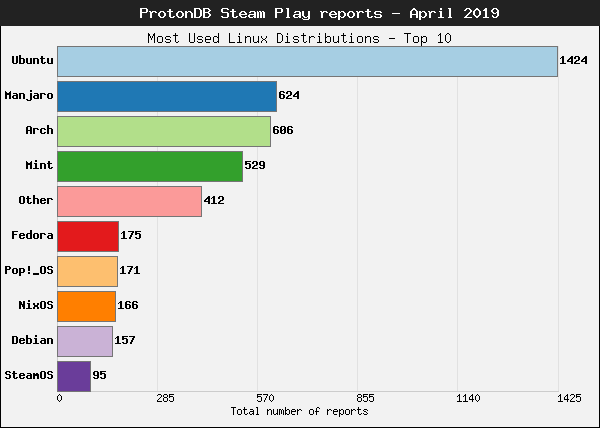 Now a little hardware info for you from the reports, looking over CPU and GPU vendor popularity:

That's all for this month in regards to the reports, will take another look next month with the next data dump from ProtonDB.

How have you been finding Steam Play? Are there specific games you're waiting on working? Were you recently surprised by a game that works? Let's have a chat about it all in the comments.

View PC info
Tested and reported on Protondb:
* Virginia: platinum (Proton 3.7-8, 4.2-1, 4.2-2 and 4.2-3)
* Mirror's Edge: platinum (Proton 4.2-3, some heavy drops in framerate from time to time which is a bit strange looking at system requirements but it's maybe the same on Windows)
* Marie's Room (f2p short "demo"): "platinum" (Proton 4.2-3, work "out of the box" but some problems with my AZERTY keyboard - perhaps not related to Proton - and blackscreen on credits)

I wasn't too much hyped by Proton but I have to say that it works well! :)

View PC info
The rating doesn't tell me if my platform (hw + driver stack) will also provide the same experience.

Is the quality of support significantly different between NVidia and AMD GPUs (Mesa)?
0 Likes

Comandante Ñoñardo 2 May, 2019
View PC info
And, at the same time, Linux has lost 1% of market share in the Steam Hardware Survey of April.
0 Likes

You can type "mesa" or "nvidia" in the filter field on the report page for a specific game to get a quick overview.

Proton itself doesn't care much if you are running on NVIDIA or AMD, and graphics drivers for both are pretty good nowadays. But there can be exceptions, just like some native games have trouble running on open source drivers.
4 Likes, Who?

I really don't think that's reflective of the use of Linux on Steam. I haven't had a hardware survey pop up in over a year now, and I bet I'm not the only one.
1 Likes, Who?

Quoting: vskyeI really don't think that's reflective of the use of Linux on Steam. I haven't had a hardware survey pop up in over a year now, and I bet I'm not the only one.

Hardware survey seems to popup once a year at the anniversary date of the previous one from what I can tell from my limited personal experience (but others seems to tell the same story as I once read somewhere - perhaps on GoL - a way to get the date of the last prompt to confirm this "trend"). :)
0 Likes

View PC info
I wonder about the current status of EAC compatibility with Proton, since they didn't post about it anywhere, is hard to know if it is still being developed or if they dropped it entirely.

If/when they got EAC to work, we will have a whole lot of new reports in Protondb.
0 Likes

Well going from 0.82% to 0.81% is a decline by 1.22%, then we are probably growing as you say since the Survey does not count every single user as well as the total pool is growing so even a 1% decline can be an increase in actual users.
0 Likes
1/4»
While you're here, please consider supporting GamingOnLinux on: