A New BATTLETECH Game From Harebrained Schemes Is On Kickstarter, Funded Already

Harebrained Schemes are doing pretty well for themselves with their RPG games, and now they are going back to BATTLETECH with a new Kickstarter. Support has poured in, and it's funded already. 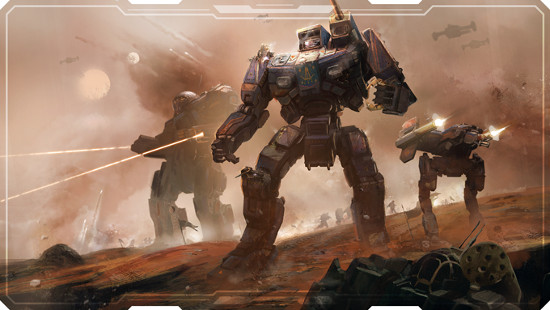 We don't often cover crowdfunding, especially not a single project by itself, but Harebrained Schemes have done great with their Linux support. BATTLETECH has a Linux version offered straight up, with no stretch goal either, so I consider this a pretty safe bet.

BATTLETECH is a single-player, turn-based, tactical 'Mech combat game for PC. (And Mac and Linux!) The game may also include PVP multiplayer if enough funding is reached - more on that below.

The BattleTech Universe is one of near-constant warfare and feudal political intrigue, where great noble houses vie for dominance of a vast region of space known as the Inner Sphere. It's a universe of flawed heroes, fallen empires and grey moral realities. Great families vie for supremacy, with alliances and betrayals constantly shifting the balance of power.

Our BATTLETECH game is set in the popular 3025 Succession Wars Era of the BattleTech Universe - often referred to as "Classic BattleTech".

Will you fund it, or will you wait for the release?

ricki42 30 Sep, 2015
View PC info
Backed this already. Harebrained Schemes have experience with both kickstarter and Linux games, I love what they did with Shadowrun, so they've definitely earned my trust.
This kickstarter is going really well, so it's looking good for the $1,000,000 single-player campaign stretch goal, which, in a way, is the real goal.
4 Likes, Who?

Quoting: ricki42Backed this already. Harebrained Schemes have experience with both kickstarter and Linux games, I love what they did with Shadowrun, so they've definitely earned my trust.
This kickstarter is going really well, so it's looking good for the $1,000,000 single-player campaign stretch goal, which, in a way, is the real goal.

The $1 million stage 2 goal is a shoo-in, they'll likely hit that goal today, possibly within a couple hours.

Like you, I backed this. I haven't backed a kickstarter in a long while as I've gotten burnt out on crowdfunding, but Harebrained Schemes have a proven trackrecord and I've enjoyed all the Shadowrun games they made immensely. Plus, I played BATTLETECH when I was young and really enjoyed the game. I'm looking forward to messing around with the loadouts of various mechs again.
0 Likes
Elfe 30 Sep, 2015
"...for PC. (And Mac and Linux!)"
for PC (Windows, Mac OS, Linux)

The Crescent Hawks' games are some of my all-time favourite videogames and the original MechCommander was amazing as well. I haven't backed many projects recently but I think I may have to back this one.
1 Likes, Who?

Quoting: LiamWe don't often cover crowdfunding, especially not a single project by itself, but Harebrained Schemes have done great with their Linux support. BATTLETECH has a Linux version offered straight up, with no stretch goal either, so I consider this a pretty safe bet.

I agree with this. Harebrained so far has earned pretty good reputation. I'm really glad they're doing other things than just Shadowrun (which is still great in itself). I never saw the appeal of battlemechs and japanese Gundams, but I'm still looking out for their Necropolis game.
0 Likes

View PC info
Glad they seem to have gotten a license agreement, IMHO the original Battletech lore is one of the best developed SciFi settings one can have for such a game. Really looking forward to it, I just wish their release target wouldn't be mid 2017 :(
0 Likes

View PC info
I'm not going to get too excited, based off seeing other Battletech games in recent times try and fail, but I do hope they make something worthwhile. Guess we'll just have to wait and see.
0 Likes

Just like Keyrock, the Kickstarter hype has worn off on me. But once in a while their's a project that I think is worth supporting. This is such a project. While I was never a fan of the Battletech tabletop game, I still like the setting. And with their Shadorun games Harebrained Schemes have proven already that they produce fantastic games for Linux. I didn't need to think twice to back this up.
0 Likes
1/2»
While you're here, please consider supporting GamingOnLinux on: