A new Surviving Mars update is out, with a little tribute to the late Stephen Hawking & source code access

The rather engrossing survival strategy game Surviving Mars has a new update out, with a nice tribute to the late Stephen Hawking. 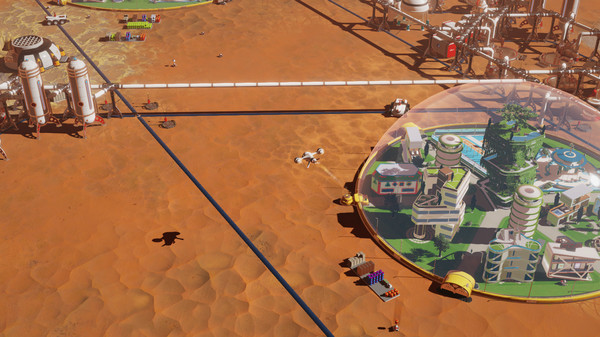 Some of the major changes include: the Science Institute has been renamed the Hawking Institute, you can now adjust the Birth Control Policy for domes, the max zoom-out distance has been increased (woo!) so you might not need to resort to a mod now, the way colonists pick workplaces has been optimized, colonist will no longer take a long walk to their death for work and rover pathfinding has improved as well.

They've also published some of the source code to the game to help modders, for reference purposes. That's a really nice move, kudos to Haemimont Games! However, the actual Mod Editor is not available on Linux and Mac, which is a shame. I briefly spoke to Ivan-Assen Ivanov, the CTO of Haemimont on Twitter who said "if it's requested enough, I'm sure something can be negotiated ;-)". If you want the mod editor, do let them know.

Still, mods can be made with LUA scripting, so the source code release should help some of the more dedicated modders and mods do work fine on Linux, so I sense a healthy mod community brewing.

There's plenty of smaller gameplay and UI changes as well as stability and performance fixes. Do check the full patch notes here. You can grab it now on Humble Store, GOG and Steam. Do I recommend it? Most definitely.

View PC info
Technically it's not the source code of the entire game, just the Lua parts (as described in the README). Still its kinda cheating a good documentation, but better then nothing I guess.

Liam Dawe 5 Apr, 2018
View PC info
Correct, didn't mean to imply it was the entire thing, did a minor adjustment to the text to be clearer.

They do have documentation, but that's in the Mod Editor.
0 Likes

View PC info
Don't know if this has already been mentioned, couldn't find anything in a quick search: In their Q&A video from 2 weeks ago, they were talking about Linux (and Mac) being a top priority for polishing, so this update might already contain some results of that?

Quoting: CorbenDon't know if this has already been mentioned, couldn't find anything in a quick search: In their Q&A video from 2 weeks ago, they were talking about Linux (and Mac) being a top priority for polishing, so this update might already contain some results of that?

I'm still getting graphical corruption with Mesa RadeonSI on my Vega card. between this update and just getting the latest Mesa I was really hoping it would be fixed.
0 Likes

Quotethe Science Institute has been renamed the Hawking Institute...

This shouldn't have caused me to tear up but it did and of course afterward I launched my recent save just to see the name change.
0 Likes
mad_mesa 6 Apr, 2018

Quoting: GuestBe sure to report the bug. Vega owners using RadeonSI and playing Survival Mars aren't exactly numerous, so perhaps this hasn't been reported yet? I don't get any corruption on my Tonga card.

I have, at least with the new in-game bug report tool (ctrl+f1). At the moment the patch seems to have broken more than it fixed as it seems rockets can no longer be launched from the surface once they're refueled.
0 Likes
While you're here, please consider supporting GamingOnLinux on: