The Steam Play tracker ProtonDB just recently put out another set of reports, so here's another look at some interesting findings when going over the data. As a reminder, ProtonDB is not an official Valve site and everything should be taken with a healthy pinch of salt. That said, it's still fun to take a look at the data it provides.

First up, ProtonDB is getting ridiculously big now with over 36,786 reports in total and quite a few were done this month: 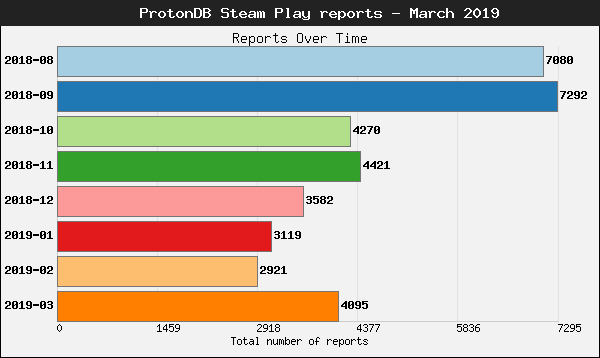 Nice to see a bit of a surge there, likely helped by some big releases last month. Not just the games though, we also had the Steam Play Proton 4.2 beta release during last month causing a bit of hype. I imagine we will see a surge every time there's a few noteworthy releases on Steam.

Let's break it down a bit and see what types of reports Steam Play was getting for March:

While that's all quite interesting, the most important thing to know is what games are being reported? No guessing will be needed to see what games are popular this time around! With Sekiro: Shadows Die Twice and Risk of Rain 2 being newer entries, both getting quite a lot of reports. 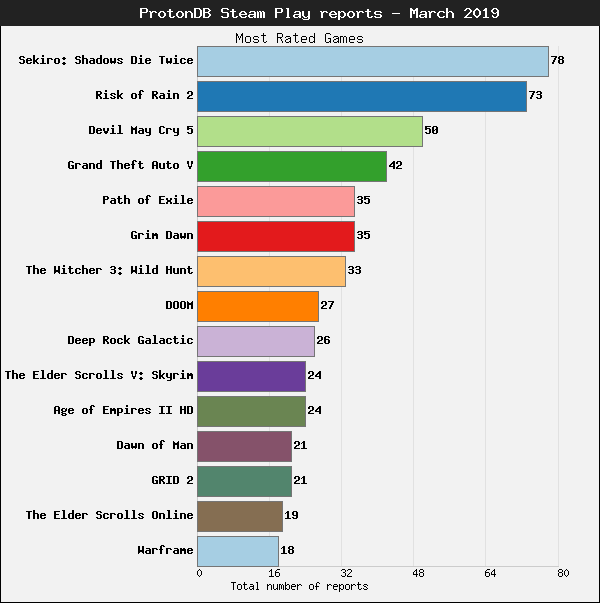 Let's look a bit closer though, for the reports what games were getting the most Platinum ratings last month? These are the games you should expect to be click and play: 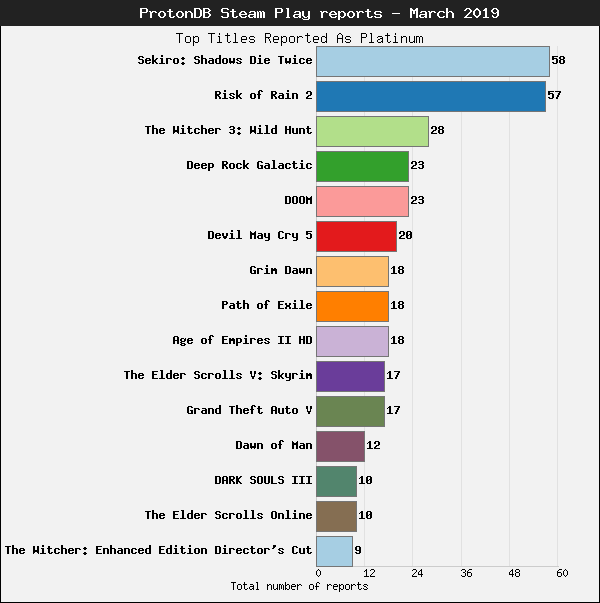 Very surprising to see such a high-profile release such as Sekiro: Shadows Die Twice get so many good reports. This is showing the power of Steam Play and what it can achieve, when we get the ability to play games like that at release with no waiting around. I will actually be taking a personal look at Risk of Rain 2 this week, since it was gifted by a reader (thanks archtoasty!).

For those interested, you can also see a little more info about the computers people are reporting with: 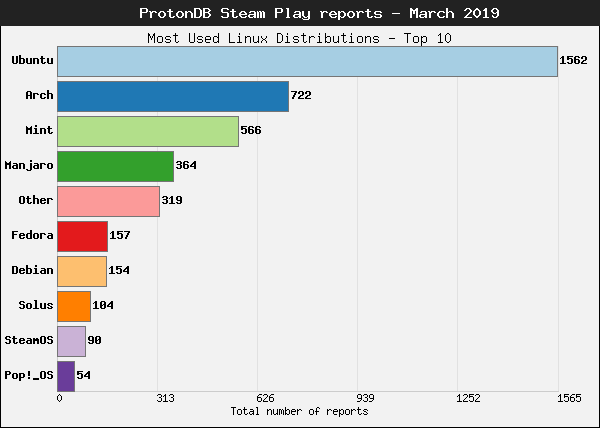 Usual note about "Other": lots of the reports don't include a specific distribution name. Where we're unable to properly identify them when scraping the data dump, we bundle them together. This can be caused by multiple things, so hopefully in future ProtonDB can make this clearer.

As for what version of Proton people have been using, 3.16-8 remains the most popular with 1,558 reports in March although Proton 4.2-1 is already closing in on 500 reports.

For those interested, the raw data can be found on GitHub.

Article taken from GamingOnLinux.com.
Tags: Steam Play
29 Likes, Who?
We do often include affiliate links to earn us some pennies. We are currently affiliated with GOG, Humble Store and Paradox Interactive. See more information here.
About the author - Liam Dawe

I am the owner of GamingOnLinux. After discovering Linux back in the days of Mandrake in 2003, I constantly came back to check on the progress of Linux until Ubuntu appeared on the scene and it helped me to really love it. You can reach me easily by emailing GamingOnLinux directly.
See more from me
33 comments
Page: 1/4»

View PC info
Thank you very much for shining light on our community!

Proton has been and continues to be a blessing to the average Linux gamer, and ProtonDB is an essential and useful tool to know where the project needs improvements, and what games you can expect to run yourself.

And just a shoutout to the SPCR (SteamPlay Compatibility Report), which recently renamed to [ProtonDB for Steam](https://addons.mozilla.org/en-CA/firefox/addon/protondb-for-steam/) (with authorization from ProtonDB's owner) which allows you to see the average report for the game's steam page you're on!

I do not use arch BTW.

View PC info
I didn't know Sekiro runs so well out of the box! To the wishlist straightaway

View PC info
Is there some option for filter versions in the site? Like I want to see feedback from the latest version with just mesa drivers, but didn't found any option for that.
1 Likes, Who?

BielFPsIs there some option for filter versions in the site? Like I want to see feedback from the latest version with just mesa drivers, but didn't found any option for that.

I asked for exactly that on the Discord, but no sign of that enhancement just yet. Hopefully something that comes soon, because so much of ProtonDB is muddy already, since earlier Proton version reports drag down the score of certain games that work perfectly now.

I mean, Subnautica is still Silver on the site, but is at least a gold. And with a simple "-forcegl", it's a Platinum (yeah, yeah, I know what "Platinum" means, but you get my point... it's a trivial fix).

So I'd really like to say "Only show me Proton 4.2 reports, and only for Nvidia". And if I can get a "Only Ubuntu", so much the better.

View PC info
I'll take this with a bit of salt, for some reasons people keep giving platinum and gold ratings even when workarounds are required or performance is not equivalent to running under windows. Platinum means "Runs perfectly out of the box" and Gold means "Runs perfectly after tweaks"...
6 Likes, Who?


Totally agree, I hope they can fix it soon.

scaineI mean, Subnautica is still Silver on the site, but is at least a gold. And with a simple "-forcegl", it's a Platinum


This one I think it should be gold if require a tweak, even if it's a small one. Imagine that most people don't even know this command without search in the internet first. Platinum should be only for games working by just launching it, and gold if just require a little tweak like your example.

scaineSo I'd really like to say "Only show me Proton 4.2 reports, and only for Nvidia". And if I can get a "Only Ubuntu", so much the better.

The vast majority of reports there are from Nvidia users. It's understandable since until not long ago, Amd was crap with linux, but at the same time it's sad to see most people using products for a company that doesn't care about helping open source.
3 Likes, Who?

View PC info
So far I'm starting to pile up No-DVD/No-Uplay cracks because a good number of my games run fine once you get rid of the second layer of DRM after Steam. I had Batman Arkham Asylum working until I updated to 4.2 and 418.56 and suddenly it doesn't work.

scaineSo I'd really like to say "Only show me Proton 4.2 reports, and only for Nvidia". And if I can get a "Only Ubuntu", so much the better.

The vast majority of reports there are from Nvidia users. It's understandable since until not long ago, Amd was crap with linux, but at the same time it's sad to see most people using products for a company that doesn't care about helping open source.

Know the feeling. I am on my third NVIDIA card straight. I WANTED an RX580, and the week my 660GtX died was the one they all disappeared thanks to the crypto-miners. So I have my 1060GTX, but dammit I WANT to go AMD.