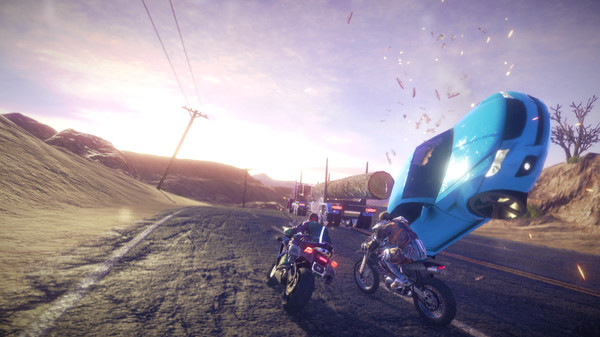 The changelog for it is quite small:

Annoyingly, they messed up the executable naming for the Linux & Mac versions. You can launch it directly from the installed folder, but not from Steam directly until they fix this. Sadly, that means the Steam Controller doesn't work as a gamepad, even when using SC Controller the buttons were all messed up so it's keyboard only until they fix it up.

We've let them know and there's posts about it on Steam, so hopefully such a simple issue will be fixed shortly. Even so, it's frustrating as clearly it wasn't tested even once. Update: They fixed it, works fine now.

You can grab it from Humble Store and Steam (50% off).

Article taken from GamingOnLinux.com.
Tags: Action, Humble Store, Racing, Steam
6 Likes, Who?
We do often include affiliate links to earn us some pennies. We are currently affiliated with GOG, Humble Store and Paradox Interactive. See more here.
About the author - Liam Dawe

View PC info
Can you work around the launch issue by adding a symlink to the game folder or setting the proper executable path as the launch command?
0 Likes

Quoting: GuestI've been tempted several times to buy this, but it isnt the first time they've released it broken without any apparent testing at all. So personally I will miss out on a perhaps decent game, but I feel it's important to not promote such terrible behavior from devs.

Maybe there should be a section on the Wiki for this, as they are not alone in releasing broken games.

IMHO you are not missing out on a decent game. I did try it with a friend and we both agreed:
- steering is a pain: if you bump into something it takes forever to get back on track. You're faster back on track if you fall of the building!
- Weapons have almost no effect on the race outcome. Your main focus hast to be the obstacles.
0 Likes

View PC info
Hopefully they fix Linux version soon because I want to try out that new physics, old one was really bad. And pick-ups? TBH I wish there was an option to disable them entirely.
0 Likes

Quoting: gabber[...] if you bump into something it takes forever to get back on track. You're faster back on track if you fall of the building!

There's a button to reset you back on the road.
0 Likes
Purple Library Guy 12 Jul, 2018
It just struck me that "redemption" is one of those weird words, like "disgruntled". Like, people often get "redemption" but you never hear about them getting "demption" in the first place. Or de-demption.

I, myself, am feeling quite gruntled this morning by the way.
1 Likes, Who?

View PC info
When this was first announced, I was hoping for a beautified 21st century version of Road Rash 64. But something about the final product felt so off. It almost feels like the game itself runs way too fast.
0 Likes

View PC info
Still waiting for GOG or any other DRM-free store release.

No. Road Redemption will release DRM-FREE on Mac, Windows, and Linux.

We believe the best way to combat piracy is by giving Road Redemption purchasers free content updates, as a reward for their support.

We believe that always-on DRM has made a lot of great games a lot worse, for those who bought them legally.

While we definitely plan on making Road Redemption for purchase on Steam, all content updates will be provided DRM-free to non-Steam users as well.

Quoting: GuestWhile the Steam version is the only version available, it IS actually DRM-free and can run without the steam client just fine (last time I checked, anyway)

Then they should have no problems releasing it in other stores.
0 Likes

Quoting: GuestWhich is what the Steam version does, just as DRM-free as any other drm-free game

Quoting: Guest"So I expect you're wondering what happened to the DRM-free version. Simply, the Steam version is the DRM-free version. As a small studio it's so much easier to have one point of distribution for each platform and for PC there's only one sensible choice, Steam. So it's only distributed through Steam but the version you're getting is 100% DRM-free nonetheless."


That's not a satisfactory answer, and a pity that developers took that route to handle their DRM-free promise where they explicitly mentioned non Steam users (see quote above). As I said, many DRM-free users view Steam itself as DRM and therefore saying that "the game is DRM-free on Steam" isn't the way to address it.

I can understand that they don't want to deal with many distributors because it's time consuming, but I don't agree that "Steam is the only sensible choice for PC". This kind of approach is quite unhealthy.