Take a look at some shots: 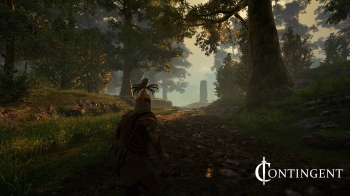 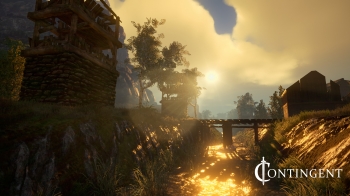 When asking about Linux support, the developer said this:

We plan to support Contingent on both Linux and Mac OS. The more people that can play, the better! (plus I'm a big fan of Linux)

Always nice to find another Linux fan amongst all the developers we speak to.

What's interesting, is that it will be mixing in traditional action-RPG mechanics with larger strategy elements too, with you being able to order troops around and lay siege to enemy settlements and villages. They say it will have the "tried and tested" combat system, with advanced combat techniques and a dynamic wounds system.

Follow along on Steam, their official site is just a placeholder. When their Kickstarter is live, we will let you know.

Article taken from GamingOnLinux.com.
Tags: Action, RPG, Upcoming
34 Likes, Who?
We do often include affiliate links to earn us some pennies. We are currently affiliated with GOG and Humble Store. See more here.
About the author - Liam Dawe

View PC info
Sounds interesting and a type of game Linux needs more of. Will keep an eye for the Kickstarter.
1 Likes, Who?

View PC info
Could be interesting. I'll wait for the confirmation of DRM-free release plans. Multiplayer though could cause a problem for it.

STiAT 26 Aug, 2018
View PC info
Sounds like a game I'd like. Will keep an eye on it, linux support + kickstarter even with official announcement - was burnt too often to pledge, but I hope the developer will be able to bring us a port. If it happens, it's a buy.

It's sadly reality that a lot of devs decide to bring out just a windows version in the end. If I was a windows user I'd take the risk of the pledge, as kickstarter evolved for linux users - I don't.
2 Likes, Who?
shawnsterp 26 Aug, 2018
hard to tell much from the video and pictures on steam, but it looks like a third person game. Looks nice, from the little that is there.
1 Likes, Who?
x_wing 27 Aug, 2018

View PC info
For me sounds like Mount & Blade on the Roman empire. Graphically speaking looks promising, but in the preview it's not quite clear if there will be a story behind. I hope so, as with the nice environment the devs has created and a good history it will be a very enjoyable experience (and probably a must have :P).

View PC info
I wonder what engine this is? The lighting from the torches in the video (on the Steam page) were remarkably bad, looking like small SUNS in all their insane intensity, yet barely casting any light on the surroundings at all...
Maybe it's a programming tweak?

Mountain Man 27 Aug, 2018
View PC info
I'm always suspicious of games that try to mix different play styles -- in this case action RPG and strategy -- because very few do it well.
1 Likes, Who?

View PC info
Added the game to my Wishlist. Looks like my sort of thing. Interested to see game play and reviews when the game is ready. Looking at the pre-alpha video, I'm guessing this is at least 6 months away from release.
0 Likes
1/2»
While you're here, please consider supporting GamingOnLinux on: