Airmen is an online shooter where you build your own airship with friends, we have keys to give away

What's that, more Steam keys to give away? You got that right. This time it's a little different, as the steampunk airship first-person shooter Airmen [Steam] has a hidden Linux version on Steam.

Airmen is a first person shooter where players build and battle their own custom airships. Start with an empty hangar and build a steampunk airship piece by piece. Crew you airship alongside friends on dangerous expeditions into the archipelago. Fill your cargo hold with wood, aetherium, magnesite and more to upgrade your ship. Mine resources or raid the cargo holds of other players or AI air forts. Take the wheel, mount the turrets, grab an axe for boarding action, or try to stay airborne using a repair hammer but beware: every component of your airship can be destroyed so be sure to extract in one piece. 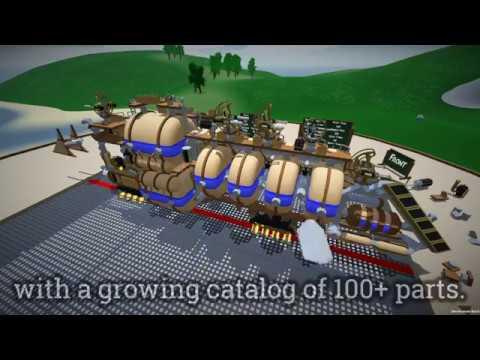 We have four Steam keys to give away, so you can help test the Linux version. If you're interested, let yourselves known in the comments. We will aim to give out the keys around 8PM BST on Sunday.

If you want to try it anyway, find it on Steam.

Article taken from GamingOnLinux.com.
Tags: Action, Indie Game, Steam, Strategy, Unity
8 Likes, Who?
We do often include affiliate links to earn us some pennies. We are currently affiliated with GOG, Humble Store and Paradox Interactive. See more here.
About the author - Liam Dawe

View PC info
Sounds interesting! Would love to test this Game on my SteamOS and Archlinux.
0 Likes

View PC info
Steampunk? Count me in. There are not enough steampunk games.
1 Likes, Who?

Hello, I'd like to try the game if you have keys left.
0 Likes

View PC info
I love almost anything with airships in it. This has full building, so count me interested!
0 Likes

View PC info
nice! I would love to try out the linux client.

View PC info
It looks like Guns of Icarus with better gameplay and more fun, but worse graphics ;) I would love to try it!
0 Likes

I'm in!
0 Likes
1/3»
While you're here, please consider supporting GamingOnLinux on: