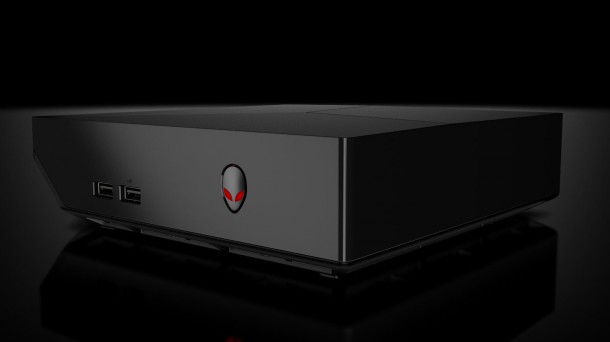 Alienware have fully announced their Steam Machine at E3 and drum roll....it doesn't include SteamOS, but has a custom UI on top of Windows 8.1 and bundled with a 360 game-pad. So, with SteamOS not out yet and Steam Controllers being delayed how many more will "do an Alienware" and simply re-brand them into Windows Steam Machines?

Something I have said before is that if it doesn't have SteamOS or a Steam Controller then how is it a Steam Machine? It isn't. The entire point of Steam Machines are to have Valve's software on it.

Something I have been thinking about a lot is that it seems a lot of people (me included) are betting on Steam Machines with SteamOS being a success, but what happens if they fail?

SteamOS & Steam Machines aren't going to sell well compared to the big consoles that's for sure. We even have Alienware stating they feel it will be their lowest earner, which is a fair point as they cannot put a big mark-up on it as they have to compete with other providers.
I imagine the other Steam Machine providers feel the same way that it will only be a small earner for them, I wouldn't be surprised if there is low productions runs to begin with from all companies.

A bit of a shame as Valve have already done a lot of good for us even if the machines are a flop, we have seen driver improvements from all sides giving us better performance. We have bigger game companies porting to Linux like the Metro series, The Witcher 2, the new Civilization game, XCOM and plenty more on the way.

Steam Machines may soon become the Android of the PC space, with multiple different providers fighting against each other all with wildly varying configurations that game developers have to test against, although that's not new for the PC space. The controller should have been one solid thing game developers can build against since they will all be the same, but with Alienware just bundling a 360 game-pad it's not looking good there either.

Realistically SteamOS and Steam Machines were never going to be an overnight success anyway, but more of a gradual build-up and I just hope journalists out there don't do what they usually do and put a negative spin on it if it doesn't sell like hot cakes right away.

What if Steam Machines don't sell well at all? I imagine all the vendors are projecting low margins, but what if they are vastly lower than their own predictions? We will then see the big media websites telling everyone how poorly they are selling and developers may re-consider their stances on porting to Linux. I would hope that's not the case, but we have to be realistic about this. Especially now we have one of the bigger companies (Alienware) sidestepping both SteamOS and the Steam Controller to make...a normal PC with a custom UI *sigh*.

Mac gaming seems to be doing okay with support from big developers and publishers without dedicated Mac gaming machines, so considering Linux is free and can be installed on any PC I personally think we will be okay. We just have to keep up the momentum of new games that we have right now.

The good thing is we still have GOG.com to support us yet with their DRM free goodness and their new GOG Galaxy client, as there are plenty of people who don't particularly like Steam and GOG.com has a massive customer-base. We also still have the Humble Indie Bundles and the Humble PC & Android bundles which fill us up with a truck load of games on every release. So, even if things with Steam Machines don't go as well as lot of people hope I think we will be okay.

No matter what happens though, you can be sure we will still always report on Linux gaming, we always have even when the big gaming websites ignored it (most still do).

What are your thoughts on the future of Steam Machines?

UPDATE: It seems they will still be going to SteamOS in future, but still I can't help but think they should have just waited.

AlienwareSteamOS is obviously been designed around one single use, whereas Windows is a multi-use operating system that can be custom tailored around any one particular use—as we're doing [with Alienware Alpha's console mode], but Valve has a lot more control developing SteamOS, ensuring it's singularly focused with one use model. That's why it's a very important initiative for us, and one we're still fully supporting as soon as it's ready. It's a more sustainable way of delivering a reliable living room experience. We can build our custom [console UI] interface over Windows, but we don't know what Windows 9's going to be. Are we going to have to redo all that work in Windows 9?

That's why we feel that over the long term, SteamOS and the Steam gamepad are going to be the best solution.

It's interesting to see them question if they will have to re-do their work for the next version of Windows, as if they waited for SteamOS to be a true Steam Machine then they wouldn't have had to spend money on R&D for this custom UI slapped onto Windows 8.1.

Source Article taken from GamingOnLinux.com.
Tags: Hardware, Steam
0 Likes
We do often include affiliate links to earn us some pennies. We are currently affiliated with GOG, Humble Store and Paradox Interactive. See more here.
About the author - Liam Dawe

View PC info
I'm thinking perhaps this is a consequence of the delay of the controller and launch of the OS, could it be that Alienware had long planned this unveil and now rather frenetically changed this bundle to be able to deliver it on the market as planned?

How it can be so long to make a "mantle"(not taking about the API) for Debian that work ?
They already got the Steam client ready, and the interface "big picture", and there new graphic manager already support Intel, nVidia and AMD chip(and it's great). So, why it take them so long to release SteamOS ?
Are working on something else ?
It is because of the controller ?

I'm quite disapointed having to wait more than half a year.
1 Likes, Who?
Sslaxx 10 June 2014 at 8:30 am UTC
View PC info
At this stage, I'm beginning to wonder if we'll ever see any actual Steam Machine, or even the controller. Valve's weaknesses as a software developer ("Valve Time", anyone?) really don't help hardware development.
0 Likes
zim 10 June 2014 at 8:30 am UTC
I would imagine that Alienware would have to stop calling them "steam machines" or "steam boxes" and would have to get rid of the Valve steam logo. There is no way Valve would let Alienware still market their system as a steam box, and the steam boxes haven't been released yet so Valve may talk them back into supporting the Steam OS (Linux) platform.

I still think valve should have either handled manufacturing the steam boxes themselves or at least try for a partnership with one manufacturer to make steam machines to Valve's specifications. After all, consoles are all about being a one size fits all kind of deal.
1 Likes, Who?
jdub 10 June 2014 at 8:31 am UTC
If they rush it and release early, history shows it will be disastrous....Valve knows exactly what they are doing
0 Likes
entropy 10 June 2014 at 8:33 am UTC
IMHO this is a huge setback for (us) Linux enthusiasts.

If SteamOS isn't ready yet - mostly because of the lacking games (in contrast, the controller is a symmetric issue) - why didn't they just wait?

How about this theory: Those manufacturers don't feel comfortable with SteamOS and use this kind of head start with Windows-based systems to take focus away from a Linux-based system which they probably see as more problematic in terms of user experience and support.

View PC info
The weird thing is that Valve only really dedicated themselves to SteamOS because of shenanigans Microsoft was trying to pull...and here's a "Steam Machine" running Windows 8.1.

I think that even if SteamOS doesn't pan out, it's already had a serious impact on the industry: a lot of developers have started to realise how easy cross-platform is, and just what they can do with (latest) OpenGL. It was going to happen eventually anyway (thanks to iOS and Android), but Valve made it happen much sooner. So it's already a victory for Linux as a gaming platform.
3 Likes, Who?

View PC info
Yeah, I guess that they wouldn't report them to 2015 because of the delay for the OS & controller. And it's probable that other manufacturers will do the same. It's not a big surprise, they have to sell their hardware.

But there's a question nagging me: wasn't the point of the Valve partnership to have machines sold with SteamOS and the Steam pad? What about this "official Valve seal" if they change the specs? Is there a list of Steam Machines partners somewhere on Valve's website and is Alienware still listed there if so?
0 Likes
BillNyeTheBlackGuy 10 June 2014 at 8:49 am UTC
I saw this coming when Valve pushed back the release date for the OS and controller.

But I'm not worry; Valve always takes things slow and builds things up overtime. That's how steam became popular in the first place.
2 Likes, Who?
Cestarian 10 June 2014 at 8:55 am UTC
Valve are falling behind dramatically, this isn't very good.

One of the really good things about Steam Machines (to begin with) is that they would be cheaper as you don't have to pay premium for having Windows installed, this negates that bonus. They should have just shipped it with ubuntu or something instead (or better yet, allow the buyer to choose)
0 Likes
1/5»