All Walls Must Fall, the quirky tech-noir tactics game, comes out of Early Access

This isometric tactical RPG blends in sci-fi, a Cold War that never ended and lots of spirited action. It’s powered by Unreal Engine 4 and has good Linux support. 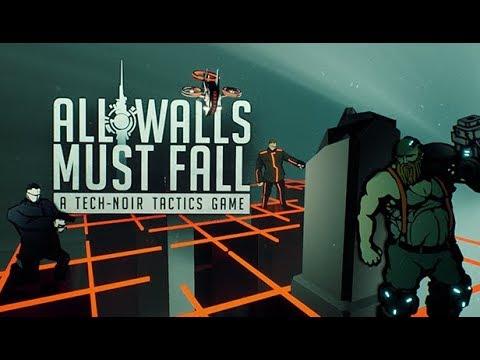 All Walls Must Fall [Official Site] is one of those games that’s difficult to describe concisely. It mashes cyberpunk aesthetics with isometric strategy while including RPG elements and inspirations from modern games. As you can see from the trailer it’s, above all, a game that can easily keep up a frantic pace.

The game has seen a lot of updates during its Early Access period in the last few months and the proper launch brings with it quite a bit in the polish department. You can see the full patch notes for yourself, but some of the highlights include: a reworked and cleaner HUD, different themed nightclubs and plenty of new graphical additions that add to the overall atmosphere. These all sound like suitable additions to the game's already plentiful charming style and simple interface.

The developer doesn’t seem to be done with this title yet, despite launching out of Early Access. There’s still some rewards from their crowdfunding campaign they have to get around to and a few quality of life and bug fixes that they’ve said that they’ll be doing in the next month.

Manipulating time in nightclubs in a futuristic Cold War Germany isn’t really something that I had ever thought of wanting to do before, but I think I’m sold on the premise given the attention to detail in both graphics and sountrack.

Liam has shared bits and pieces of his thoughts various times in the past and seemed to have a good time with the game. It wouldn’t surprise me if he revisited the game in the near future and shared more complete thoughts on the experience.

For now, however, you can grab All Walls Must Fall on Steam or itch, where it’s currently discounted by 30%.

View PC info
I've been looking forward to that one :)
0 Likes

Quoting: liamdaweWe're quoted in the trailer too :D

And that's a good way for Linux gaming to gain more (good) visibility!

View PC info
Been playing it a bit and - so far - it's been fun!
This approach to turn based combat is really refreshing: Your resources are running out as you think about your next move, so you better don't take ages to think. Add to that the abilities (especially turning back time with/without moving yourself) and it is really quite unique.
Had to repeat some missions already because my initial approach failed.

I can imagine the art style going on my nerves at some point, but I've yet to reach that point and hope the game won't overstay its welcome eventually.

Also: not only is it set in nightclubs, it is (almost? not sure yet) exclusively in gay nightclubs (including guys dancing naked) - hence you will probably not find a single woman in the entire game - and can flirt with pretty much every talkative NPC to make them let you pass or even join you for the mission.
Homophobes should probably give this a wide berth, which in itself is a bonus to me.

View PC info
So, here's a review I wrote on Steam:

Quotetl;dr: A short, but fun and very unique turn-based RPG set in nightclubs in a dystopian Berlin.


This really is a very curious little gem of a game.
The combat system is one of a kind - I must say that I have never seen a system quite like it. In contrast to other turn-based games, this one actually puts some pressure on you so that you will not be able to take forever to plan your turn.

Mostly, this is due to the time travelling implemented well in both story and combat system.
You can turn back time (in three different ways that I won't spoil) to undo mistakes, "teleport", lure enemies away, etc.
Which costs resources that you get by getting successfully through a dialogue, combat or by doing mission objectives.

The graphics are highly stylized, but very coherent and atmospheric.
Same for the audio.

The story will invite you to at least a second playthrough, since the results change depending on if you went through the game with or without killing people.
I have played through the game once now - and will likely attempt a second, pacifist playthrough some time later.

As always, a big plus for the linux support.


There are some obvious downsides to the game, though:

First of all, it is short. Really short. One playthrough can be done easily in under five hours, thus even two playthroughs won't even take you 10 hours. This way, the game ensures staying fresh all the way throughout the experience, but that doesn't change the fact that for a turn-based combat game, that just isn't enough.
Another campaign was planned, but not implemented due to not meeting a Kickstarter stretch goal. Too bad, because it would have been kinda necessary.

The second downside is that in the later stages of the game, the balancing falls apart. Your abilities are so strong (and cheap) that you will have a hard time ever running out of them while taking care of whole hordes of enemies. It looks amazing - especially the fast replay after a combat, but too easy is never good.

There is also not a single woman in the game (other than one mentioned). Yes, it is set in gay nightclubs, but still. I just found that a bit weird.

In the end, this is a game very worth experiencing, but be aware that you will be left with the feeling that there should have been more.