Among The Sleep Still Unplayable For A Lot Of Linux Users

Among The Sleep is a great looking game that sadly on Linux doesn't quite work right with many people unable to play, and no sign of a fix yet over a month later.

It's a real shame as the demo worked perfectly, but it seems like enough testing wasn't done on Linux as it's not exactly a small flaw. Users have offered up help in playing with debug builds, but the developers didn't bite sadly. You can see one of the posts asking for support on their Steam forum post here.

I don't think this is a problem with Unity allowing such easy publishing onto Linux. This seems more like a problem with enough testing just not being done again on our platform. Although it's not Linux only, as some Mac users have also reported the exact same issue. It is mostly an Nvidia issue with only two others stating it happens on Intel graphics. 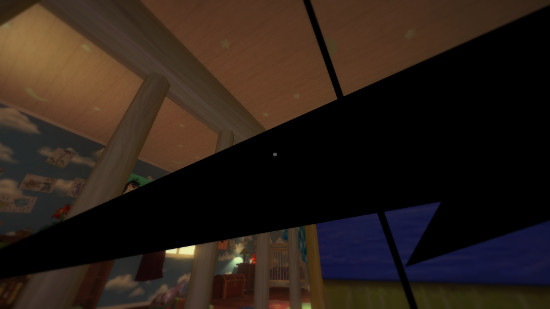 The massive black lines aren't part of the game.

We contacted the developers and it's not good news:

@gamingonlinux We have unfortunately been unable to find a fix yet, but it is one of our top priorities on the list of things to fix.

About
Among the Sleep is a first person horror adventure, in which you play a two year old child. After waking up in the middle of the night to mysterious sounds, you start exploring the dark looking for comfort.

We will keep you posted if they do find a fix, as we are quite excited to be able to play it.

Article taken from GamingOnLinux.com.
Tags: Editorial
0 Likes
We do often include affiliate links to earn us some pennies. We are currently affiliated with GOG and Humble Store. See more here.
About the author - Liam Dawe

PlayX 10 Jul, 2014
View PC info
yes this bugs are real bad and gamebreaking.
There is a workaround for the headless baby but a patch would be better.
1 Likes, Who?

View PC info
There's no need to dance around the issue. The game is completely broken for over a month for many Linux gamers who fronted the cash for it.
2 Likes, Who?

View PC info
I will requote the developer for you


QuoteWe have unfortunately been unable to find a fix yet, but it is one of our top priorities on the list of things to fix.

Where is the hope right now exactly?

Don't blindly stick up for people, this is why Linux users keep getting stung is by over-looking issues just to have a game say it's on Linux.

View PC info
In what way does

When debugging software, it can be very difficult and time-consuming to even reproduce a problem, no matter how many other people are experiencing it. The devs say it's one of their top priorities to fix - let's give them a chance to fix it, instead of posting articles with inaccurate, inflammatory titles.

[edit] Thank you for fixing the title.
3 Likes, Who?

Until there is actual hope there isn't any. They after over a month still haven't got an inkling as to where the bug is.

I've edited the title anyway since people have such a problem with it, and to better get my actual point across.
1 Likes, Who?

killx_den 10 Jul, 2014
View PC info
1 month is like nothing. We had a bug on a pretty big platform which has a complex infrastructure. Dell and Vmware, both couldn't help us with their support. After 5 month we were able to track it down to a service that had a wrong variable in its configuration file.
What I am trying to say is, if the structure (in this case code on another platform) is complex enough, one month time can be like nothing. But maybe they will find the fix tomorrow or next month. Doesn't matter to me as long as they work on it. And as long as they work on it there is hope for a fix.
1 Likes, Who?

View PC info
The situation is quite similar to Slender Man's Shadow. They sell the game that actually doesn't work. I hate that kind of disrespect to the customers. Devs of Among The Sleep, XCOM, Slender Man's Shadow have already shown not good examples. How long this list will be?
0 Likes

Quoting: AstroThe situation is quite similar to Slender Man's Shadow. They sell the game that actually doesn't work. I hate that kind of disrespect to the customers. Devs of Among The Sleep, XCOM, Slender Man's Shadow have already shown not good examples. How long this list will be?

In what way did Feral show a bad example? Their XCOM port is flawless as far as I'm aware. Sure, it may be slower than Windows, but that's irrelevant. It's mighty playable, with no showstopper in sight. O_o
0 Likes

Quoting: AstroDevs of Among The Sleep, XCOM, Slender Man's Shadow have already shown not good examples.

How XCOM is not a good example ? (I am experiencing random crashes which makes it very difficult to play, but it seems to be a nice port anyway)

EDIT: You posted 3 seconds before me :)
32 bits? Yeah... You know our arguments...
0 Likes
1/2»
While you're here, please consider supporting GamingOnLinux on: