Today, Another World (published as "Out of this World" in North America) has finally been released for Linux. This has been an exciting journey for myself in that I got to play a very small role in helping the port eventuate (I won't linger on that. Anybody interested in more details can find details in the footnotes of my longer article). 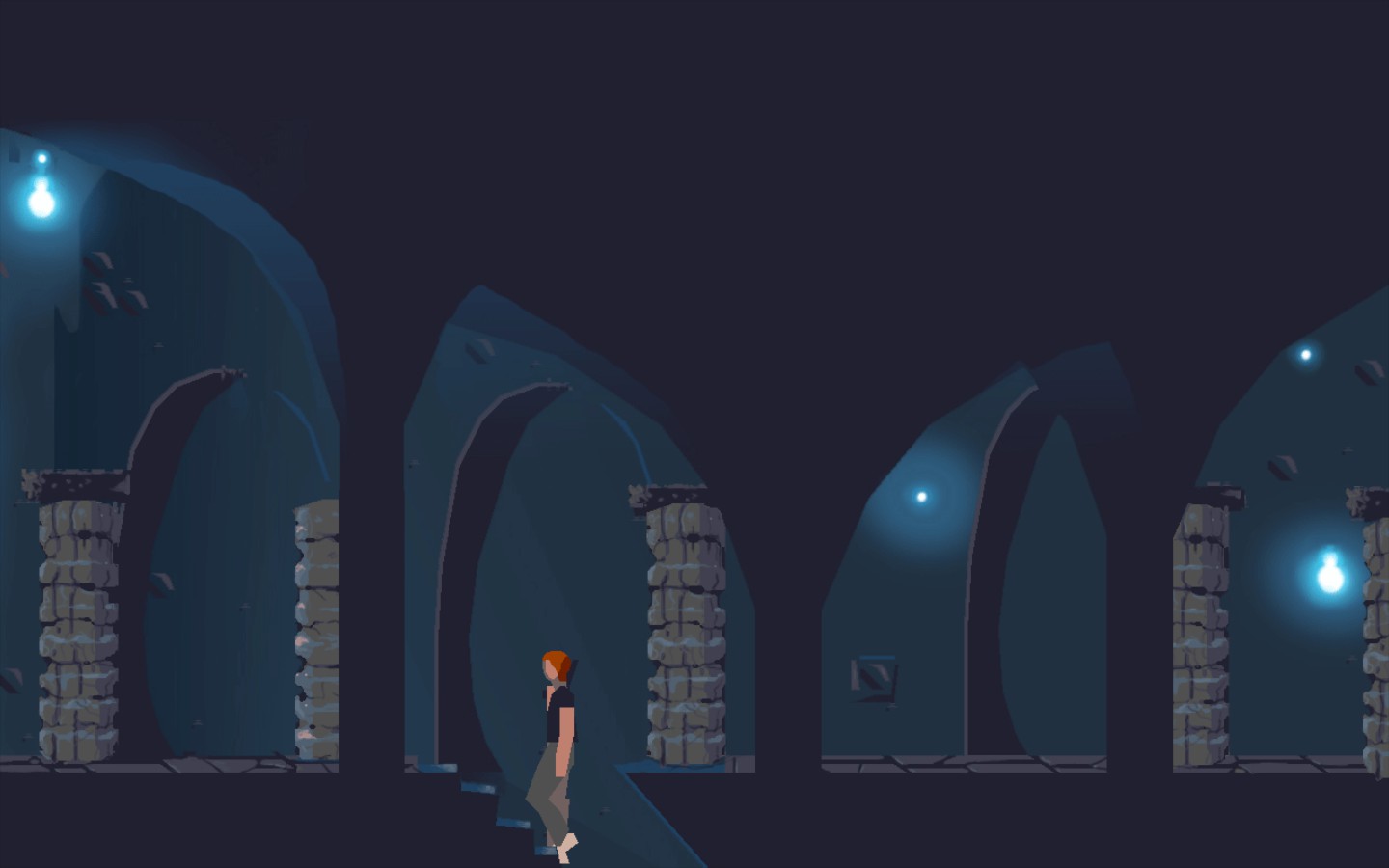 Another World is an atmospheric sci-fi survival platformer which helped define the "cinematic platformer" subgenre. When it was originally released in 1991, its distinctive vector styles, rotoscoped animations, and approach to storytelling were cutting edge.

Now, 23 years later, Linux users have the opportunity to enjoy the 20th Anniversary Edition natively on Linux for the first time thanks to Linux porter Ryan C. Gordon (three cheers!). This enhanced version of the game features repainted high resolution backgrounds, new difficulty modes, remastered sound and music, as well as the option to play the game with upscaled 320x200 visuals and original audio.

Also included are a copy of the remastered soundtrack, PDFs of design and technical notes, a piece of artwork, an 18 minute "Making of" documentary, and Amiga disk images containing the original release with copy protection functionality disabled (which you can run in UAE - that'll be in your distro's repos). 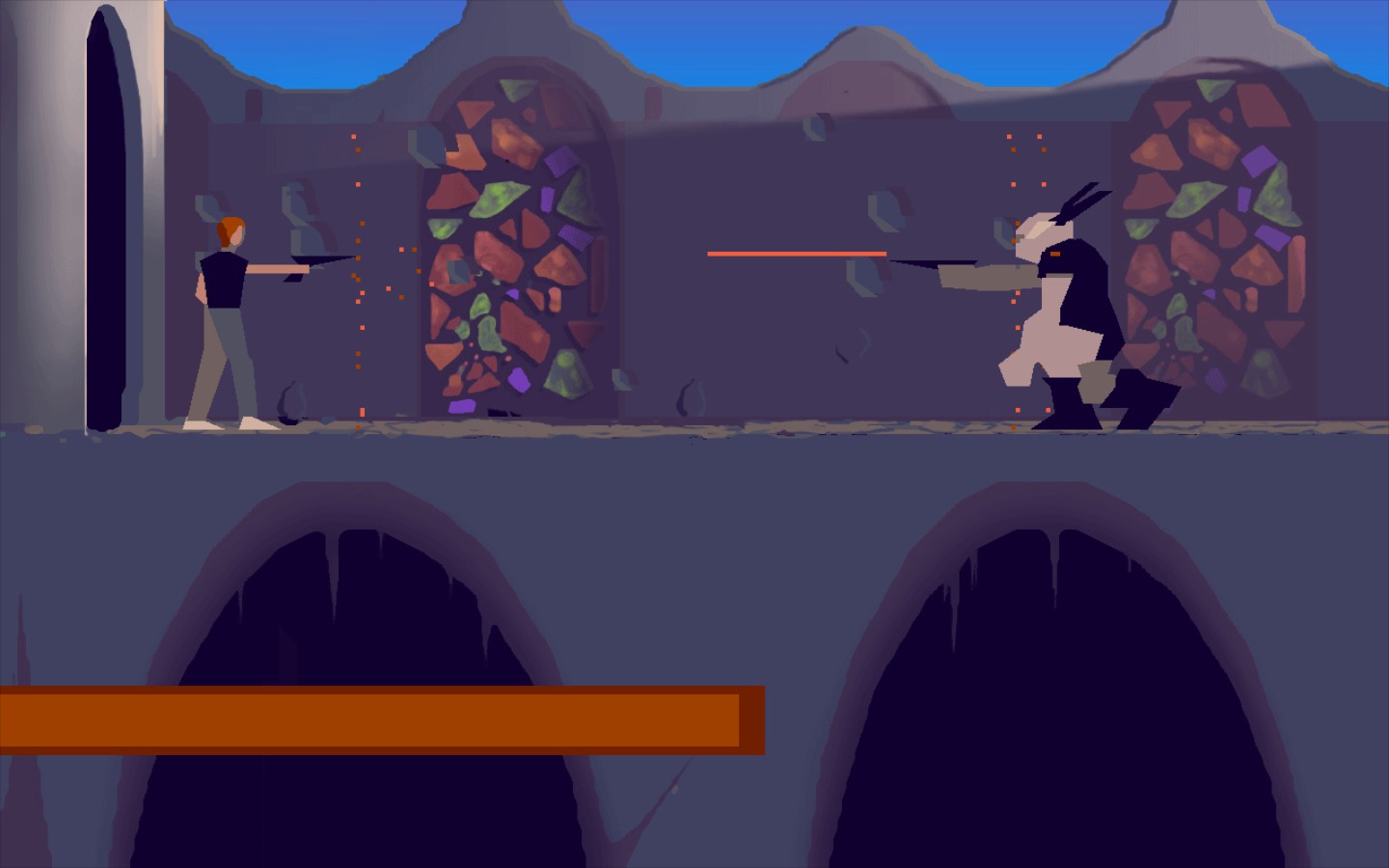 For anybody new to the game, understand that it does not adhere to some modern game design sensibilities. It's punishing, and you will die a lot.

In modern context, this death oriented learning would be considered a negative aspect. At the time of release, the popularity of titles like Dragon's Lair (expect a Linux port of this at some point as well) and Sierra's line of adventure games, which heavily featured player death, made this much more accessible. Deaths with cutscenes in Another World are short and in line with the survival horror aesthetic, showing a glimpse of tightly framed jaws or claws in a way that implies the violent outcome without directly depicting it. Several types of deaths don't feature cutscenes and tend to be more graphic and bloody, though the zoomed out perspective gives them lesser impact.

Unlike Dragon's Lair however, each death in Another World (with the exception of combat encounters and platforming obstacles) provides a learning opportunity, and as such, technically isn't an end-state. This perspective feels to be an important aspect of finding Another World enjoyable and rewarding. 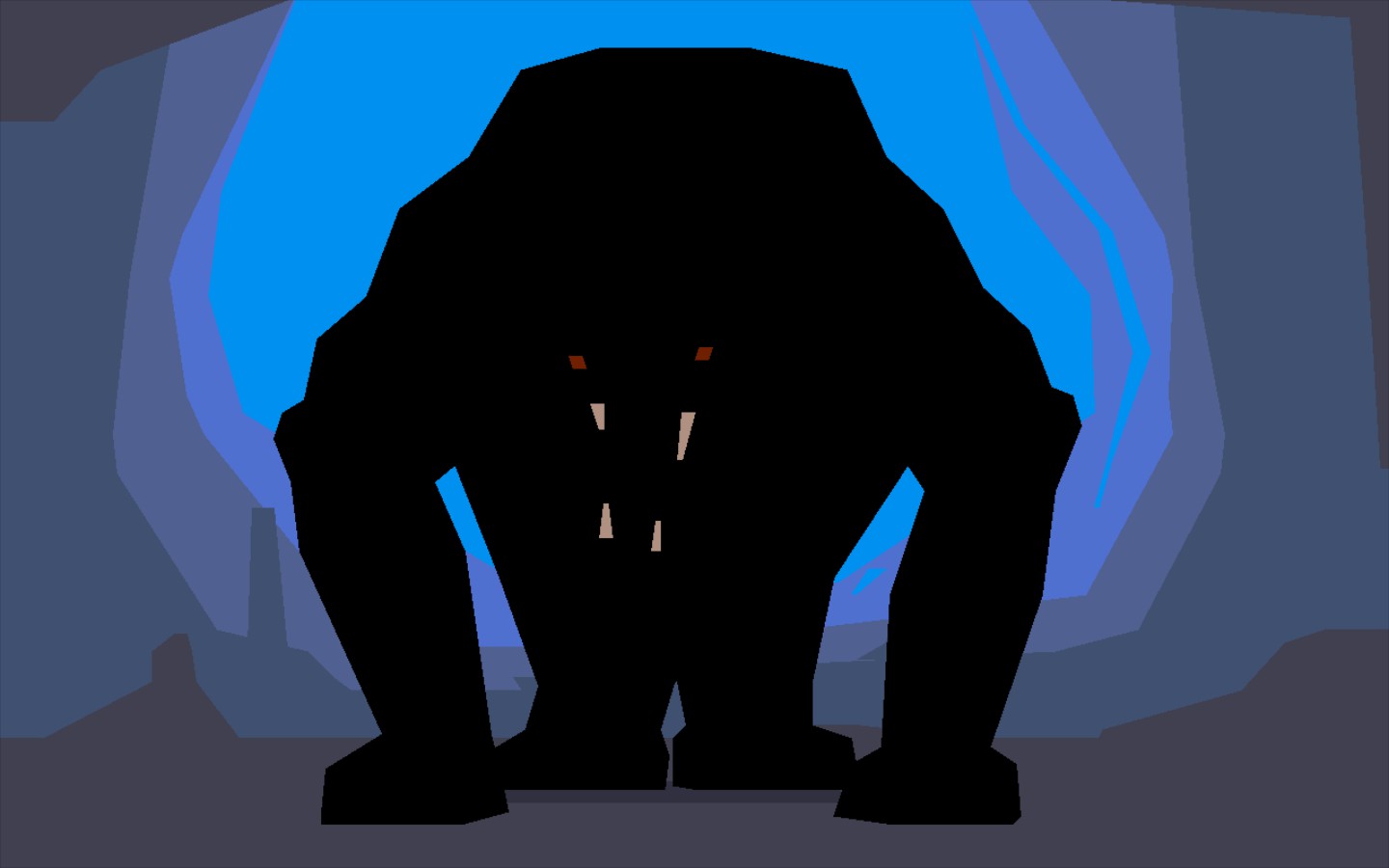 To me, this is a very special title. It was the first game that made me realise that a mature (from a technical perspective, not an age-appropriate one) and compelling story could be told through a game - all without one single word of spoken (human) dialogue. It was the first game that made me believe that games could be art. I remember being touched and moved in ways that no other game before (and very few games since) had done, and I remember being amazed and inspired.


Below are some thoughts from Ryan Gordon which he originally shared with me for my more in-depth article.

QuoteThis was a pretty easy Linux port: it already had a Mac port that used OpenGL, and a large piece of the framework was open source already (Cocos2d-x). There _is_ some Linux support in Cocos2d-x, but I threw most of it out. Whatever version of Cocos2d-x we were on looked like the Linux support was experimental, incomplete, or maybe just unmaintained. My new Linux code here cannibalized the Mac and Windows versions and glued it all together with SDL2.

SDL2 filled in other niceties, too, like FULLSCREEN_DESKTOP support and game controllers, so you can get a pretty console-like experience out of the game (I hope!).

Most other platforms used FMOD for audio, but since the game only use it for simple playback of audio, I reimplemented just the pieces of FMOD it used with OpenAL. As far as the game knows, it's still talking to FMOD, so I didn't have to destabilize any other platforms with the change, and we could avoid paying a licensing fee and move to a standard, open source library here, with all the benefits that brings.

There's another benefit that no one was thinking about 20 years ago: if you have an imaginary machine that deals with rendering polygons, you don't have to map them to pixels in video RAM. Your imaginary machine can have a GPU do it at high resolution...and we do! With no changes to the original game. It's sort of wild.

For the Linux port of Another World, I didn't have to touch the virtual machine code at all. What was probably written in machine-specific assembly in the past, the newer versions of Another World have it in nice, portable C++. I didn't even have to look at the source code to that part; the effort was all in getting bits to the screen and speakers, and reading input devices. 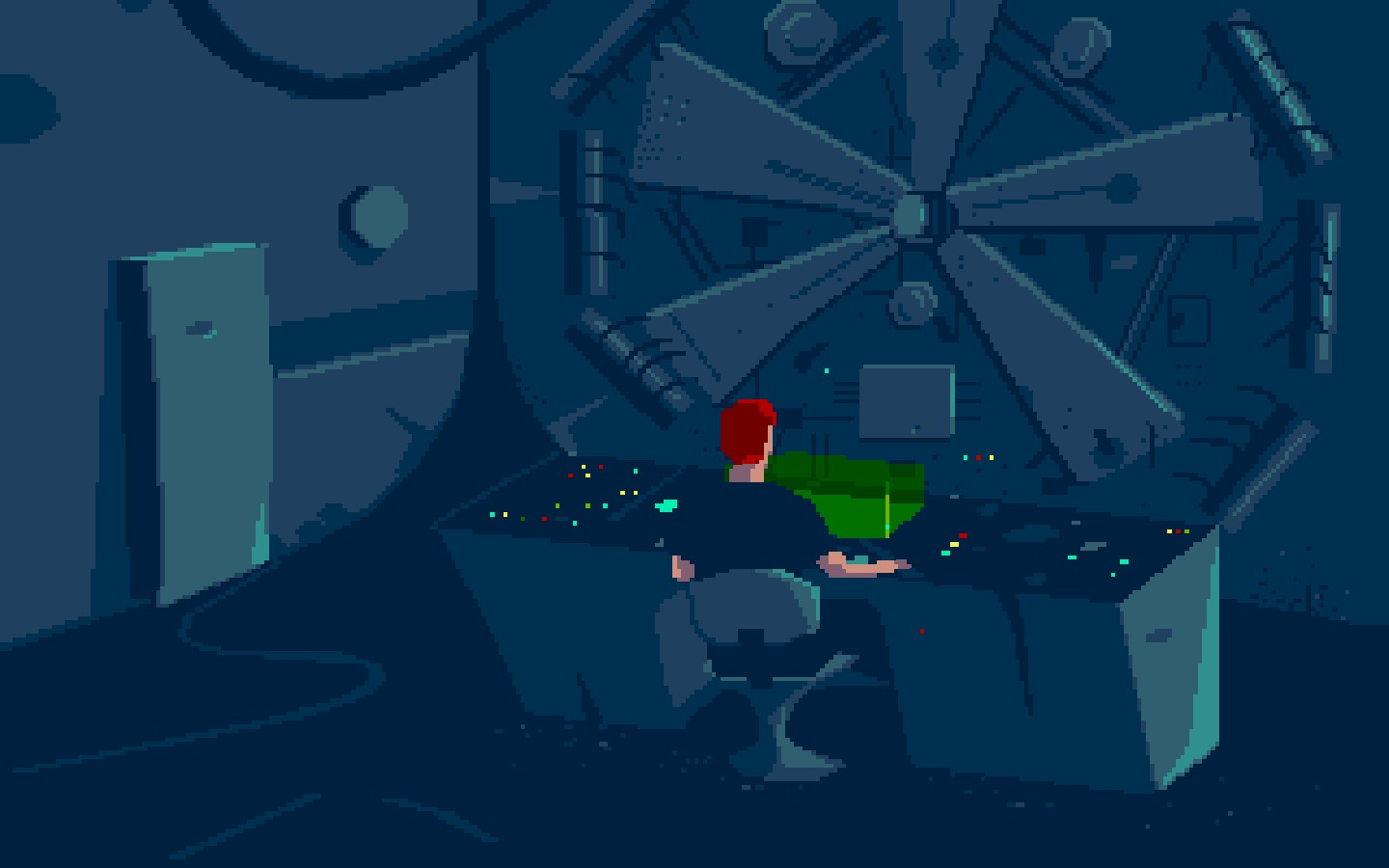 Another World is currently available for Linux on Steam, and I imagine we'll see it appear on other Linux supporting platforms such as GOG soon.

Article taken from GamingOnLinux.com.
Tags: Action, Platformer, Steam, Survival
0 Likes
We do often include affiliate links to earn us some pennies. We are currently affiliated with GOG, Humble Store and Paradox Interactive. See more here.
About the author - Cheeseness

I do more stuff than could ever fit into a bio.
See more from me
The comments on this article are closed.
26 comments
Page: 1/3»

View PC info
Interesting read, thanks to everyone involved in this.
Is nice to see these gems from the past landing on Linux.
1 Likes, Who?

View PC info
Cheers!
0 Likes
Skully 16 September 2014 at 8:26 am UTC
Thankyou Cheeseness and Icculus, This is one of my favourite games ever made.
I had already bought it the moment it arrived on steam months ago. Figured I would 'wine' it
one day if a linux version didn't come. But now I don't have too.

I will buy a copy for linux for my partner and both our daughters.

Cheeseness, I am sooo jealous of your presskit!
1 Likes, Who?

View PC info
I knew icculus was trying to get in touch with Éric Chahi a while ago for a Linux port, that's great it happened!

Now I'm hoping it will come on GOG soon, as I bought it there a few years ago (already played the original version on Amiga in 1991, was glad to see the release of the anniversary edition).

I'm wondering if it would be added to the current Humble Indie Bundle today; the timing looks adequate...
0 Likes

I wonder why Icculus used OpenAL and not SDL_mixer.
0 Likes
1/3»