Make sure your sound is up, it's not about the video, but what's said.

I tend to babble on a bit during livestreams as my mind ends up wandering, but a viewer managed to catch this clip which I just had to share (thanks to Leeo97one for posting it in our Discord):

I also ended up comparing different Linux distributions to Pizza toppings for some reason. If you want to catch more nonsense like that, be sure to follow us on Twitch.

In April 2010, I was posting about tiny indie games like Osmos being released for Linux (Osmos is awesome though). I thought to myself back then "this is incredible!", how little did I know that a few years later I would be livestreaming a game of Rocket League full of Linux players.

We may not get every AAA release ever, but what we do get is usually quite good. We have more games on Linux than I ever thought possible! We have even more arriving this year like Civilization VI and I'm sure there will be plenty of others announced as time goes on.

Linux is too small to get the majority of AAA games right now, as we would be spoilt for choice and our market-share would be stretched too thin across too many games, resulting in lower sales and less friendly developers in future. Essentially, too many big games right now would probably be harmful to our growth as a gaming platform. I'm happy with what we have now, and as we grow you can be sure we will get more.

Just today I setup another Antergos PC in my home attached to my TV, and GNOME Shell works surprisingly well on a big screen: 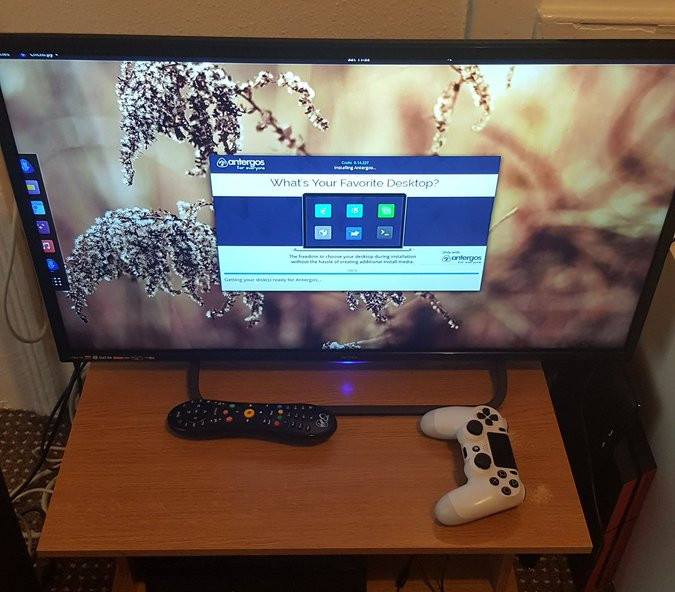 My family now play Slime Rancher on the family TV, and they absolutely love it.

It was originally going to get Windows 10 on it for various Windows-only children's games, but no matter how it was copied onto a USB drive Windows 10 just refused to boot. It's funny how much easier I find Linux to be at almost everything it's really quite amazing. First attempt at getting Antergos burnt onto a USB worked without a single issue.

Be sure to share your interesting stories in the comments. Article taken from GamingOnLinux.com.
Tags: Editorial, Video | Apps: Rocket League
21 Likes
Share

dmantione 21 Jan, 2017
View PC info
I'm happy that you failed to install Windows. It is really this kind of pragmatism that kills our market share in surveys. Make the Windows-only child games run with Wine, it is acceptable to use it in these kind no other possibility "emergency situations". I would have chosen SteamOS for a TV though.
6 Likes, Who?

View PC info
Yes, this part of the livestream really marked me. Glad that this clip can illustrate such an article! ^_^

Quoting: GuestI went to try your Antergos and it failed to boot after installing twice.

Same. On my Chromebook it never finishes the install and on my desktop it doesn't correctly connect to the university's ethernet so I can't install it.
0 Likes
Aryvandaar 21 Jan, 2017

View PC info
I tried Antergos some years ago on my desktop. It was pretty straight-forward and I didn't have any problems. Definitely one of the nicer distros out there, but I feel more at home with Manjaro.

Quoting: dmantioneI'm happy that you failed to install Windows. It is really this kind of pragmatism that kills our market share in surveys. Make the Windows-only child games run with Wine, it is acceptable to use it in these kind no other possibility "emergency situations". I would have chosen SteamOS for a TV though.

The thing is though, not all of us are able to make every single decision alone. While I am obviously a Linux user and have been for many years, I don't make every decision for my family by myself. Some things you have to give way on, luckily for me this time around Windows showed how much of a nuisance is that my way won in the end anyway!
5 Likes, Who?

View PC info
The fact that having reached basic parity with other platforms warrant moments of epiphany is a lot more telling of the whole situation. No user should ever have to stop and think "wow, we're finally being treated as equals".
1 Likes, Who?

View PC info
Avout Antegros: I installed it on my secondary computer and also had several problems with stability of the installation, but eventually it went smoothly (I made several attempts) and now the system works great.

Yes, it is amazing how far Linux gaming has progressed since Valve started trying to marshal support for the platform. Before that, there had only really been patchy support from the likes of Loki, LGP and a few other small porting houses; now we have over 3000 Linux games on Steam.

You are also right to point out the potential for stretching the Linux purchases too thin. Arguably, this may already be the case, as even the most ardent Linux supporter would be unlikely to buy 3000 games; I have about 100, have played only a fraction of those, and I'm sure that I will never do justice to many titles.

My real concern for the future of Linux gaming as a whole ( as opposed to any particular game/genre ) is in understanding the reasons why we have the current level of support, and how the motivations of the players involved might change.

For example, a major reason for Linux game availability is the rise of high quality game engines, many of which have added Linux support. As these engines generally have many Indie developer customers, I'm guessing that as long as the Indies make enough from their Linux sales, then it will be worth the engine companies continuing to support Linux. But I don't know of any concrete figures that would indicate that continued Linux support is worth it for these companies.

A second reason for increased Linux support is the general improvement in tools/techniques/understanding of cross-platform development over the last decade. The failure of Microsoft to gain the same stranglehold on mobile devices as on the PC ( and the rise of iOS and android ) along with greater exposure of developers to Unix/Posix at University are important there. This is an improvement that is likely to continue.

But for me, the main reason for improved Linux game support remains as a hedge against the fear of the walled garden ( Microsoft, Apple, Google or whoever else ). It is certainly the reason Gabe Newell gave for developing SteamOS and the Steam Client for Linux. It is also probably why several of the hardware and game software companies are happy to support Valve in balancing power between the different industry players. Again, I have seen no figures as to the costs for these Linux supporting companies, and how they justify them against monopoly threat.

Obviously the ideal safeguard would be for Linux to become a significant games platform ( in the region of 20% market share ), but it is unclear how this might occur. The vast majority of people ( gamers included ) simply don't care enough, and/or are not sufficiently able to change their OS from pre-install, and indeed many would actively not want to. I honestly doubt that organic growth would ever result in Linux getting above 5% market share, so real growth depends on pre-installs, which have failed to gain traction so far.

I would certainly be interested to hear any concrete figures you may have heard.

View PC info
I'm curious, how was gaming in Linux before 2013? I only became aware that Linux was anything more than a CLI OS(as in, completely lacking any GUI elements) in the second half of 2013 and installed Ubuntu for the first time in October of that year, after Steam had officially started supporting linux.
1 Likes, Who?

Mountain Man 22 Jan, 2017
View PC info
It is quite amazing how far we've come in a relatively short amount of time. I just hope Valve stays the course, because it wouldn't have happened without them, and Linux gaming, at least at this point in time, probably wouldn't survive without them.