ARK: Survival Of The Fittest the free online survival arena is now on Linux & SteamOS 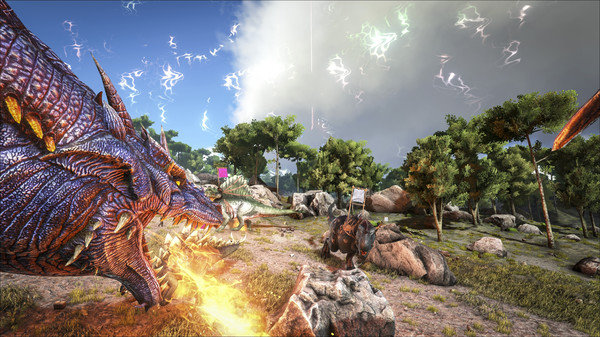 ARK: Survival Of The Fittest, the spin off from ARK: Survival Evolved is now available on Linux & SteamOS, it's free too. Completely free that is, no pay for anything here as they are funded by the original ARK.

This appeals to me much more than the original ARK game, as there will be more focus on action and taking down other players. That just seems more interesting than generally surviving to me.

It might take you a while to get into a game, as you have to wait for everyone to either join or create a tribe before the game begins. Prepare to wait a while, as I joined a few with people just standing around doing nothing. I hope they implement a timer for people to join or create tribes so people can't spoil it for others.

It's also in Early Access, so it's not finished yet. Like ARK: Survival Evolved, ARK: Survival Of The Fittest requires a pretty decent computer to run it properly. I really hope the developers put some real effort into the performance of both games soon, as the performance is totally unsatisfactory even on my 980ti. Even so, it's still great to get both games before their official/full release.

About the game (From Steam)
Welcome to ARK: Survival of the Fittest, the first ever M.O.S.A. - a Multiplayer Online Survival Arena - that Studio Wildcard designed for the burgeoning wild west of eSports. A spin-off from the most popular open-world Early Access game on Steam ARK: Survival Evolved, ARK: Survival of the Fittest (SotF) pits up to 72 combatants in an action-packed struggle for survival where players are ultimately pushed into an epic final showdown where only one “Tribe” will make it out alive.

whatever 11 Apr, 2016
View PC info
Completely free? Not even the free-to-play typical gold for premium stuff? I'll surely give it a try then!
1 Likes, Who?

I wonder how people who paid for the original game feel about that?
0 Likes

Dont see an issue, i purchased it and I am fine it helped them create a spin off free for all.
3 Likes, Who?
Gnurfos 11 Apr, 2016
Does it have the same performance and ... correctness as the original ARK ?
0 Likes

from what I've seen of this version it's a watered down version of ARK: Survival Evolved and more specifically it's very much like a "Hunger games" style atmosphere. tailored for shorter games to be more esports oriented.
0 Likes

managed to kill 1 person but got killed by another one :)


its allright for a free to play game, runs decent, but not perfect, has some massive drops here and there.

fagnerln 11 Apr, 2016
View PC info
I haven't played, but look like that isn't optimized even on Windows.
0 Likes

Quoting: fagnerlnI haven't played, but look like that isn't optimized even on Windows.

Why would it be? It's still in Early Access.
0 Likes

View PC info
seems the game still looks terrible on linux, will that ever get fixed ?
1 Likes, Who?
TheRiddick 11 Apr, 2016

View PC info
Last time I checked this didn't run very well at all for AMD hardware. I only tried main non-free game however, I REALLY hope they ad in Vulkan support in the future as it really needs it.
0 Likes
1/2»
While you're here, please consider supporting GamingOnLinux on: