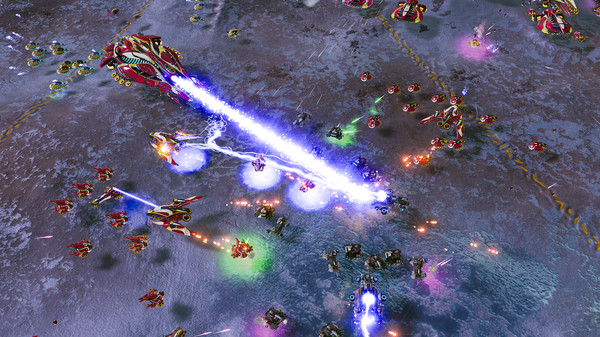 A developer of Ashes of the Singularity has stated very clearly that both Vulkan and Linux/SteamOS are still planned for the big RTS game.

QuoteVulkan will come first. When we speak of LInux support, we mean SteamOS support. So only Linux distributions that support Vulkan are going to be able to potentially run Ashes.

It could well be our first Vulkan-only game Linux, as it doesn't sound like they will be doing OpenGL at all.

Great news, as I've owned it for quite some time, cant remember how or why I own it but I do and I've been waiting to play it on Linux.

About the game
ake command of an entire world’s resources to build up massive armies, research new technologies, and annihilate all those who stand in your way! This new, massive-scale real-time strategy game will have you managing vast armies and fighting a war on multiple fronts against your enemies.

Wage a War Across an Entire World
With the unparalleled power of the world's first native 64-bit real-time strategy game engine, Ashes of the Singularity allows for maps of unprecedented size and detail.
Over the course of your war, you will upgrade your technology, build orbitals, construct thousands of units and conquer the regions of the world in an effort to annihilate all opposition. Article taken from GamingOnLinux.com.
Tags: Steam, Strategy, Vulkan
0 Likes
We do often include affiliate links to earn us some pennies. We are currently affiliated with GOG, Humble Store and Paradox Interactive. See more here.
About the author - Liam Dawe

edo 22 June 2016 at 5:49 pm UTC
View PC info
Since bumblebee doesnt support vulkan I guess I wont be able to play it. Still, I wonder when they will start working on it

Why don't you switch to nvidia-prime?
1 Likes, Who?

View PC info
I think it's about time Devs started ditching OpenGL. I'm interested in this game since it's also on GOG, here's hoping they won't lock it to Steam.
1 Likes, Who?

Why don't you switch to nvidia-prime?

because I have tried to enable it on manjaro but I always end with the system not booting (since it requires chages in xorg.conf or equivalent). And I know than there is an easy way to use reverse-prime, but its only for ubuntu-based distros.
And for what I have seen, primus doesnt support it either https://github.com/Bumblebee-Project/Bumblebee/issues/769

View PC info
I'll believe it when I see it. I'm surprised how long it is taking them to release the game on Vulkan (and therefore Linux) considering they were promoting Mantle so long ago. Meanwhile, no problem with DX12 support from the beginning. It was/is hoped that this would be a great Vulkan benchmarking tool, I wonder what the hold up is.

QuoteWhen we speak of Linux support, we mean SteamOS support.

That's an odd distinction when you consider that SteamOS is Linux.
0 Likes

QuoteWhen we speak of Linux support, we mean SteamOS support.

That's an odd distinction when you consider that SteamOS is Linux.

Actually it's quite a useful distinction I think. SteamOS is a distribution of GNU/Linux, (yes I'm one of those people who always include the GNU part) but with specific drivers, interface, compositor, etc. It gives you a good idea of what they'll be testing against, and know what they'll support. As I mentioned before, I don't mind this, in fact I think it's something SteamOS is quite useful for.
2 Likes, Who?

mirvAs I mentioned before, I don't mind this, in fact I think it's something SteamOS is quite useful for.

I don't mind it, either, since a static platform is easier to develop for, and if it will work on SteamOS then it will work on any distro (at least in theory), but the way they say it almost makes it sound like SteamOS isn't Linux, when it actually is.
1 Likes, Who?
1/3»