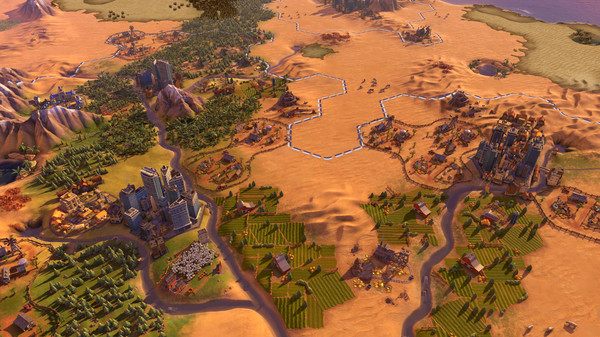 Today the 'Australian Summer' update landed for the Windows version of Civilization VI [Steam], but the Linux update is a little further out.

I spoke to Michael Blair from Aspyr Media who confirmed to me it's due in a few weeks:


QuoteWe are working on getting the submission build ready for 2K approval, and hope to be live in a manner* of weeks.

*They meant matter, to be clear.

While it's a shame they aren't able to get it ready for day-1, it's good to know they aren't sitting by making us wait longer than needed. Hopefully 2K won't take too long to approve the Linux update.

The Australian Summer update adds in: Steam Workshop support, the ability to play in actual teams and not just formed alliances (multiplayer), True Start Location to put Civilizations on the map at their geographic origin and more new features. On top of that there's plenty of balance fixes, AI improvements and bug fixes.

It also adds in a paid DLC for the Australia civilization which comes with a scenario pack too. Article taken from GamingOnLinux.com.
Tags: Aspyr Media, DLC, Strategy, Upcoming | Apps: Sid Meier's Civilization VI
8 Likes , Who?
Share

I am the owner of GamingOnLinux. After discovering Linux back in the days of Mandrake in 2003, I constantly came back to check on the progress of Linux until Ubuntu appeared on the scene and it helped me to really love it. You can reach me easily by emailing GamingOnLinux directly.
See more from me
Some you may have missed, popular articles from the last month:
The comments on this article are closed.
14 comments
Page: 1/2»
Guest 24 Feb, 2017
Typo dude.

'a manner of weeks'
0 Likes

'a manner of weeks'

Ah yes, tired eyes by both me and Aspyr there.

Thanks, in future, please do use the submit corrections feature.
0 Likes

View PC info
Question is: How is mod support? I tried few mods and they didnt worked at all. I tried classical renaming scheme (for some reason, Civ6 files on Linux are all lowercase, although official DLCs dont do that), but it didnt worked. So I am a bit baffled.
0 Likes

View PC info
Anyone notice on their twitter they mentioned no ETA for "PC/MAC/Linux" cross platform multiplayer? Using PC to mean Windows. Grateful for CIV VI on Linux but not encouraged by their behavior towards Linux recently. Would have loved to have gotten Jade, KOTOR I and/or Mafia II on Linux.
0 Likes
Swiftpaw 25 Feb, 2017

View PC info
I just want to know if performance is going to ever be improved or if I'm going to be waiting for years before playing this.
0 Likes

Quoting: m2mg2Anyone notice on their twitter they mentioned no ETA for "PC/MAC/Linux" cross platform multiplayer? Using PC to mean Windows. Grateful for CIV VI on Linux but not encouraged by their behavior towards Linux recently. Would have loved to have gotten Jade, KOTOR I and/or Mafia II on Linux.

Because they're also publishing Windows and XboxOne versions of Layers of Fear.Look at their tweets and likes.They're more and more Windows related.If they can tie some indie developers to them and make businesses bigger,they will drop Mac and Linux things.At least Linux.

If we can't start to get in house ports from big studios,i'm afraid this inevidable.
0 Likes

View PC info
Aspyr is gradually moving away from Linux and has been for a while now. That doesn't mean it's all doom and gloom. Firaxis seems to be fairly committed to Linux (they had all their recent games ported to it, IIRC). If Aspyr doesn't want to port for Linux anymore, they will find someone else to do it for them. Or -gosh- really do it in-house. The next Civ title is probably 3-4 years away, maybe by then multi-platform publishing is the new normal, who knows!
2 Likes, Who?

Mountain Man 25 Feb, 2017
View PC info
Where did you hear that Aspyr is moving away from Linux?
0 Likes

Quoting: Mountain ManWhere did you hear that Aspyr is moving away from Linux?

I thought them barely doing any Linux ports anymore would be a hint?
0 Likes

Quoting: Mountain ManWhere did you hear that Aspyr is moving away from Linux?

I thought them barely doing any Linux ports anymore would be a hint?

Well, in my interview with Aspyr Media they did say this:


QuoteIts no secret Steam machines haven't taken off as well as the Linux community had hoped, but that doesn't prevent us from considering titles for the platform. It does however make us be more selective as to which titles we chose to port.

So it's not quite a priority any more.
0 Likes
1/2»
While you're here, please consider supporting GamingOnLinux on: