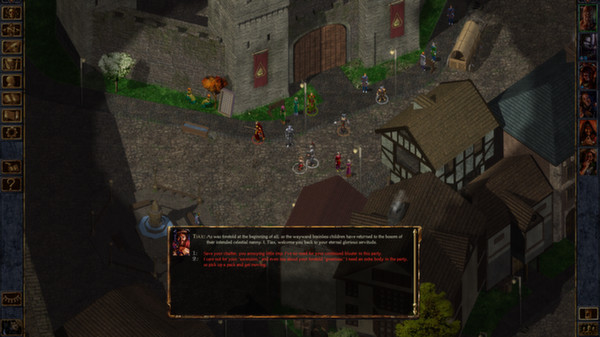 It took longer than we ever hoped, but Baldur's Gate: Enhanced Edition is finally in opt-in beta for Linux. It may have taken over a year and a half, but they really are about to deliver on their promise. Better late than never right?

The password is "marchofpenguins", so you need to use that on the beta section of the game properties on Steam.

Official About
Since its initial release in 1998, Baldur's Gate has entertained millions of fans around the globe and has received countless awards. This classic saga of mystery, intrigue, and adventure has set the standard for Dungeons & Dragons™ computer roleplaying games ever since.

Be sure to let us know how your experience goes, and check out Baldur's Gate: Enhanced Edition on Steam. Article taken from GamingOnLinux.com.
Tags: Beta, RPG, Steam
0 Likes
Share

Stupendous Man 27 Sep, 2014
View PC info
Actually it doesn't seem necessary to activate the beta - I was able to download and play the game without doing so.
0 Likes

View PC info
Finally! :D I hope we'll see it outside of Steam as well!
0 Likes
BillNyeTheBlackGuy 27 Sep, 2014
Still not interested until I get my mods to work, but this is a nice first step. :D
0 Likes

What mods?
0 Likes
GoCorinthians 27 Sep, 2014
View PC info
Dammit Im feeling more and more ashamed of saying that I bought windows games because there was only few in linux that matters for me...:'(

BG is a 16 year old game with a community that's still modding today. It would be impossible to list all the mods available.
0 Likes


BG is a 16 year old game with a community that's still modding today. It would be impossible to list all the mods available.

Sorry, I should have been more specific. What did you refer to as "my mods" that you consider so critical that you're not interested in playing till they work?

Edit: actually "what mods" was altogether poorly worded, I really meant "which mods"
0 Likes
1/4»
While you're here, please consider supporting GamingOnLinux on: