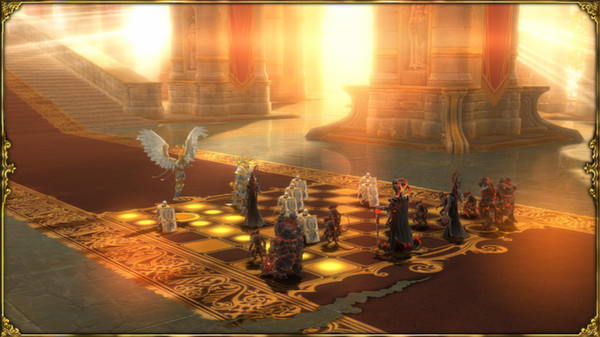 Topware Interactive have now put up a Linux beta for 'Battle vs Chess' [Steam] that makes use of Wine. It's really cool to see them do this.

Find out more info on the Linux beta here.

While Wine is a bit of a mixed bag, developers using it to bring old games to Linux and actually supporting it is fantastic.

About the game (Official)
Commanders, assemble your armies! BATTLE vs. CHESS calls for an interactive feather duster, chartering the successful chess game principle into the present day multimedia world. Animated fantasy figurines assemble in magical worlds and await your command! As a Commander, execute skillful maneuvers on the game board and catapult yourself directly into the battle with devastating attacks, chessman vs. chessman.

Chess – the unrivalled champion of strategy games has been attracting players of all ages for countless centuries. BATTLE vs. CHESS is based on the simple yet ingenious concept of creating a fusion between professional chess software and upbeat, combat oriented game mechanics, complete with richly animated game pieces. At the outset of a match things seem quite basic: a 3D game board pits two opponents against each other in a seemingly ordinary game of chess. The game board itself is set in one of six available environments, each with its own unique landscape and presentation features. Traditionally recognized game pieces have been given a facelift as hulking stone golems and beastly chimaeras take the place of the typical rook and knight pieces respectively. Article taken from GamingOnLinux.com.
Tags: Beta, Steam, Strategy, Wine
0 Likes
Share

Maki 17 Oct, 2016
View PC info
Someone on the Steam Forums went insane claiming wine ports are damaging to their system. I don't agree with that.
I fully applaud TopWare's attempts to bring their older games to Linux.
6 Likes, Who?

View PC info
I bought this game back before I completely stopped playing games under windows, so for me this is especially excellent news - I already have it in my game library and can now properly play it again.
I don't mind it being a wine "port" if it works - which it does, to a degree. Some online activation required, and I don't know if it always needs a connection, but I doubt any old drm system will be removed. Otherwise, it seems to run ok.
1 Likes, Who?

MaxPower 18 Oct, 2016
View PC info
Having wine port supported by the dev is a very good thing. I don't really care about native or not, the main points are:

* Acceptable performance
* Supported by the dev

However looking at one of the first review on steam, I will stay away from it http://steamcommunity.com/id/zest_riddler/recommended/211050/
1 Likes, Who?
Guest 18 Oct, 2016
We are still not in the position to moan about porting methods. Getting new titles is a good thing.
0 Likes

View PC info
So basically it's a modern(ish)-day Archon?

Isn't suppouse to happen on September?

It's been postponed to "this year".


Last edited by Anjune on 19 October 2016 at 3:21 pm UTC
0 Likes
While you're here, please consider supporting GamingOnLinux on: