By Cybolic - 13 June 2017 at 1:07 pm UTC | Views: 22,060
Announced recently at the Microsoft E3 conference, "The Last Night" is a "post-cyberpunk", pixel art adventure game inspired by Flashback and Blade Runner that blends traditional pixel art with 3D composition giving the game a very cinematic look. While the game's website doesn't directly mention Linux, the trailer and the game's Steam page clearly mentions SteamOS as one of the target platforms. 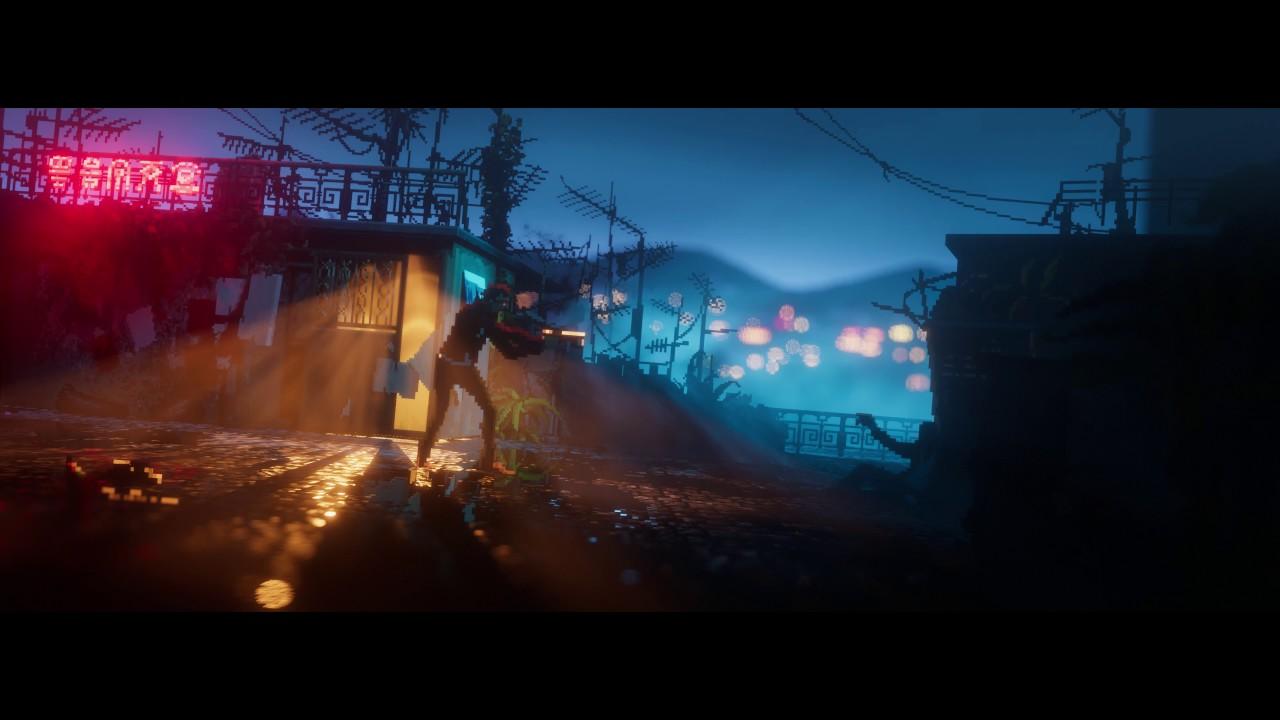 YouTube videos require cookies, you must accept their cookies to view. View cookie preferences.
Accept Cookies & Show   Direct Link
The game is described as an alternate take on the cyberpunk genre, based on a 6-day prototype from 2014's #cyberpunkjam (playable on Linux), with the following text providing the outline of the story:


QuoteHumans first knew the era of survival. Then they knew the era of work. Now they live in the era of leisure. Machines have surpassed human labour not only in strength, but in precision, intellect, and creativity. Stabilised by universal income, people struggle to find their calling or identity, and define themselves by what they consume, rather than what they create.

The Last Night immerses you in the everyday life of Charlie, a second-class citizen living in a city brimming with augmentation and citizens living a gamified existence — none of which Charlie can experience himself due to a childhood accident. Apathetic and disheartened by the seemingly pointless world around him, Charlie is presented with an opportunity to take matters into his own hands. But at what risk?


While this does sound like an interesting take on cyberpunk, paired with tweets from a few years ago by one of the game's creators, Tim Soret, it might not be something everyone is entirely comfortable with. Rock, Paper, Shotgun has collected the relevant links if you want to know more.
No matter the influence or importance of those tweets, this sure looks like a game to keep an eye on. Article taken from GamingOnLinux.com.
Tags: Adventure, Cyberpunk
13 Likes
Share

We do often include affiliate links to earn us some pennies. We are currently affiliated with GOG and Humble Store. See more here.
About the author - Cybolic
I used to be a proud Amiga user, got stranded with Windows for a few years and finally found freedom in Linux in the year 2000. These days I work in development, dabble in music and every few weeks, I go back to trying to make that one game I dream of.
See more from me
Some you may have missed, popular articles from the last month:
The comments on this article are closed.
32 comments
Page: 1/4»

View PC info
Kinda looks like some pimped up Sierra game from the old days. Looks really weird and cool at the same time but I like what I see.
0 Likes

View PC info
This was one of the games that appealed to me by the look they created. I had already mostly dismissed it because it was announced in the M$ presentation. Good to see that it may actually come after all.
2 Likes, Who?

View PC info
You had me at Flashback and Blade Runner. I'm in!
2 Likes, Who?

View PC info
Oh wow - what a fantastic art style! And this is coming from someone who are allergic to the "retro" thing. But this... Seems to be just the perfect blend.

Let's hope the actual content is as good as the coating!
0 Likes

View PC info
During the Microsoft event , two games got my attention.

The Last Night and Metro Exodus.

I hope Metro comes too , i have Metro Redux series and they're running great.
4 Likes, Who?

View PC info
Would be great if this site could just not parttake in the outrage-baiting "cleanse the industry of wrongthing" nonsense at all.
2 Likes, Who?

Doc Angelo 13 Jun, 2017
View PC info
I really dig the art style and the animation. I'm looking forward to it! It's a good thing that so many Microsoft titles are released and coming for Linux/SteamOS.

QuoteNow they live in the era of leisure. Machines have surpassed human labour not only in strength, but in precision, intellect, and creativity. Stabilised by universal income, people struggle to find their calling or identity, and define themselves by what they consume, rather than what they create.

I hope that this game does not jump onto the "Automation is evil!" bandwagon. Not that a medium should not be allowed to portray a possible future in that way, but I wouldn't particularly like it if the game world would practically send the message that automation and universal income are generally bad things. My point of view is that people will create even more, not less - while they have more time to consume the stuff other people created. I think FOSS-software, -art and -hardware will play an important role in such a future.
1 Likes, Who?

View PC info
It reminds me of the game Another World too. Ill buy it if there's a Linux port.
0 Likes
1/4»
While you're here, please consider supporting GamingOnLinux on: