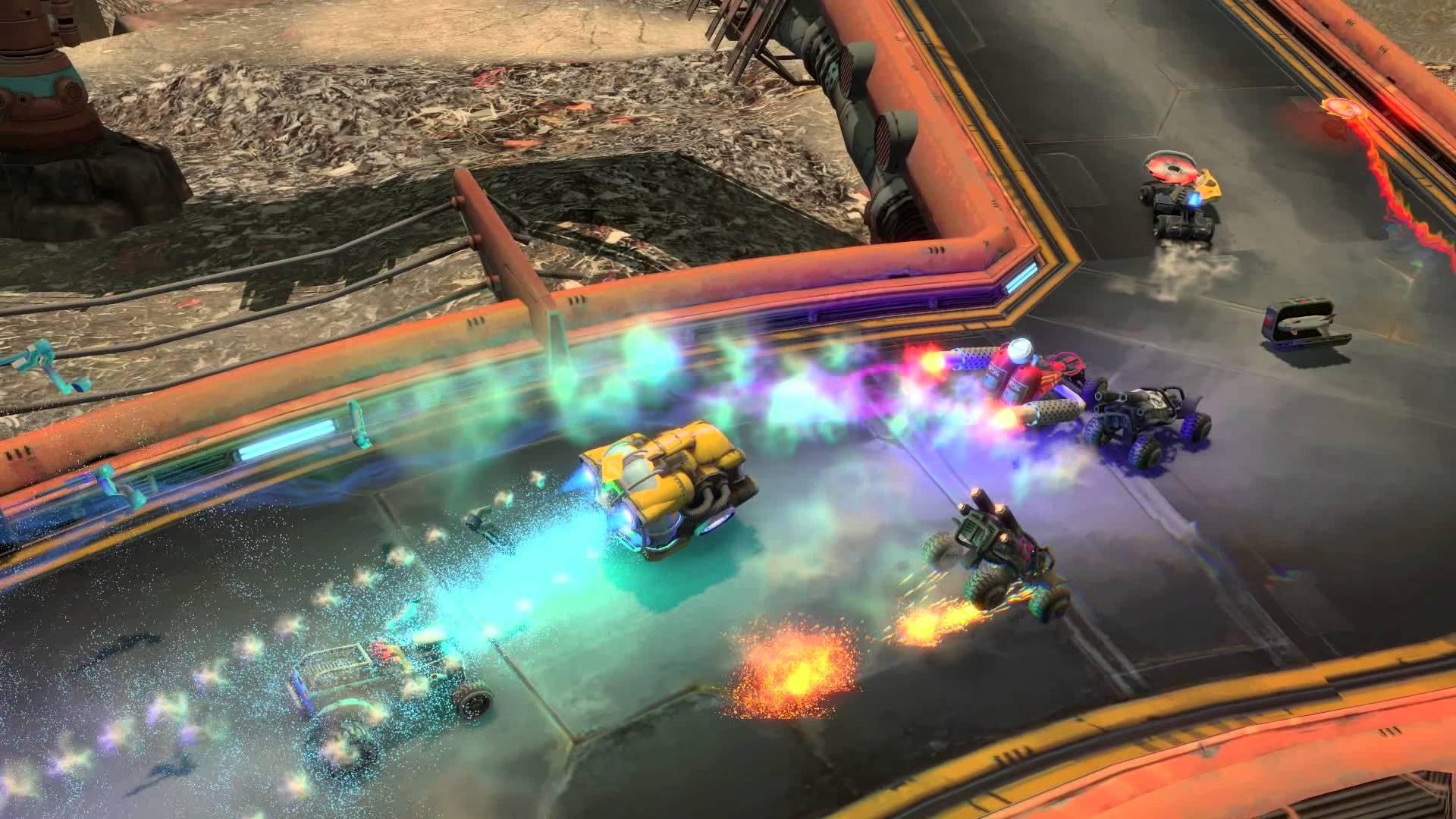 My thoughts
After the utter disgrace that MadOut was, I was in the market for something new to play and I already owned BlazeRush from a sale. I mentioned the release of BlazeRush, but never actually got around to trying it—until now.

It actually reminds me somewhat of Mario Kart and some old Micro Machines games I played (possibly on the Amiga), and it’s good fun too.

You have multiple vehicles to choose from and these can include: Karts, flying vehicles, tank like vehicles and more.

You pick up powerups as you go around the track, like a chaingun or a rocket and you can use them to put people off, or to knock them right off the track. It’s quite hilarious to do it. I especially like the fact that if someone is closing in on you, and you have a gun you can quickly spin around and try to hit them with it.

The handling on the vehicles is ridiculous, but in the fun way that is. You float about all over the place, which is good for trying to knock people off, but I’ve falling off a track plenty of times trying to do it—oops. There was one point where I didn’t realise part of the track didn’t have a barrier, and to my shock I actually made it to the other part of the track while floating, I think that was awesome as I took first place too.

It has an online mode, which I tried out as well, and to my surprise they were actually people playing! They didn’t stick around for long, but I still got to experience how frantic it is with real drivers, and that just made me love this little game even more.

About the game (Official)
BlazeRush is a dynamic arcade racing survival game with no health, no levelling and no brakes!
You can assemble a team of friends to play in local or online multiplayer, choose a car to your taste and chase, blow up and cut off!
Adapt your style and tactics to new enemies, obstacles and tracks.

If you like these kind of "Death Rally"-like games, take a look at Little Racers Street, unfortunately it doesn't have local multiplayer though.
0 Likes

View PC info
Single player can be a bit hard at times, but I had a blast playing this with a friend.

It is very nice as a party game because it levels the playing field for both experienced players and beginners. At times I would totally own my buddy thinking I am invincible, just so that moments later he would shoot a homing missile right up my shiny metal ass launching me right off the track. Our favorite mode was Rocket Party where you would only get explosive stuff. That is hilarious.

My only complaint is the lack of maps, so it eventually becomes repetitive.
1 Likes, Who?

I end up using the keyboard, I cant work out if the joypad controls are broken or just really, really bad ? They don't seem to make any sense and up is down, right is left and its just err awful.

I end up using the keyboard, I cant work out if the joypad controls are broken or just really, really bad ? They don't seem to make any sense and up is down, right is left and its just err awful.

its fun using the keyboard though :)

Use your gamepad's thumbstick. It's the only real way to play this game.

View PC info
This game has been one of my favorites for a while. Maybe we can arrange a time when those of us who like can play online.
0 Likes
While you're here, please consider supporting GamingOnLinux on: