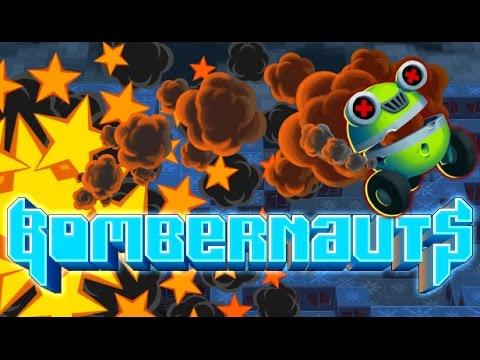 YouTube videos require cookies, you must accept their cookies to view. View cookie preferences.
Accept Cookies & Show   Direct Link
Bombernauts is pretty much bomberman on a year long diet of steroids, as it's insane. We should get a game of this going sometime. This is definitely a contender for the next multiplayer GOL livestream that's for sure. It's in Early Access, so we might leave it to bake in the oven a bit longer, it seems to run quite well though, with no obvious bugs I could find.

Truth be told, I didn't really have much of an idea of what I was doing, and the only game available to play in the lobby had a clear "no noobs" description, but I broke their silly rule and joined anyway. I thought it was odd, but it turns out that's the default description for creating a lobby, I think it's a bit silly but it's their game.

It's basically bomberman with crazy (and I mean insane!) powerups, a destructible environment and interesting levels. I had fun playing by myself just testing out all the different bombs available from the weird piñatas floating about, but I would like to try it out properly, so go buy it and join me.

About the game (Official)
Bombernauts is an explosive online multiplayer battle game with fully destructible voxel terrain. Throw stupid amounts of bombs to blow your robot friends off the world into the deadly lava below where they will surely die a fiery death! If that doesn't work, whack open a few piñatas with your trusty baseball bat, grab some overpowered powerups (like jetpacks, black holes, missiles, luchador masks, and more), and win that way instead! Do whatever it takes to be the last bot standing and claim your well deserved victory!

MightyTrollzor 21 Dec, 2015
View PC info
Already got that game gifted a long time ago. It got a quite steep learning curve for a party game. The hardest thing to get used to is the camera which behaves a bit too weird for my taste. The game can still be lots of fun especially if you play with some friends. Our teamspeak always devolves into of people screaming, laughing and spewing obscenities when bombernauts is played. One of the problems is that the userbase is really small. Usually its just me and my friends and sometimes one other server but hey, maybe GoL might fix that a bit. Also playing on Saturdays is recommended because of the Saturday special which makes this game even more crazy with some new gamemode / modifier.
0 Likes
While you're here, please consider supporting GamingOnLinux on: