Brawl of Ages, the fun and free to play 1 on 1 simple RTS game has a progression revamp 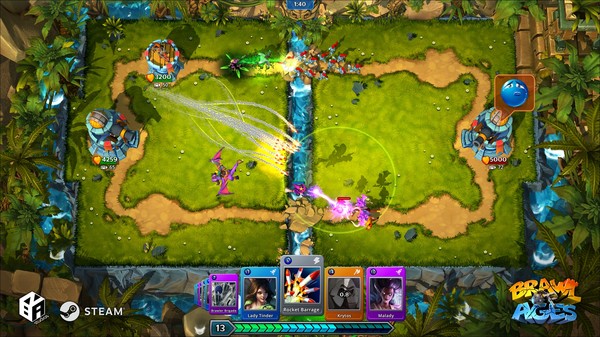 Brawl of Ages [Steam], a free to play game published by S2 Games has been through a bit of an overhaul and here's what's new.

They've massively changed progression, as it was too slow and boring. Now you unlock cards with either Valor (earned by playing) or Gems (purchased with money). Due to the change, everyone has been through a "respec", essentially a reset. That might sound harsh, but it's an Early Access game so change will happen.

You now have an account level, each level you reach offers up rewards like access to new cards, but these cards still require Valor to actually unlock them.

They've also added in basic quests, to help you earn Valor. You can find the release notes here.

I'm keeping a close eye on it, as when I tried it I found it to be really damn fun. Quick battles, easy to understand and good when you're short on time. It's also free, so you lose nothing by giving it a go. I recommend checking it out to see if it's your thing, since I enjoyed it so much.

I'm a big strategy game fan so it's right up my alley, even though it doesn't have base-building, it's more about the tactical decisions you make and you need to make them quickly. Article taken from GamingOnLinux.com.
Tags: Early Access, Free Game, Steam, Strategy
3 Likes , Who?
Share

View PC info
The revamp makes this much more accessible to new players. I'm really enjoying this game and I can't wait to see what they come up with next.
0 Likes

QuoteNow you unlock cards with either Valor (earned by playing) or Gems (purchased with money).

I use to play WOT and AW back in my windows days.
Those games felt you could either progress by having time or by having money.
Hate that style of mechanic in Free to Play so much. Made me waste sooo much money on free to play games in the past.
Will skip this for sure.
0 Likes
teldon 3 May, 2017
I would be very weary of S2 games, the maker of Brawl of Ages. They have a very, very bad habit of dropping development of their games out of nowhere. Strife being a really good example of that habit. Honestly, I would either wait for Minion Masters from BetaDwarf to come out on Linux or just play it in wine.
0 Likes
While you're here, please consider supporting GamingOnLinux on: