Broforce, one of the best action platformers ever just got a nice performance patch

Honestly, Broforce is a ridiculously good time for all involved while playing it. It just got a decent performance patch too.

Previously, some levels would take a while to load and it might seem like it had crashed—no more! Loading time for all modes has been drastically improved, as has overall performance of the game. They've also managed to iron out some of the lagging issues with their networking implementation. I tested it myself and indeed, it's a vast improvement. 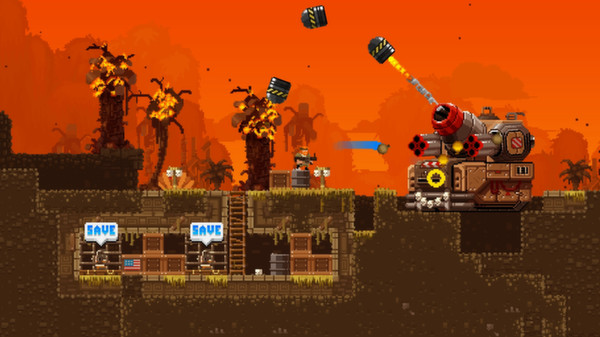 The developers also did a pass on the user interface, to fix multiple annoyances to make it a better game. There's also plenty of bug fixes.

Broforce is a game that firmly put action platformers back on my radar, at a time when I was getting a bit tired of the genre it gave me a renewed love for them. The mix of action hero parody characters, explosion everywhere along with destructible terrain and some levels inspired by the Alien series of films—there's a huge amount to enjoy.

Need more reasons? How about local and online co-op, where it becomes absolute madness. We had a huge amount of fun with it in the past, where "Oh god, everyone's dead, what just happened?" would be a regular thing, but it was truly hilarious.

This is a rare game where I would happily buy up multiple expansions for more missions and more characters, it's just that damn good.

You can pick it up on Humble Store, where it's currently 75% off. So what are you waiting for, bro? Also GOG and Steam directly, can't check if GOG have the patch yet as I don't own it there.

Article taken from GamingOnLinux.com.
Tags: Action, Platformer
9 Likes, Who?
We do often include affiliate links to earn us some pennies. We are currently affiliated with GOG, Humble Store and Paradox Interactive. See more here.
About the author - Liam Dawe

View PC info
I really appreciate Broforce too. Toying with the idea of buying a second copy to show the love to the developers. My first one is on GOG.
0 Likes

View PC info
No update on GOG yet, but hopefully it's coming soon.
0 Likes

Quoting: ShmerlNo update on GOG yet, but hopefully it's coming soon.

I've already been in touch with GOG to get it updated :)
2 Likes, Who?

Quoting: liamdaweI've already been in touch with GOG to get it updated :)

About missing GOG updates, there is something weird going on with inXile's satirical The Bard's Tale. I asked about it, but response was very vague.

Do you have any contacts in inXile who can help with this?

View PC info
Afraid not. Their reply was indeed a bit weird, who knows what "business-related reasons" are. Maybe they just don't think it's worth their time, which is sometimes the case and they just don't want to say so.
0 Likes

View PC info
Watching your multi-player mayhem on Twitch got me re-engaged in the game a while back :-)
1 Likes, Who?

Quoting: rcritWatching your multi-player mayhem on Twitch got me re-engaged in the game a while back :-)

I remember it fondly, some of the most fun I've ever had, amazing game.
0 Likes

Erzfeind 16 May, 2018
View PC info
Would totally buy a Broforce 2 - The Brodemption (or whatevery they would call it :D ) if they ever going to make a sequel.
0 Likes

wojtek88 16 May, 2018
View PC info
Broforce is the only pixel art based game that I consider amazing.
0 Likes

View PC info
I used to have an issue with one gamepad controlling two players - it's a whole new set of challenges for one or two players and can be fun on itself but made it impossible to play on 4 gamepads (2 just wouldn't work). I'll need to check it out again sometime soon, see if its fixed. Will probably update this comment after.
0 Likes
While you're here, please consider supporting GamingOnLinux on: