By Samsai - 16 September 2015 at 1:07 pm UTC | Views: 13,203
AMD have released a new driver for their GPUs and because I happen to own one I decided to do a test run with it by running my standard set of benchmarks to see what improvements, if any, there are.

First of all, Catalyst 15.9 fixes a problem that existed in 15.7 which was the inability to install the driver after a kernel update in Ubuntu 15.04. That means that 15.9 is now installable on such systems without extensive patching. This is definitely a very good thing, since something like a GPU driver shouldn't be a preventing factor for kernel security updates. It apparently still doesn't work with the brand new 4.x series kernels but I'm quite happy with my 3.19 at the moment.

Let's talk about raw performance next. To be entirely honest with you, there isn't really all that much to talk about, as you might see from the following graphs. 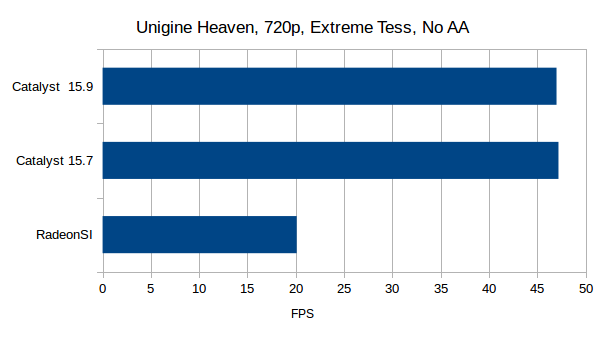 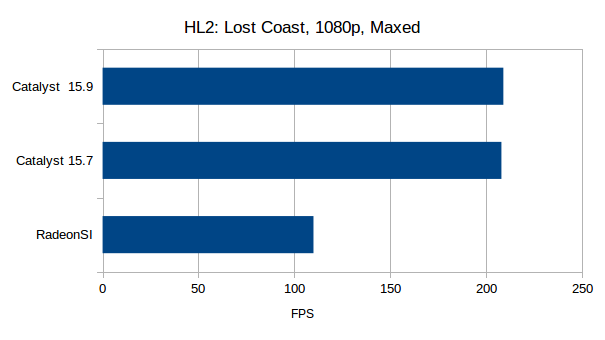 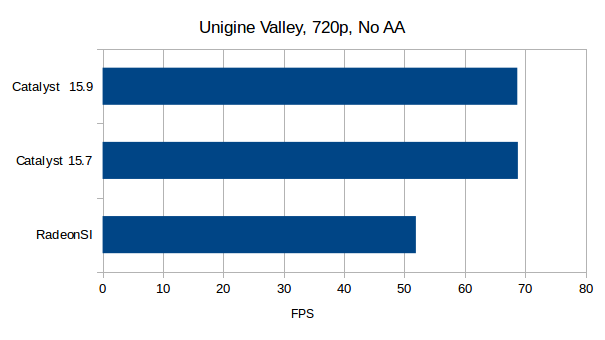 As you can see, 15.9 doesn't really offer any performance improvement in this set of benchmarks. I also ran a Dirt: Showdown test which also saw no improvement in performance. The changelist for 15.9 notes two fixes for Dirt: Showdown, one for corruption and one for a crash, but neither of these changes affected the overall performance. Also, keep in mind that Dirt: Showdown's benchmark mode is not scientifically accurate, since there is always a little bit of a visual variance between runs. 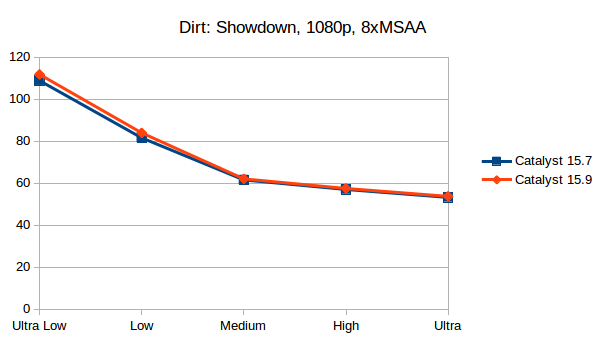 The changelog also mentioned Counter-Strike: Global Offensive. On Catalyst that game has performed relatively poorly (as in, a lot slower than Nvidia blob) and this patch apparently creates an optimization profile for CS:GO. I haven't been able to collect any hard information about CS:GO's performance on 15.7 and I don't have any concrete data now. But a quick Arms Race match on the map Monastery showed a framerate between 80 and 120 FPS.

I also quickly tried Shadow of Mordor and Company of Heroes 2, both of which have been particularly troublesome on AMD. Sadly, neither has improved performance. The patch notes say that COH2 shouldn't crash anymore, but my whole system went down when attempting to run the performance test, so I can't really agree with AMD here. Some Shadow of Mordor corruption has allegedly been fixed but the performance is still as poor as it was previously.

Overall, Catalyst 15.9 doesn't really bring anything too interesting. The most positive thing I can say about it is that it works. The fact that it works can be something quite big for those that are on 15.04 like myself, but don't expect massive performance improvements in anything but possibly CS:GO. Article taken from GamingOnLinux.com.
Tags: Benchmark, Hardware
0 Likes
Share

I'm a Linux gamer from Finland. I like reading, long walks on the beach, dying repeatedly in roguelikes and ripping and tearing in FPS games. I also sometimes write code and sometimes that includes hobbyist game development.
See more from me
Some you may have missed, popular articles from the last month:
The comments on this article are closed.
14 comments
Page: 1/2»

But indeed it looks like they're only fixing very minor stuff.

I really hope that's due to bigger stuff they're working on in parallel.
Vulkan, etc.

View PC info
I tried them out on my Linux Mint 17.2 install, had to go back to Kernel 3.13 to get it running as the Exton ones failed to install headers due to some dkms error that I can't be fcked figuring out.

These work just as good as the 15.200-1 development drivers I was using, ONE THING TO CONSIDER HOWEVER, and that is VSYNC is still pretty broken, if you turn on vsync expect to see on average a 30fps drop in performance for whatever reason.

What I would like AMD to do next is FIX the VSYNC up so the FPS loss is negligible, and also make it so screen tearing doesn't happen (in OpenGL) because with vsync on the fps was ALL over the place from 15-60fps and you could tell there was some draw issues.

Its worth noting that these issues exist for NVIDIA cards also, but I don't believe they murder performance like the AMD VSYNC does, however tearing persists with them on so no point using it.

ungutknut 16 Sep, 2015
View PC info
Wow. This is really disappointing. I wasted hours trying to install the last few issues of fglrx on my secondary pc (gladly changed my primary pc's card for a nvidia) on Xubuntu 14.04 with recent kernel (and had no success eventually)... and now I read that the newes driver again only supports "outdated" kernels. Seems they'll never get it done.

On the other hand - the open source radeon driver is in a really good condition at the moment and I don't feel like I'll ever have to try installing fglrx again (or ever buy amd cards again ^^).

@Samsai: did you use the stable or some bleeding edge radeonsi driver for your benchmark?

@Theriddick: which desktop environment are you using? Probably your Vsync issue is linked to your DE.

View PC info
I was using bleeding edge RadeonSI from Oibaf, so it's built against LLVM 3.6. However, it seems I cannot do so anymore because this new Catalyst knocked out RadeonSI entirely and I will only get a black screen if I try to boot with it. This could be the end of my AMD adventures (at least for RadeonSI). Watch out if you switch between those two drivers.
0 Likes
mao_dze_dun 16 Sep, 2015

Quoting: SamsaiI was using bleeding edge RadeonSI from Oibaf, so it's built against LLVM 3.6. However, it seems I cannot do so anymore because this new Catalyst knocked out RadeonSI entirely and I will only get a black screen if I try to boot with it. This could be the end of my AMD adventures (at least for RadeonSI). Watch out if you switch between those two drivers.

ingmar3 16 Sep, 2015
View PC info
Even it's not a great step in performance I realized that with this driver for me it's now possible to play Realms of Arcania and Cradle. Both didn't work (crashed at start or short after) with the old driver, so I'm really glad now. I'm using Kubuntu 14.04.
0 Likes

I don't mean to be a bother, but can you list out the steps you took to install this PPA and unlock OpenGL 4 support?

I don't mean to be a bother, but can you list out the steps you took to install this PPA and unlock OpenGL 4 support?

Im not using MESA but I think for support OpenGL 4X in main profile you need have installed LLVM 3.7, if you don't have this, OGL 4.1 is support only in Mesa core profile.
0 Likes

Quoting: SabunIm not using MESA but I think for support OpenGL 4X in main profile you need have installed LLVM 3.7, if you don't have this, OGL 4.1 is support only in Mesa core profile.

I do have LLVM 3.7 runtime and toolchain installed. I thought that you also needed to compile Mesa against LLVM 3.7?

I checked the PPA, apparently the packages are only for Ubuntu 14.10 Utopic Unicorn. So, 14.04 and 15.04 AMD users can't use this PPA.
0 Likes
1/2»
While you're here, please consider supporting GamingOnLinux on: