By Liam Dawe - 8 August 2017 at 1:21 pm UTC | Views: 9,518
A new DLC 'mini-expansion' has been announced for Cities: Skylines that will allow you to put on concerts in your city. The DLC is aptly named Cities: Skylines - Concerts DLC [Official Site]. 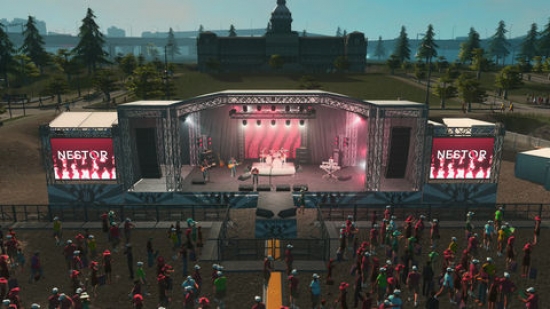 Here's how they described this new DLC:


QuoteWith Concerts, putting on a great show is about more than just the music. From new buildings to host your headliners to festival management options that encourage ticket sales, creating advertising campaigns, driving band popularity, optimizing security budgets and more, Concerts puts players in control of everything from the front of house to backstage.

Concert-focused City Ordinances: Support your festival ambitions with new laws and budget options to promote concerts and monetize the crowds.

The planning of concerts sounds awesome, enabling you to make your city a little more vibrant. This isn't the first musical themed DLC with Relaxation Station and Rock City Radio released previously, but they only added in new radio stations. This has a little more to it, given than you can build a festival area and manage it.

It will be released for £4.99, but they haven't given an exact release date just yet. Article taken from GamingOnLinux.com.
Tags: DLC, Steam, Upcoming
1 Likes
Share

Ah, so the DLC stations you have access to, but not anything else?
0 Likes

But it is true the UI is not really handy to choose them, and you must build a radio antenna first (from natural disasters DLC).
0 Likes

Liam Dawe 8 Aug, 2017
View PC info
Are you absolutely sure about that? Every post I find tells me they should be in the drop-down list, I even just purchased Rock City Radio to test first-hand and don't see it. I only see the initial station the game has by default. It's not stated anywhere I could find that you need to built something in-game to listen to the extra stations?

Edit: Bah, you have to click the icon. Not exactly self explanatory but whatever.

View PC info
They should be better of allowing you using your own music files to play as a radio station with these DLCs. Even better it would be to include a streaming for real radio streams.
0 Likes

Quoting: cRaZy-bisCuiTThey should be better of allowing you using your own music files to play as a radio station with these DLCs. Even better it would be to include a streaming for real radio streams.

At least there is a mod for that https://steamcommunity.com/sharedfiles/filedetails/?id=422934383
0 Likes