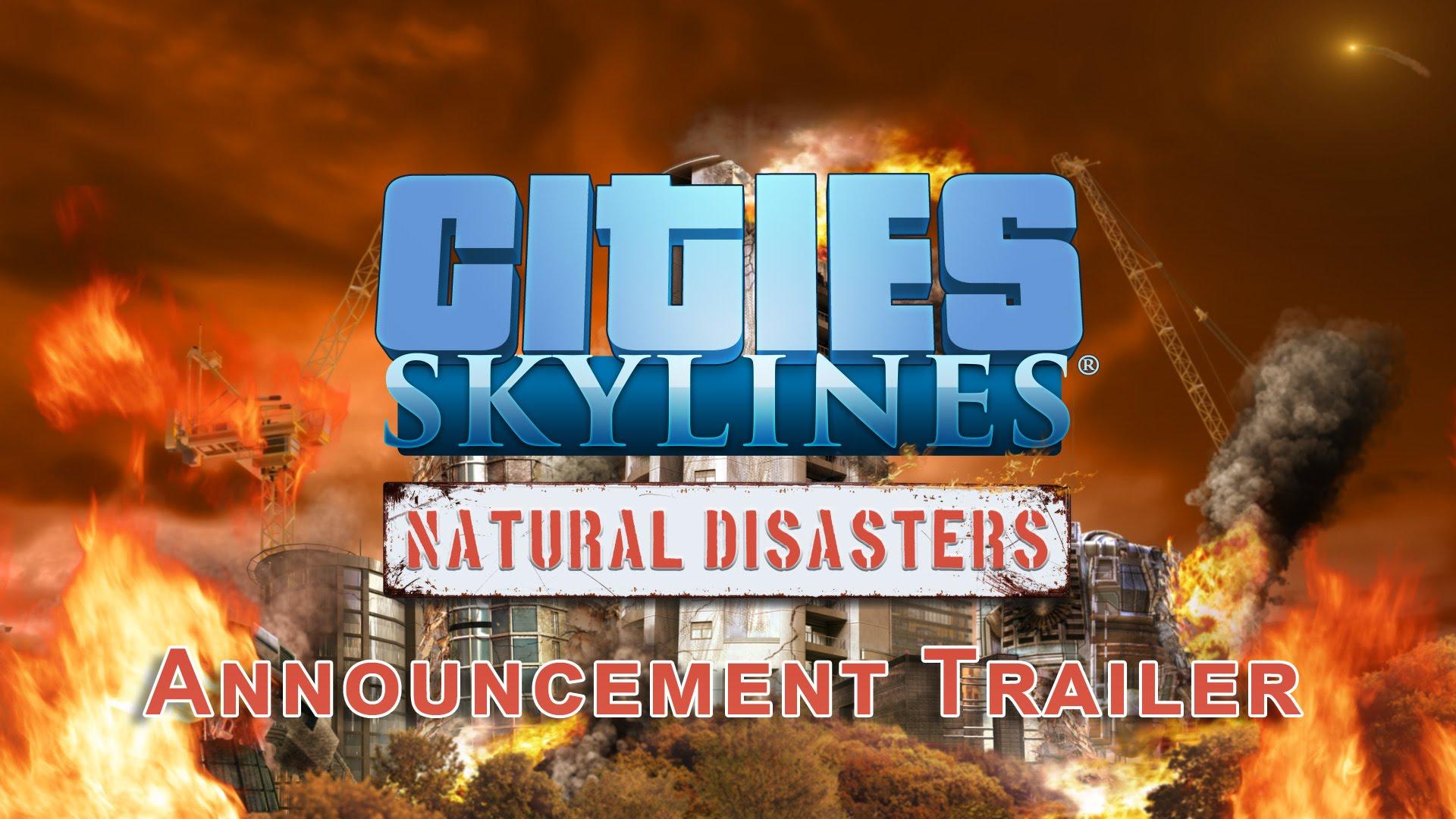 I do love that it's being expanded again, but I hope they do better than the Snowfall expansion which disappointed me somewhat. Having the snow locked to a specific map was quite a letdown.

About the expansion
Natural Disasters will add a series of city-destroying emergencies to Cities: Skylines, which can occur unexpectedly during the game – or be manually triggered by mayors seeking a challenge or some sort of gruesome, vindictive pleasure. Buildings and infrastructure will be destroyed, fire can spread across locations, and countless lives may be lost unless players implement the right emergency plans and responses and keep an ear on the new radio alert system. Fans of Cities: Skylines will have the chance to overcome everything from massive fires to meteor strikes, and allow their friends to do the same with a new Scenario Mode, where custom challenges can be designed and shared through Steam Workshop.

* Deep, Impactful Gameplay: Keep your city going through the devastation of several possible doomsday scenarios, from towering infernos to the day the sky exploded

Mountain Man 18 Aug, 2016
View PC info
Could be interesting, but I suspect most people will use it like they used natural disasters in the SimCity games: save the game, unleash natural disasters and reduce your city to a smoldering ruin, then reload your game and continue playing as normal. As hard as it is to keep a city running in Skylines, I can't see how it would be much fun to have your metropolis randomly destroyed by a meteor or tornado.

Speaking of Cities: Skylines, I wonder when they're going to get the Linux performance issues sorted out?
2 Likes, Who?

Performance issues are related to Unity engine. While it's getting better, progress is slow. I don't think it's Colossal Order's fault.
0 Likes

Performance issues are related to Unity engine. While it's getting better, progress is slow. I don't think it's Colossal Order's fault.

I still think it is their issues, considering I personally tested and livestreamed it before release where it worked far better before a patch seemed to nerf it down. They have still never replied to me on that.
0 Likes

View PC info
Considering that disasters were the last and only thing EA's joke of a city builder had still going over Cities Skylines, adding them doesn't surprise me much. Like you, I am super disappointed with how they implemented the winter features (I still hope they will eventually see the errors of their ways and change it, so we can use them on every map), but this is still one of my favourite games, so I will buy the DLC.
1 Likes, Who?

View PC info
I'm a sucker for Cities: Skylines so I'll buy this for sure. Adding disasters is only natural (pun intended) and something I think most will like, to spice things up. I just hope there will be many kind of disasters, and not just fire-based ones, such as viral epidemics or something that requires more police. Having only natural disasters also sounds a bit limiting - am I the only one who'd like to see plane crashes if you have an airport near urban areas?

About the last DLC, I also hoped for dynamic seasons. As it is now it doesn't really matter, you just have to buy more expensive pipes and deal with snow-dumps. Trams makes a big difference, but everyone got that for free, right? I don't expect a substantial DLC this time either, which in a way is sad. Would be nice if the patch improves the 'cims' intelligence when it comes to public transportation, or issues with too many trains when there are only two incoming/outgoing connections. I don't really feel any performance problems (my largest cities have ~150.000 citizens), but if it can be improved, sure great.
0 Likes

That's actually a cosmetic pet peeve of mine I wish they'd improve. We build cities that look and feel as if they had 5-6 million population, but the games tells you it's 200,000. :S
0 Likes

I'll keep my eye on this. Although I'm concerned about how they are going to handle building damage and such. The workshop assets are what make this game really great. Having the assets themselves be modified to be compatible with the snowfall DLC was a little annoying. Hopefully this DLC won't be set up the same way.
0 Likes

finaldest 19 Aug, 2016
View PC info
This game has taken hundreds of hours away from me so a new expansion pack is good news. I cannot wait to see some actual game play footage.

I have not really suffered performance issues with this game, However I don't run 1000's of mods and I use only traffic related mods. I run a 4770k with 16gb ram and gtx770 and now play CSL exclusively on linux.

Just found out that unity updates will be pushed out into cities skylines once the expansion launches. It was mentioned on paradox forums. This should help improve performance.
0 Likes
Swiftpaw 19 Aug, 2016

View PC info
I too would love to hear if they've finally looked into the performance issues. If they upgraded to a newer version of Unity that might also directly or indirectly help with making the performance bug(s) vanish.
0 Likes
bakgwailo 19 Aug, 2016

Performance issues are related to Unity engine. While it's getting better, progress is slow. I don't think it's Colossal Order's fault.

I still think it is their issues, considering I personally tested and livestreamed it before release where it worked far better before a patch seemed to nerf it down. They have still never replied to me on that.

I think they are using a customize version of Unity, but I wonder what underlying version it is based off of. I know somewhere around 5.3 they apparently did a complete rewrite/overhaul of the OpenGL backend which might help, and 5.4 was supposed to bring multithreaded rendering among other improvements.

Since they are on a customized version though, no idea how hard it would be for them to upgrade the engine, or if they would even be interested in doing so anyways on a kind of older game. Its kind of a shame - definitely the best (modern) city building sim out there.
0 Likes
1/2»
While you're here, please consider supporting GamingOnLinux on: