Clash of Robots is a pretty terrible mobile-port fighting game

The developer of Clash of Robots [Steam] sent over a key to their robot fighting game for me to look at, it's pretty damn terrible. I actually requested the key personally, as I was hoping it would be somewhat okay. I honestly wasn't expecting much, but I like to be surprised. 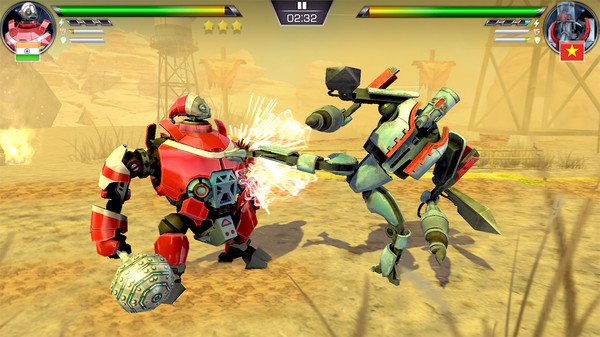 It seems it's keyboard only, with no option to configure a gamepad and the controls are just messy. It feels incredibly clunky, the actual fighting is slow and incredibly awkward and there's a distinct lack of fun. The amount of moves you get are laughably limited too: a basic kick and punch, with a slightly more powerful version (or the equivalent with whatever weapon they have for a hand). Different robots have slightly different styles, but it's all very simple.

You can't duck, you can't jump, blocking hardly every works if the enemy managed to let-off repeated attacks. Then there's the special attack, which literally cannot be stopped and is a guaranteed hit no matter how far away you are. If you do the special, it will just quickly cut to a scene of you right next to them, as you smack them down. It honestly feels like it's made by a developer who has no idea about what makes a fighting game good. The mechanics are just awful.

The menu interface is low resolution, poorly designed and really doesn't work very well. I went through a few settings, but suddenly some daily in-game currency bonus appeared below the current screen making everything a right bloody mess.

It also has micro-transactions in the form of buying gold coins for real money. These gold coins are then used for buying more robots to fight with. You can also upgrade your robots power, health and shield using this in-game currency. That's right, a pay to play fighting game on Steam has a real money shop, to buy the other characters and upgrade them. The most expensive of which being $150! It does give you in-game money as you progress, but for a pay to play PC game this is pathetic.

Guess what? If you want to play multiplayer, you have to power through the first 4 campaign battles and then fork out more of that beautiful in-game currency. The cheapest league being 200 gold coins just to enter, if you don't have enough, it will thrust the real money store in your face. I did try one online game, which surprisingly found a match but the enemy robot was so strong I lasted seconds each round. I assume it's compatible with the mobile version, since Steam told me only 1 player was online (me). I tried a second match, it took my gold and never found a game. I pressed ESC and it returned me to the menu, without my gold, I would be massively pissed off if I spent real money on that. There's also the problem of the upgrade system, since you can spend money and then upgrade your robot, that's pretty pay to win.

Everything about this screams a lazy mobile port. Easily one of the worst fighting games I've ever played, there's absolutely nothing to like about it. Do yourself a favour and give it a miss.

View PC info
WOW
I don't think I've ever seen you give a game a review this bad before Liam.
But if it is just a clunky mobile game with microtransactions up the a** then I guess that might explain it.
2 Likes, Who?

View PC info
Hahaha... oh, boy. When mobile devs attempt to put something on an actual gaming market (no matter if console or PC), it almost automatically goes horribly wrong.

Quoting: razing32WOW
I don't think I've ever seen you give a game a review this bad before Liam.
But if it is just a clunky mobile game with microtransactions up the a** then I guess that might explain it.

View PC info
So the game sucks, but how was the port? Is it native? Did they at least do a decent job there?
0 Likes

Quoting: AnxiousInfusionSo the game sucks, but how was the port? Is it native? Did they at least do a decent job there?

But I assume it's done in Unity.

View PC info
Not since the early days of PC Zone magazine have I seen a review that scathing :-)
0 Likes

View PC info
I could be wrong, but I think Liam didn't like the game very much.
4 Likes, Who?

Quoting: eldersnakeI could be wrong, but I think Liam didn't like the game very much.

Maybe you are right, but i'm not pretty sure. What make you think that?
1 Likes, Who?

View PC info
Micro-transactions on Linux!? (Grabs hat and coat and leaves through the back door). That crap stopped my Android gaming interests very quickly.
1 Likes, Who?

View PC info
Why am I thinking of Rise of the Robots? Fuck that was bad... RotR2 was good though.
0 Likes
While you're here, please consider supporting GamingOnLinux on: