Feral Interactive have pushed out a patch for the Linux version of Company of Heroes 2 which gives it official AMD GPU support. 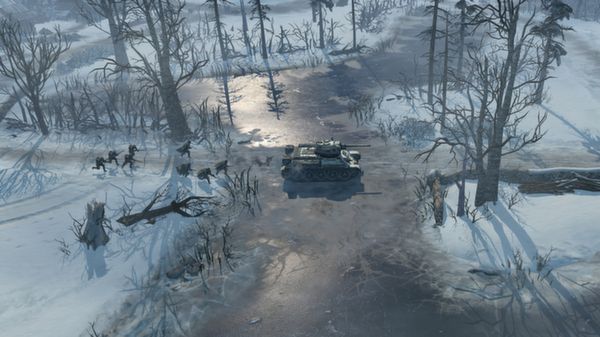 The Linux version actually hadn't seen an update for quite a while, so it's pleasing to see that Feral Interactive are still supporting their older Linux ports. I'm quite a big fan of the game, so it's great to see.

The Mac version has been switched over to Metal, so hopefully Feral will bring CoH2 over to Vulkan for Linux as it does suffer a few performance troubles here and there.

You can grab it from: Humble Store, Feral Store and Steam.

View PC info
Great news! They recently tweeted be that "We are still doing loads of work with Vulkan, and may have some news for you soon…", so hopefully we will see it release with Vulkan support!

View PC info
Never had any problems, but it's nice to not have to see that popup about unsupported graphics every time I launch it :)
0 Likes

Quoting: AzPGreat news! They recently tweeted be that "We are still doing loads of work with Vulkan, and may have some news for you soon…", so hopefully we will see it release with Vulkan support!

If that means revisiting old titles that needs performance upgrade, they're very welcome.
1 Likes, Who?

View PC info
And while they are updating older games, what about Wayland support? GNOME on x.org hasn't even been working for me after x.org 1.20 update earlier this year. I've had lots of problems with games running through xwayland. RotTR for example freezes at the splash screen before I even get to the main menu. Lots of games have huge frame-rate issues when using xwayland. I think the only game that runs well for me right now is Borderlands 2.

Edit; Okay, I just tried CoH2 for the first time in a while and it runs very well through xwayland.

Quoting: GuestWhile this is great news and i like the game do not forget the multiplayer is not compatible with the windows version. Only between MAC and Linux.

A good excuse to help out your friends with dual-boot Windows and Linux on their home computers.

The easiest way would be to add a second hard drive, and install Linux on that one rather than modify the Windows drive. Then, once done, either use the Boot Menu in the BIOS to choose boot-up drive, or modify to boot the Linux drive first. Running "sudo update-grub2" and Linux would usually find the Windows drive and add it to the Grub start-up menu as a boot option, so no more messing with the BIOS.
0 Likes

Quoting: GuestDid that with my beloved father. The sole person i know owning the game. On an external USB drive. Trouble is, while it works with his 9800 GT on windows, it is unplayable on the same hardware on Linux.

Maybe even your "old" graphics card recycled when you do your next upgrade.
1 Likes, Who?

Quoting: GuestDoes this game have a nice single-player mode? I may try it if it does.

It shit,ahistoric it depic the soviet as the baby eater,burning civilian houses and shooting there own men for saving a fucking officier.
here a video that sum is up
https://youtu.be/2m4SCUaBHS8
0 Likes

Especially on Company of Heroes 2, because that runs terrible even on high end hardware.
0 Likes

Quoting: GuestDoes this game have a nice single-player mode? I may try it if it does.

It shit,ahistoric it depic the soviet as the baby eater,burning civilian houses and shooting there own men for saving a fucking officier.
here a video that sum is up
https://youtu.be/2m4SCUaBHS8

It's unfortunate how History gets distorted, am well aware in my home country how a terrorist is viewed amongst the world as a great leader. It's all to be politically correct and seems the world does not take too well to admitting truth. But a game it is and as a game I think it is pretty good. Always good to have some references to real history and be enlightened. Would also be great to call a spade a spade, but in certain countries like where I am, one can be imprisoned and lose everything you own and seen as a racist. This is way off topic, I apologize.

A big thanks to Feral for their on going support and great ports!

if interested, Dr. Jordan Peterson talked about the horrors of Marxism in this 30min video clip ...and it's from this 2h30min video