It’s yet another game I've been highly excited about, and I another I never had a chance to play before. Having it on my favourite platform is fantastic!

Disclosure: Key provided by Feral Interactive, but this will not affect my thoughts, it never does.

Note on expansions: Standalone Expansions like Ardennes Assault and The Western Front Armies will be ported in future, but currently won't work as they are games themselves and need to be ported. I will be personally buying them when they are ported, as I'm loving it.

Multiplayer note: The online multiplayer is Linux->Linux only, no cross-platform multiplayer. They did explain this in more detail here. See below for the rest of the report.

Gameplay video
Here’s me playing horribly as usual! You can see some gameplay from the Skirmish mode, so I don’t spoil any of the campaign for you. I’m still pretty new, so I realise I wasn't doing too well. What I did find extremely fun, was throwing a charge at an enemy occupied building, after which they fled and the building was levelled to the ground—awesome stuff. 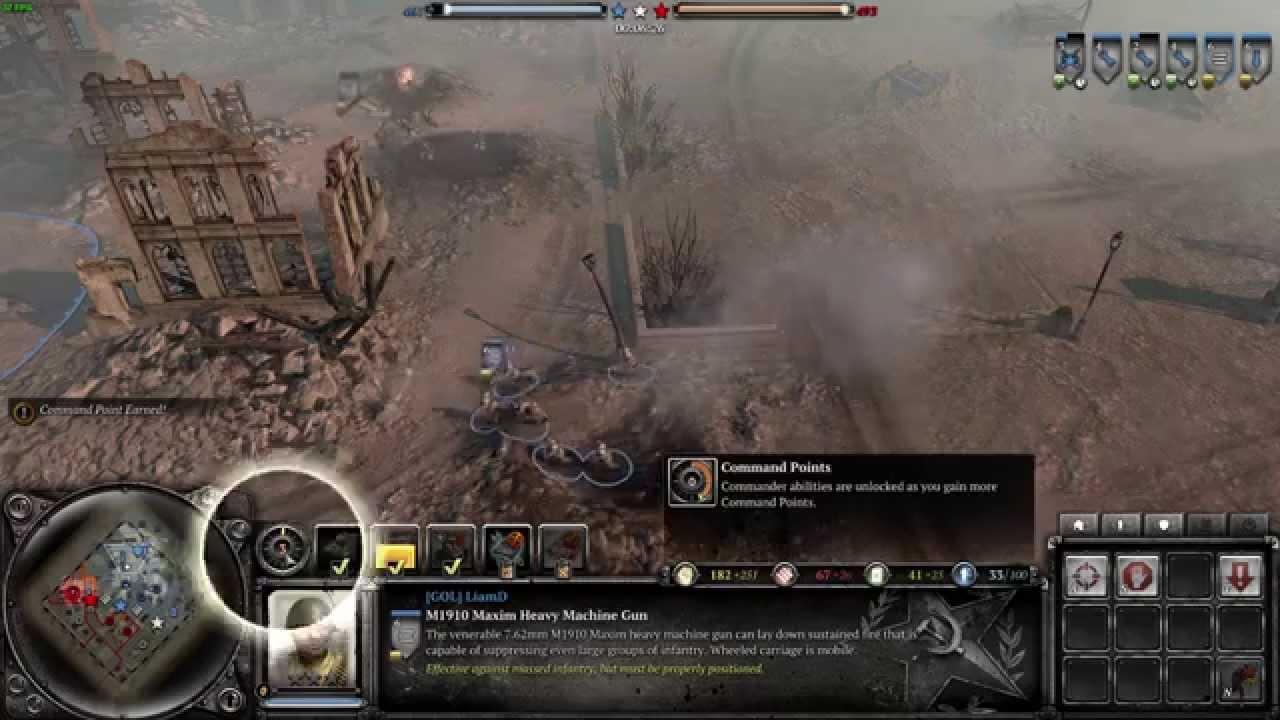 YouTube videos require cookies, you must accept their cookies to view. View cookie preferences.
Accept Cookies & Show   Direct Link
Note: Some music tracks were removed from the video, as we got hit by a copyright claim on the video, I really hate greedy rights holders.

Initial Thoughts
I know I was excited about Shadow of Mordor, but I’m actually finding this game just as damn exciting to play. We have a lot of turn based strategy games, but not a lot of high class traditional real time strategy games like this.

The campaign is exciting that’s for sure, it’s not often I’m completely sucked in right away, but the cutscenes showing the brutalities of war really hook you in. The story seems like it’s done pretty well, and the cutscenes aren’t too long to get in the way of the actual gameplay. The cutscenes are really quite nice though, and have kept my attention completely.

I've been rather enjoying taking out tanks with mines, and laying waste to enemy troops with grenades and flamethrowers. I've had plenty of my own men lay down their lives for their country too though, as I'm apparently the worst commander in the world.

The game has a pretty good cover system, where your soldiers can take cover behind walls, in trenches and behind sandbag covers. It’s a little tricky to get it right, as sometimes a soldier or two can be left standing while the others are in cover. Cover can easily be overcome with the right tactic, like some well placed grenades, molotovs or heavy weaponry. So, everything has a counter in this game, which is great for strategy buffs like me.

I’ve been playing it on Standard difficulty, as I want there to be some sort of challenge, and so far it’s proving to be the right balance for me. I almost got overrun in the second mission, so I think for people new to the game Standard is probably a good fit. The third mission difficulty does get a bit higher, and my first attempt at it had me completely overrun in quite a short time by tanks and armoured vehicles.

I am finding it difficult to manage my various different squads at times, as the minimap doesn’t really help you see the difference types of squads, only your units. I would prefer it if the minimap had icons that correlated with different squads, but that might make it too cluttered, which is why they probably went with simple colours. I kept losing where my anti-tank weaponry was at a glance, so that’s something that’s troubling me so far.

At one point it tells me a certain type of squad can be upgraded with submachine guns, but it doesn’t tell me how. I get really annoyed when games do this, as it creates frustration points for me. Eventually I found a small icon in the middle panel, and this allowed me to upgrade them, but it would have been nice to have an arrow point to it or something like that.

Blowing up tanks, mowing down infantry with heavy machine guns, and blowing up icy paths with TNT is all in a days work.

The ability to play against the AI and others online is going to be fun. I tried a 1on1 against the AI in the Custom Game section, and it worked great. I can see myself enjoying this rather a lot, I can’t wait to play some of you!

Learning curve aside, I think it’s a fantastic game so far, and I’m thoroughly enjoying the campaign.

Port Report
To get this out of the way first: The FPS isn’t the best, but this is a real case of me not even noticing unless I’m staring at the FPS counter. I’m saying that genuinely, as I know you can tell the difference easily in an FPS game, or like we saw with Dying Light, but not here.

Generally in the heat of combat it hovers at just above 30FPS, but it will still remain playable and smooth. Being smooth and playable is the key here, and I’m happy enough with CoH2 right now. You do need to remember this isn’t an FPS where pin point accuracy and super high FPS would always needed, this is a strategy game. Having a high FPS is one thing, a playable and smooth game is different.

The game is smooth though, silky smooth for me. I’ve run up quite a number of hours in the game now and I have found that everything works as expected.

I have played through a bunch of the campaign, and I’m finding it to be much more solid than Shadow of Mordor which did crash a few times for me, but so far CoH2 hasn’t given me a single issue. I don’t often get to say that, so I’m extremely happy about the stability of the game so far.

Benchmarks
Please note, that the CoH2 benchmark mode is a stress test, so in-game will actually be higher. This is noted by the game itself:

It's also highly advisable to quit the game and reload it when changing any graphical options. Or else you will get weird results and performance.

There is no predefined “Ultra, High, Low” for an overall setting, so these are what I picked below.

Remember, the benchmarks are to be taken lightly, as the game will run better since the benchmark is a stress test.

Check out Company of Heroes 2 on Steam. It's got a big sale on the main game too, so now is the time folks!

It also looks like you can try it free for the next three days, so give it a shot! Not 100% sure if that works or not, as I can't test that myself.

The trouble with this release is that I’m now not sure which Feral port I love more. Bring on more games Feral! Article taken from GamingOnLinux.com.
Tags: Benchmark, Initial Thoughts, Steam, Strategy, Video
0 Likes
Share

STiAT 27 Aug, 2015
View PC info
Just bought it ... excited for getting a rts game in Linux. And that really really cheap.
0 Likes

Stupendous Man 27 Aug, 2015
View PC info
I played CoH 1 a bit back when I still used wine, and found it an ok fun game (meaning, not my favourite game but still good). I might buy this one, as the sale is pretty cheap, and I haven't supported Feral since X-Com.
1 Likes, Who?

It's also on sale on Feral Store, with all working DLC too, same price as Steam :
> https://store.feralinteractive.com/en/eu/games/companyofheroes2/
6 Likes, Who?

View PC info
I've hears so many good things about this series. If only I wasn't complete and utter rubbish at RTSs. Oh well.
1 Likes, Who?
Ser Eduardo Mogambro 27 Aug, 2015

Quoting: NelIt's also on sale on Feral Store, with all working DLC too, same price as Steam :
&gt; https://store.feralinteractive.com/en/eu/games/companyofheroes2/

Thank you. I bought it right from there! :)
0 Likes

Quoting: KeyrockI've hears so many good things about this series. If only I wasn't complete and utter rubbish at RTSs. Oh well.

You and me both! I'm really missing a pause button in these games so that I can think and give orders at my leisure.
0 Likes

Quoting: Stupendous ManYou and me both! I'm really missing a pause button in these games so that I can think and give orders at my leisure.

View PC info
Getting pretty low performance on this port. With a GTX 680, even with setting everything to low, it's staying in the 30 fps range and below. Not very impressed with this port, and it seems the numbers should be higher on a 970 as well.

I understand the thinking of lower fps dosen't matter on a rts, but it is noticeable when it drops really low. I also wonder if Virtual Programming would have gotten the same free pass in regards to this that Feral seems to
3 Likes, Who?

Quoting: d10sfanGetting pretty low performance on this port. With a GTX 680, even with setting everything to low, it's staying in the 30 fps range and below. Not very impressed with this port, and it seems the numbers should be higher on a 970 as well.

Please make sure you reboot between changing settings as the engine will not fully reset until you do so. If you have an issue with performance please contact our support with your settings and details and we will investigate.
3 Likes, Who?
1/7»
While you're here, please consider supporting GamingOnLinux on: