Confessing my continued love of the Steam Controller, a few years after release

After picking up my own Steam Controller at midnight from GAME on the day of release back in November of 2015, it has become practically the only gamepad I use. To the point that anything else just feels—wrong. To be clear I own a Logitech F310, a DualShock 4, an Xbox One Controller, I've also extensively used an Xbox 360 pad and so many more.

One of the problems I have with gamepads, is that I often can’t reach multiple buttons at the same time (small hands problems). With the Steam Controller, it’s not much of an issue thanks to the back paddles. Seriously, they’re part of the reason why I love it so much! Take Rocket League as an example, I’ve switched Boost and Slide to the back paddles, so that I can do all sorts of crazy tricks. Before I did that I was honestly terrible at the game. Now though thanks to that? Well, I can do silly things like this:

Another point is the batteries and battery life I wanted to touch on. I rarely have to charge or change batteries, you get a ridiculous amount of life out of it. The fact that batteries aren’t built in, for me, has also been a huge bonus since I never have to worry about it fully dying due to a dead built-in battery. In the time I’ve owned a PlayStation 4, I’ve gone through three DualShock 4’s due to the battery in it just completely dying and no longer charging.

What’s also great about it, is that for games that don’t directly support it and for those times you perhaps want to use it with some sort of media centre PC, SC Controller comes to the rescue. I actually have two, my second one is attached to my TV PC which runs Kubuntu and I have it set to load SC Controller on boot so I can instantly use the Steam Controller to load up anything I want from streaming services in the browser, to games as I can happily flick the mode from desktop to gamepad at the touch of a button with SC Controller’s built-in overlay for switching configs.

Thankfully, support for the Steam Controller has improved dramatically in the last year and it’s now reasonably rare for games not to support it.

Sadly, after a good few years of constant use, the left stick on the Steam Controller has worn down quite a lot. The left side of the stick is noticeably worn out and the right side of the stick has a dip in it of material missing. Thankfully, protective covers for the stick of the Steam Controller that are designed for other gamepads seem to fit quite well. For those interested, I picked up a bunch of Silicone thumb grips from eBay (specifically these) and it’s a perfect fit: 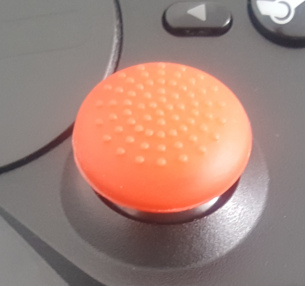 I’m hoping Valve decide to do a second generation of the Steam Controller, there’s a lot of ways they could improve it still. For starters, they could probably shrink the size just a little, it’s a bit large honestly. Not much, but a really-small shrinkage which probably make it a perfect size as it’s so close. The battery compartment, it’s a bit of a nuisance. Some batteries are a tiny bit thicker than others, making them incredibly difficult to get out so I would also love to see some improvements there too.

After enjoying mine so much, I would happily wait in line again if a next generation Steam Controller comes along. Back paddles, wireless with batteries you can replace and the amount of configuration you can do with it and more make it such a good choice. Considering the price of it, it’s quite ridiculous compared to some alternatives with comparable features.

You can grab a Steam Controller from Steam and other online stores.

View PC info
I put a stick extender on mine because I have long fingers. I cut my proverbial teeth on Borderlands 2. Before the Steam Controller, I had to be content with missing loads of what should be simple shots, due to my incessant tremors in the right arm. With the Steam Controller, I can simply hold the device and aim with my right thumb. I rock my right thumb in-place for fine-tuned aiming, and I disable aim assist.

This thing is a godsend.
5 Likes, Who?

View PC info
Another great thing is that it works perfectly with a generic mini-USB cable. If your batteries ran out you can switch to the cable and continue playing.
6 Likes, Who?

It's hilarious to think I never realise that if they run out during a Rocket League game, will have to keep one handy...
2 Likes, Who?

It's hilarious to think I never realise that if they run out during a Rocket League game, will have to keep one handy...

Might not be that simple though. My controller turned off due to inactivity in some games (I left the game running and went away for a while) and when I turned it back on the game didn't recognize it so I had to restart it. I don't think it would be the same with every game but some engines might lose the controller device and don't "reopen" it if it disappears.

At least once it happened in Rise of the Tomb Raider, my batteries were pretty low and the controller lost the signal so I had to kill the game even after it was back online.
0 Likes

View PC info
I switched from a Steam Controller to an Xbox One controller a few months ago.
The right "mouse pad" is simply the wrong choice for a great deal of games, not even talking about the lack of support for it (many just treat it like an analog stick, which obviously won't work).
And the flat d-pad just doesn't give you the same, clear 4-direction feeling that a proper d-pad does.

One thing that amazed me however, is the extreme battery life. I seriously cannot remember ever having switched batteries in my Steam Controller.
0 Likes

View PC info
I love it. Been using it to play Vampire Bloodlines recently which it works well for, but it really excels with other types of games. I haven't touched my xbox controller since i got it.
0 Likes

View PC info
I am completely convinced by this gamepad, nice to use, more programmable buttons than a xbox360, a bank of profiles online, great autonomy ... I even buy a second for my guests. I just hope Steam will continue to offer this product to sell.

View PC info
After literally thousands of hours of use, the hook on the battery door on one of my Steam Controllers broke. I ordered a new one from Steam and it arrived in less than a week. $10. Done and fixed.

I pre-ordered my first Steam Controller, so I got it in the Fall of 2014, and I have used absolutely nothing else ever since.

In 2016 I switched over to using Kozec's SC-Controller user-space driver and, like the Steam Controller itself, I have used nothing else ever since. Compared to the Steam provided driver, SC-Controller is rock solid stable. It's more dependable, powerful, and adaptable. Really. Proof, to me, that once again, open-source triumphs over proprietary. ;)

In the event that there ever is a Steam Controller 2.0, I wouldn't really want much to change, actually; just some tweaks:

I just want an updated version with SteamVR trackers, so that it can be seen in VR. That would be very very neat.
0 Likes

View PC info
I tried the steam controller as well, but playing third person games or shooters is impossible with it. The aiming is so weird/awkward/imprecise.

Sure, maybe after many many many hours of practice I might be good at it, but I don't want to suck at games for a long period of time before I can enjoy it.

I read online that aiming should be done with the gyro but that means moving my wrists in weird angles. Gaming is meant to be relaxing and the steam controller is just frustrating to use.

But I do applaud the people that manage to go through the transitional period.
1 Likes, Who?
1/3»
While you're here, please consider supporting GamingOnLinux on: