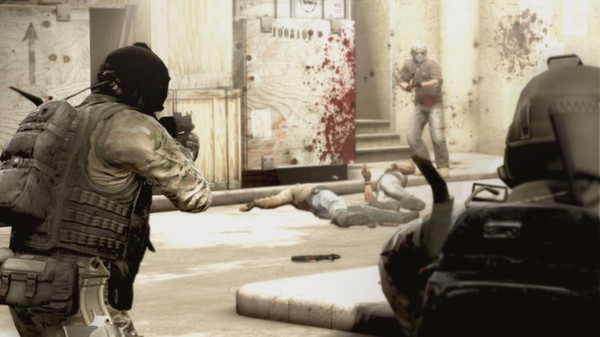 Counter-Strike: Global Offensive looks like it will finally enter beta for Linux soon thanks to information from SteamDB.

Then more was added:

Info above just added to the SteamDB entry for CSGO

We already knew the CS: GO developers were gearing up for Linux from their recent blog post, but we didn't think it would be this soon!

We have been waiting a while on this one, so I expect you all to play lots of it and tell us how it is once it is released. To be clear it is not yet out, but it hopefully will be soon.

Official About
Counter-Strike: Global Offensive (CS: GO) will expand upon the team-based action gameplay that it pioneered when it was launched 12 years ago.

It's the only game that I bought and couldn't play it yet because I have no Windows station.

*Edit:
The game looks great but WASD is not working so I just stand there and shoot what comes around. The toons are moving without any form of animations. They are just sliding from one place to the other. Really weird looking!
0 Likes

Yep! sure is, finally purchased this and installing now. W00t! military shootem up on linux!

NOOOOOO!!!!
0 Likes
novemberist 22 Sep, 2014
Don't care much about CS:GO personally, but waiting for Insurgency to follow soon hopefully.
1 Likes, Who?

View PC info
One thing I noticed.... this game has no "[BETA]" or something like that on my library.... does it mean the "beta" stage is already gone fast like that or what?

Edit: Well, nevermind, I don't think a Valve game would leave beta without an executable :D
But ain't curious that this game doesn't have the "classic" "[BETA]", through?
0 Likes

You probably need to get into the beta. It's usually a code you put in the games properties. When Hotline Miami was in beta on Linux you had to just enter a few letter code (hl, hm, hlm) Something like that. You might be able to find the code for it on the community page.

Or they haven't started the beta yet and are putting it up early is all :P
0 Likes

Quoting: MetallinatusOne thing I noticed.... this game has no "[BETA]" or something like that on my library.... does it mean the "beta" stage is already gone fast like that or what?

On steamdb all of the depots (win, mac and linux) are all labeled as beta. They executable depot for linux is marked "Encrypted" so it looks like there may be a closed beta for linux first. Just a guess though, it may just be a staging thing.
0 Likes

View PC info
They have now added an app config, but the binary is still encrypted.
0 Likes
1/6»
While you're here, please consider supporting GamingOnLinux on: