In JYDGE [Steam] you build your cybernetic arm of the law and eradicate crime. Here’s my review.

Send in, the JYDGE.

I said in my initial announcement when confirming it was coming to Linux, that it looked like it had elements from their previous game Neon Chrome. As it turns out, ‘JYDGE’ is actually based on it. Not only that, but in terms of gameplay it does also feel quite a lot like Time Recoil as well. That’s not a bad thing, since they’re fun, but 10tons Ltd do have a bit of a problem with multiple titles feeling so familiar. 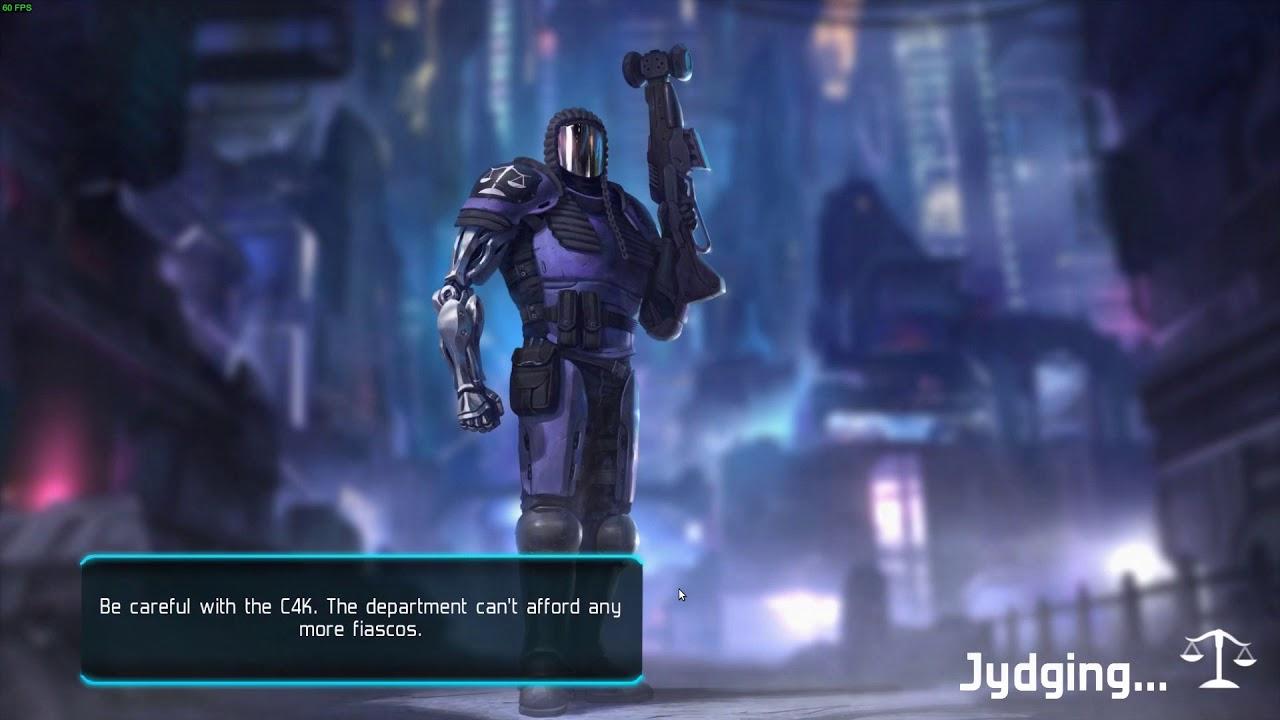 You’re tasked with taking down crime in the megacity Edenbyrg, with a customizable arsenal and powerful upgrades at your disposal there’s certainly a lot to appreciate here. Much like the weapon of Judge Dredd from the original film when he tells his gun to switch fire modes, JYDGE also has multiple modes of fire for your weapon.

Will you choose to go in with a shotgun, plasma bolts, or maybe a heavy laser? There’s a lot of possibilities to unlock and each can be upgraded to be even more powerful. On top of that, there’s also the customizable limited-use alternate fire, like rockets, or a slow moving orb of energy that shocks everyone in its path.

Then there’s also the character upgrades in the form of “Cyberware” you can get, like more armour or even get a drone called Liam, what more do you need? You can have four Cyberware active in total, but it’s quite costly to unlock all four slots. JYDGE is clever in its use of these enhancements too, not all of them are destructive. One of them pulls the camera back some more, to give you a better view of the map for example.

Thanks to the vast array of customizations, there’s so much to enjoy in the game. However, some weapons can come with a bit of a drawback. The heavy laser for example bounces off walls and I’ve accidentally murdered a few hostages thanks to that—woops.

The environment is destructible too, which is especially funny when you dodge an enemy rocket, to see it blow up a wall and their friends behind it. It also means you don’t need to take the set path of the level, you can blow your way through some walls and make your own way around. 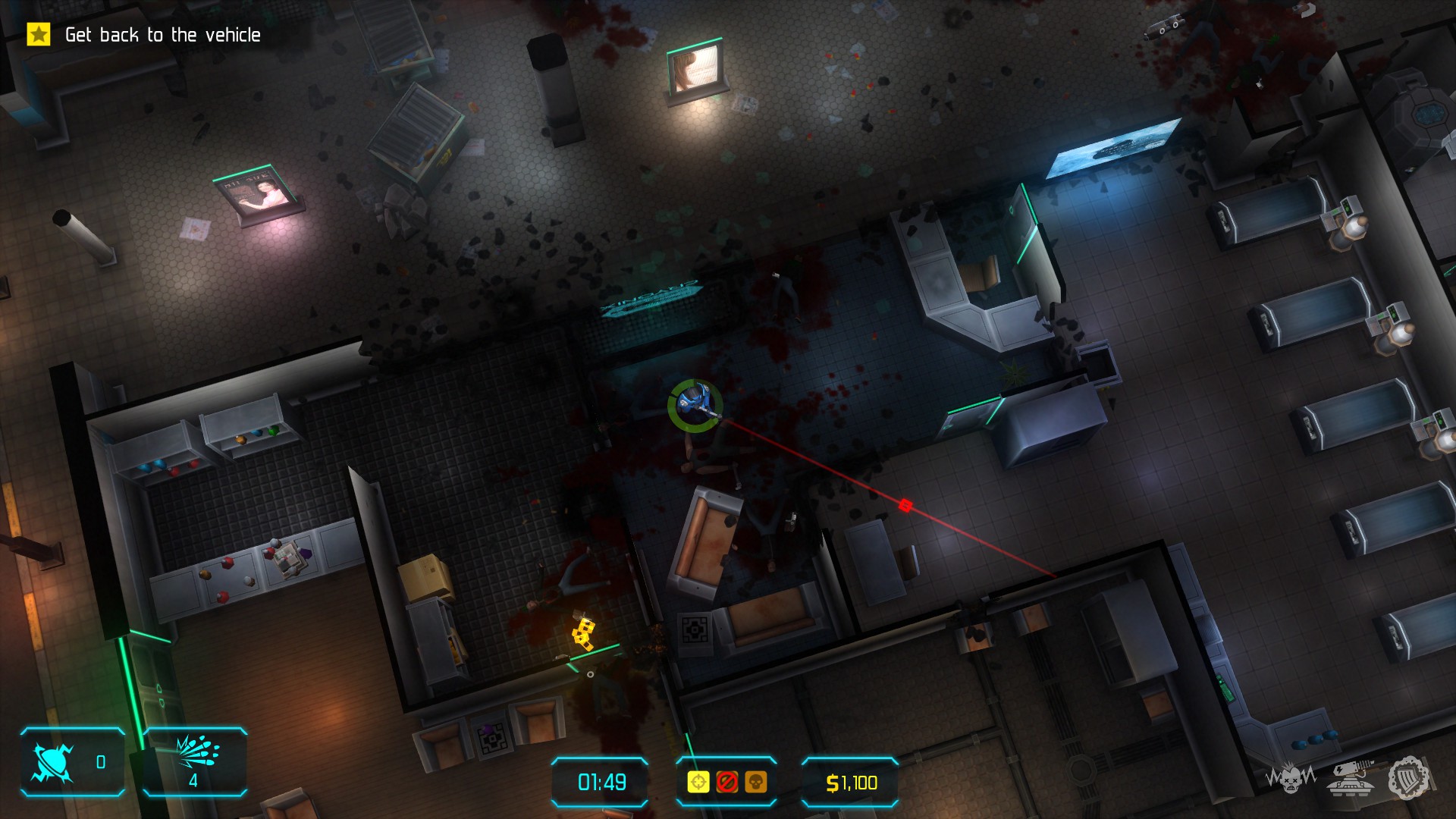 The music — wow! It’s incredible. Some of it’s heavy and really in your face, while some of it’s incredibly funky and futuristic. There’s a surprising amount of variety in the music, which really compliments the frantic gameplay rather well. I often find indie games have repetitive music, but here it’s a delight.

I wouldn’t say it was all that difficult, in fact a few parts of it are far too easy. Thankfully, when you finish the first act you unlock Hardcore difficulty. What I love about unlocking that, is that you don’t have to start again or change anything. When you pick a mission, you simply pick which difficulty to go in on, which is a damn fine way to do it. Hardcore difficulty does make the game more enjoyable, so I do suggest trying that out too.

Quite amusing that when you fail a mission, instead of the usual “You Failed” the title is “MISTRIAL”. It’s so very minor, but it was amusing nonetheless. Little details like that I really appreciate.

Overall, I think it's an absolutely fantastic game.

Now go and spread Jystice to all! You can find JYDGE on Steam.

I am the owner of GamingOnLinux. After discovering Linux back in the days of Mandrake in 2003, I constantly came back to check on the progress of Linux until Ubuntu appeared on the scene and it helped me to really love it. You can reach me easily by emailing GamingOnLinux directly.
See more from me
Some you may have missed, popular articles from the last month:
The comments on this article are closed.
3 comments
hurt138 11 Oct, 2017

I have been looking for something "Dead Nation" like for Linux, and this might just be the game.
0 Likes

View PC info
Bought it and worth the money. Really like the style and that you can grind money if you have a hard time :P
1 Likes, Who?

View PC info
Purchased on a whim, enjoying every minute of it.
1 Likes, Who?
While you're here, please consider supporting GamingOnLinux on: