Dambuster reconfirm Linux is planned for Homefront: The Revolution, after Windows

It's always good to get things reconfirmed near the main release. Dambuster has confirmed Linux gamers haven't been forgotten about for Homefront: The Revolution. 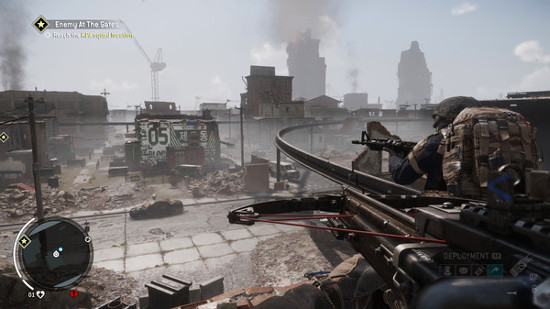 If you read GOL often, you would have already known that Homefront: The Revolution was coming to Linux. It was originally planned to be a day-1 release, but then it wasn't so clear and now it seems for sure it's not until after the initial release.

I'm quite sad it's now for sure not a day-1 release, but also very glad the developer directly seems committed to a Linux version.

I still think day-1 releases are one of the keys to Linux/SteamOS success, but I will take a wait over no port of course. I just hope it doesn't turn into "one of those" where we end up waiting, seeing a delay, more delays and so on which happens often for us.

I'm looking forward to it a lot, are you?

About the game (From Steam)

Homefront: The Revolution is an open-world first person shooter where you must lead the Resistance movement in guerrilla warfare against a superior military force.

And the single player campaign is just the start – in Co-Op you and your friends can form your own Resistance Cell and become renowned as Heroes of the Revolution.

N30N 14 Apr, 2016
View PC info
Generic looking shooter. I'll only pick it up if friends wants to play it co-op, the delayed release is going to make that less likely to correlate. The high price will surely have many waiting for a sale though.
1 Likes, Who?

View PC info
^^ As much as I personally dislike the genre, generic military dudebro shooters are severely lacking on Linux. This is a welcome addition.
1 Likes, Who?

View PC info
Sucks it won't be day-1, but it's nice to see communication and a confirmation that they are still bringing this to the penguin. The optimist in me hopes the delay will allow for Vulkan support. The pessimist in me remembers that CryEngine only got DX12 support about a month ago and DX12 has almost a year headstart on Vulkan.

Anyway, once this comes out for the penguin I'll likely scoop it up, given it reviews well.
0 Likes

View PC info
This looks like it could draw me in, the graphics look great, if the gameplay and story are captivating I would love to have freshly baked 2016 AAA games, my wallet on the other hand advises I keep my senses ha :P, we'll see which one of us wins out.
1 Likes, Who?
TheRiddick 15 Apr, 2016

View PC info
Really I don't mind these games coming to Linux, be nice if COD and other such games came to Linux also (officially) because the more people we get using Linux the more effort will go into porting games over and making it a more enjoyable platform.

Linux still gets hugely trashed today for not having enough users to be viable, being way too hard to use etc etc....
0 Likes

Saladien 18 Apr, 2016
View PC info
Mixed feeling about this one, but i will buy it to show support for the Platform(unless its a buggy mess).
0 Likes

View PC info
i will buy to support linux os. and prolly will play this out over first game.
0 Likes


Last edited by KuJo on 10 February 2017 at 7:44 am UTC
0 Likes
While you're here, please consider supporting GamingOnLinux on: