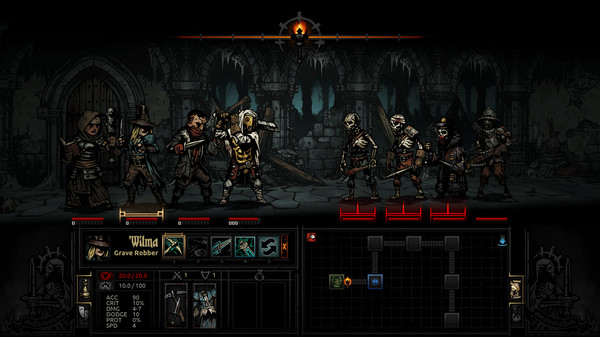 Darkest Dungeon is a brutal game and I did enjoy what I tested of it. The Linux version should now feel a lot better too.

The Linux version should be more stable and perform better thanks to this patch.

Have you guys been enjoying it? You can see my previous thoughts on it here.

About the game
Darkest Dungeon is a challenging gothic roguelike turn-based RPG about the psychological stresses of adventuring.

Recruit, train, and lead a team of flawed heroes through twisted forests, forgotten warrens, ruined crypts, and beyond. You'll battle not only unimaginable foes, but stress, famine, disease, and the ever-encroaching dark. Uncover strange mysteries, and pit the heroes against an array of fearsome monsters with an innovative strategic turn-based combat system. Article taken from GamingOnLinux.com.
Tags: Indie Game, Roguelike, RPG, Steam, Strategy
0 Likes
We do often include affiliate links to earn us some pennies. We are currently affiliated with GOG and Humble Store. See more here.
About the author - Liam Dawe

View PC info
Glad the dev is still improving this game Linux-wise. With RPG's being first, Roguelikes are my 2nd most favorite type of games. Will pick this up when I can spare the money. Thanks for the news Liam.
0 Likes

View PC info
One of these days I'll get around to playing this... maybe.
0 Likes

View PC info
This is great! Well done to the developer for his support, and my hard earned cash. Great fun game.
0 Likes

View PC info
Been playing the hell out of this for the past few weeks. Hadn't encountered any bugs but I'm glad they're still working on it.
0 Likes

Nor Mantis 19 Jul, 2016
View PC info
This game has me hooked, dumped a ton of hours into it. I also have not had any issues running it on Linux.
0 Likes
TheGZeus 19 Jul, 2016
Is it as luck-based as many of the reviews say?
If so, I think I'll give it a pass. I can throw dice all alone already.
0 Likes

Nor Mantis 19 Jul, 2016
View PC info
There is RNG yes, probably more than most games. But if you approach each dungeon run with care, fine tune your team, and don't be afraid of running away and failing a dungeon. You can mitigate the risk. The game has an awesome level of tension and push your luck. I have lost a ton of team members and failed a bunch of dungeons but the game carries on.

View PC info
this was (is) my favourite game from the last year of linux ports. If you like turn-based strategy and roguelikes you can't miss it. IMO the combat is less RNG-based than XCOM (which I also love); a few misses in a row in Darkest Dungeon doesn't end up with a wipe as often as it can in XCOM.
0 Likes
Gnurfos 19 Jul, 2016
Enjoying it too, and hadn't noticed any problem so far either. It runs more smoothly and feels more polished than any other game.

In my book "compilation errors" prevent you from delivering running software, so it's cool they fixed that :)
0 Likes

View PC info
I was thinking the same about the "compiler errors", that is a bit weird :D Maybe he ment compiler warnings, as the often go ignored by developers, most notably "conversion from float to int, possible loss of data" ;)

Very good to see a developer still caring about Linux after the release, that is not found everyday. This earned my trust for buying this game. Didn't pick it up yet, but now that Undertale is gone from the no. 1 spot on my wishlist, Darkest Dungeon sits on top waiting until the next sale.
0 Likes
1/2»
While you're here, please consider supporting GamingOnLinux on: