Darksiders For Linux Has A Slight Delay As Bugs Are Found 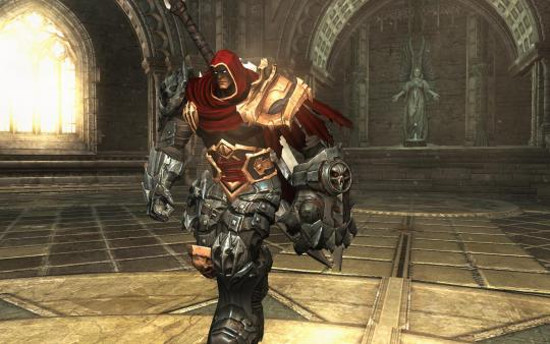 The developer porting Darksiders to Linux has sent word out to all Linux gamers waiting patiently that it hit a slight delay.

Everyone waiting for @darksiders #Linux – apologies for the delays, QA people flushed some more bugs out of their holes, gotta squash them!

Good to see the Q&A team do their jobs, and here's to hoping we have a polished experience on Linux!

Are you as excited as we are? We bet you are you lovely people. We are still riding the hype train right now as it's a great game to have on Linux. We hope Darksiders 2 won't be too far after it, as that's confirmed to be heading to Linux too.

Official About
Deceived by the forces of evil into prematurely bringing about the end of the world, War – the first Horseman of the Apocalypse – stands accused of breaking the sacred law by inciting a war between Heaven and Hell. In the slaughter that ensued, the demonic forces defeated the heavenly hosts and laid claim to the Earth.

Hunted by a vengeful group of Angels, War must take on the forces of Hell, forge uneasy alliances with the very demons he hunts, and journey across the ravaged remains of the Earth on his quest for vengeance and vindication.

We do often include affiliate links to earn us some pennies. We are currently affiliated with GOG and Humble Store. See more here.
About the author - Liam Dawe
I am the owner of GamingOnLinux. After discovering Linux back in the days of Mandrake in 2003, I constantly came back to check on the progress of Linux until Ubuntu appeared on the scene and it helped me to really love it. You can reach me easily by emailing GamingOnLinux directly.
See more from me
Some you may have missed, popular articles from the last month:
The comments on this article are closed.
12 comments
Page: 1/2»
Skully 19 Sep, 2014
Isn't this the same guy who did the Deadfall adventures and Painkiller HD ports? Pretty sure it is. I hope people don't have to wait 5mins every game launch to compile shaders.

Maybe he should ask Icculus how to ship games without needing the shaders to be compiled every time you play. None of the ports from Icculus have this problem at all.
0 Likes
GoCorinthians 19 Sep, 2014
View PC info
Its ok. Take ur time...
0 Likes
FutureSuture 19 Sep, 2014

View PC info
The delay is to improve the game so I certainly do not mind. Keep at it!
0 Likes

Quoting: SkullyIsn't this the same guy who did the Deadfall adventures and Painkiller HD ports? Pretty sure it is. I hope people don't have to wait 5mins every game launch to compile shaders.

Maybe he should ask Icculus how to ship games without needing the shaders to be compiled every time you play. None of the ports from Icculus have this problem at all.

They use less shaders than Painkiller or Deadfall and regardless of who does the port this is an Unreal 3 engine thing.
For example just to reach the menu Dungeon Defenders needs 4MB of shaders to be compiled, Sanctum2 5MB, Papo&Yo 1.7MB, Goat Sim 5.7MB, XCOM 3MB.

In contrast, Painkiller needs 35MB and Deadfall 76MB.
1 Likes, Who?
dsngjoe 19 Sep, 2014
Its ok your making the experience better once we get our hands on it. We appreciate the update.
1 Likes, Who?

Segata Sanshiro 19 Sep, 2014
View PC info
Delays don't bother me and it's great that they're keeping people posted (wish more devs would do the same). Much better this than pushing out a buggy game.
1 Likes, Who?

View PC info
Now this is how you do it. Right the first time. I always say even though some will get upset over a delay, it's nothing compared to EVERYONE being completely pissed at you for releasing a broken one.

Something nice and refreshing after so much bad news this week.
0 Likes

View PC info
loved his other ports, will love this one too I imagine.
0 Likes

Nyamiou 20 Sep, 2014
For me it's okay for a game to have some bugs (even known bugs) at the time of release but that should only be bugs that you won't see if you aren't particularly looking for them or cases where the development team did not except a player to do something (because most player won't). If a bug don't fall in these category or if a bug crash the game (even if this is a rare case), the game should not be released as it is and should be fixed before release.
0 Likes

View PC info
Are there any new about this game?
0 Likes
1/2»
While you're here, please consider supporting GamingOnLinux on: