Darksiders Linux Port Looks Like It Is Still Happening 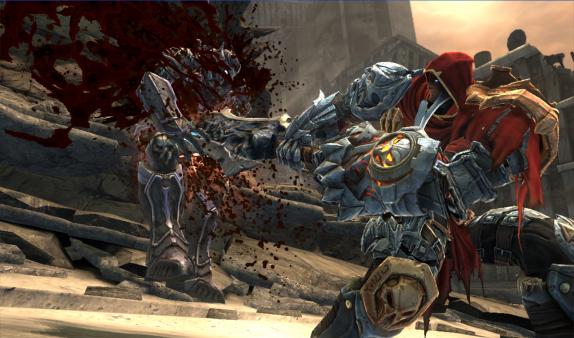 Darksiders is another big game we are excited about, and sadly the current people in charge of the port haven't replied to our messages, but thanks to SteamDB we can see it's still happening.

In the last week alone Darksiders has had two new private Linux builds, and one of them was even today!

We have no idea if/when the release will happen, but the activity is a very good sign that someone is still working away at it. Hopefully the bugs that plagued the original porter are getting fixed.

About Darksiders (From Steam)
Deceived by the forces of evil into prematurely bringing about the end of the world, War – the first Horseman of the Apocalypse – stands accused of breaking the sacred law by inciting a war between Heaven and Hell. In the slaughter that ensued, the demonic forces defeated the heavenly hosts and laid claim to the Earth.

Hunted by a vengeful group of Angels, War must take on the forces of Hell, forge uneasy alliances with the very demons he hunts, and journey across the ravaged remains of the Earth on his quest for vengeance and vindication. Article taken from GamingOnLinux.com.
Tags: Action, Steam, Upcoming
0 Likes
Share

We do often include affiliate links to earn us some pennies. We are currently affiliated with GOG and Humble Store. See more here.
About the author - Liam Dawe
I am the owner of GamingOnLinux. After discovering Linux back in the days of Mandrake in 2003, I constantly came back to check on the progress of Linux until Ubuntu appeared on the scene and it helped me to really love it. You can reach me easily by emailing GamingOnLinux directly.
See more from me
Some you may have missed, popular articles from the last month:
The comments on this article are closed.
11 comments
Page: 1/2»
Interzeroid 28 Jan, 2015

I am waiting. I has both games. I hope, they`ll port games soon
0 Likes

View PC info
I never heard of this game but now, I want to play it on my Linux!
0 Likes

View PC info
I played it in windows two years ago and I would like to replay it again. Darksiders is a very good game
0 Likes

View PC info
I don't think I enjoyed it much on console, but if the port's good I'd love to give it another shot. But while we're talking about games that are still coming... ;)
0 Likes

I am definitely too much of a coward to be playing Outlast. Even the trailer is enough to scare me.
0 Likes

Wow, lots of Linux activity on Outlast. I'm terrified by these games, but fall for them every time. If that comes out, I'm gonna have to play it. (during the day, with the sound low, one eye closed...)
0 Likes

malevolent 28 Jan, 2015
View PC info
I'm also waiting for Outlast to see the light, but Darksiders will be a must in my game library as well
0 Likes
FutureSuture 28 Jan, 2015

View PC info
I'll buy this for myself and a friend at full price, provided that it is a good port. Never owned or played Darksiders.
0 Likes

View PC info
Darksiders is a treat. Once you get past the combat-heavy intro, it turns into Zelda-for-adults. Too bad the sequel didn't live up to the original. It was still a good game, just it felt totally different to me. The loot system was annoying and it felt more like Prince of Persia and God of War than Zelda, only not as good as any of them.
0 Likes
FutureSuture 29 Jan, 2015

View PC info
I just had a thought. With the amount of delays this has seen, surely it will be quite a polished port, right? Surely it won't release as a buggy mess like Dying Light and The Witcher 2: Assassins of Kings did, right? Surely... :S:
0 Likes
1/2»
While you're here, please consider supporting GamingOnLinux on: