It seems Relic won't be putting out anymore content for Dawn of War III [Steam] as it hasn't sold well enough to continue. 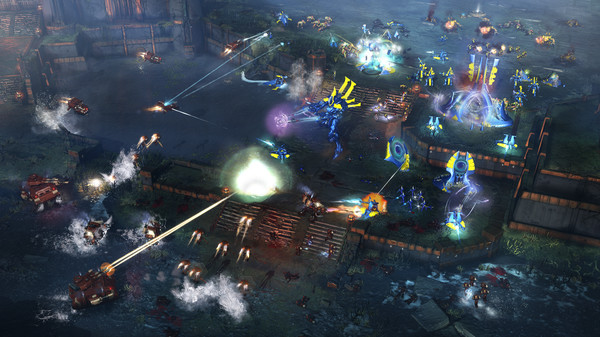 Speaking to Eurogamer, Relic said this:

While Dawn of War 3 has a dedicated player base, it didn't hit the targets we were expecting at launch, and it hasn't performed the way we had hoped since. It's been tough for us as professionals who want to make great games for our players, and for us as people who care a lot about what we do.

When a game underperforms, plans need to change. With Dawn of War 3, we simply don't have the foundation we need to produce major content. We're working in close partnership with Sega and Games Workshop to determine the best course of action, while shifting focus to other projects within our portfolio.

This has caused the game to have a spike in negative reviews, with the recent overall score being "Mostly Negative" which will pretty much solidify the position of poor sales now.

Dawn of War III was a very different game to the previous incarnation, which I've seen many people unhappy with. I'm surprised Relic didn't see this coming, with them forcing players to play a MOBA-style map in the online play. In my own review I said "Honestly, the multiplayer mode is like they gathered a list of features from a bunch of games, threw them up in the air and put in whatever landed face-up, it’s such an odd mix." and I stand by that. They did later add in a more traditional mode, but it was already too late by then as the damage to fans expectations had already been done and it's hard to bring people back to a game if they weren't a fan at release.

Likely a bit of a blow for Feral Interactive too, who ported the game to Linux not too long ago. Hopefully future ports from Feral will do better!

Article taken from GamingOnLinux.com.
Tags: Feral Interactive, Steam, Strategy
5 Likes, Who?
We do often include affiliate links to earn us some pennies. We are currently affiliated with GOG, Humble Store and Paradox Interactive. See more here.
About the author - Liam Dawe

I bought it only for the campaign. Even that was not good, every mission was like MOBA game on it's own. I hoped for something more like first DOW or second. At least the story was fine.

gojul 12 Feb, 2018
View PC info
Frankly I found the various campaigns of DoW 2 to be far better than the one of DoW 3. The second episode is clearly real time tactic (just like CoH actually, except that you don't have anything to build) but the third one is some kind of undepictable stuff, quite boring...
1 Likes, Who?

View PC info
I played a couple of games with some russian using mac and it was quite fun. The AI is very hard in hard difficulty and it's really a challenge ^^. Otherwise I liked the overall design of the game and units, the graphics are good but it's heavy on the gpu. Otherwise I also liked the campaign despite feeling a bit empty.

The shame is that they are now working on age of empires 4 which will be a windows 10 exclusive title...

View PC info
Maybe they can go back to making a Homeworld3 now (although I guess that IP belongs to Gearbox now?).

IMHO Relic makes great games and bad sequels. Homeworld2 and DoW2 being notable exceptions. Still quite unhappy about how bad CoH2 was.

But not good news for Feral I guess... after the sales disaster that CoH2 most likely also was, I doubt they will do another Relic title

View PC info
Yeah the MOBA thing killed it for me. I have little inclination to play this again.
May mess around with skirmish but the story is kinda a mess.
I enjoy playing DoW 1 in wine a LOT more. 4 expansions , like 8 races by the end (only Tyranids missing if I recall)
1 Likes, Who?

View PC info
So the rampant negativity won in the end. Well, whatever...
4 Likes, Who?

View PC info
I really liked DOW 1. Allready DOW2 wasn't mine anymore. I liked the base building and the unit upgrade feature.

However my hopes are all-in with Warhammer 40,000: Gladius - Relics of War wich seems to be come to Linux Day 1. And yes I know it is a 4x Game and not RTS with quick action like DOW and not really comparable. But I hope to get some W40k immersion.
2 Likes, Who?

omer666So the rampant negativity won in the end. Well, whatever...

I bought it full price despite the negativity, but I have to admit... I only played 22 hours before just, kind of, moving on. It didn't grab me. I found the low quality of tutorials really frustrating (like the elf-like race creates some kind of portal, but I didn't know why I had to create them - was just told doing so was vital... okay then). Winning a scenario tended to revolved around zerging resource spots early on, consolidating briefly, then zerging the next. So much for tactics.
2 Likes, Who?

View PC info
All I want is Dawn of War 1 with pretty graphics. Is that so much to ask?
4 Likes, Who?

Who would imagine that players like base building and resource management? Well, not devs...

In fact, Relic didn't created a good (traditional) RTS for some years already. Thats why choosing them for AoE4 is a weird thing. Hopefully they won't try to innovate. Because when they innovate, they produce a shitty thing.
4 Likes, Who?
1/4»