Destination Ares, control an AI aboard a rusty old colony ship and keep the crew alive, Linux support is planned

The developer of 'Destination Ares' [Steam] has stated on Steam that a Linux version of this interesting sounding strategy game is planned. 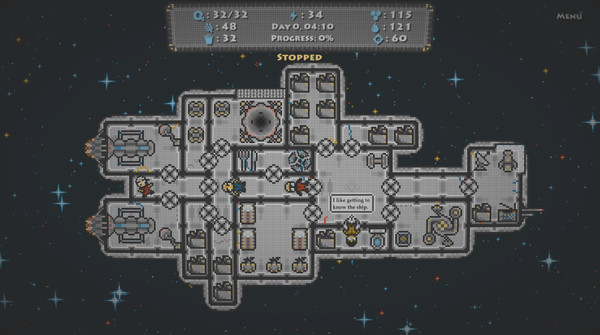 I've voiced my support, as it's one I would genuinely like to try out. I will keep you posted on any updates.

A colony spaceship has been thrown together with old, worn parts. The crew boots up the ship's artificial intelligence as they start the arduous journey to the red planet.

You've awoken, AI. Can you survive the journey ahead?

Destination Ares is an unforgiving resource-management sim, wrapped in a pensive story. As the ship's AI, it's your job to keep the crew alive, against all odds and obstacles (including themselves).

Do Windows developers not know about dual booting?
0 Likes

View PC info
I personally have no interest in this. The graphics look very bad, especially for a $12(US) game.
0 Likes

Quoting: zimplex1I personally have no interest in this. The graphics look very bad, especially for a $12(US) game.

benklett 16 Nov, 2016
View PC info
At first, I thought the game would be an extension to Faster Than Light. I mean the ships look really similar, except for the texture quality.

Quoting: zimplex1I personally have no interest in this. The graphics look very bad, especially for a $12(US) game.

Graphics shouldnt make or break a game. OG fallout looks terrible by modern standards, yet I would have totally payed $60 for that game. I bought it on GoG, along with the second one. FTL has civ levels of playtime, and it looks 16 bit.


Last edited by TheinsanegamerN on 17 November 2016 at 5:31 pm UTC
0 Likes
While you're here, please consider supporting GamingOnLinux on: