To start out let’s go over the system requirements for DiRT Rally and compare them to the systems I will be using to benchmark the game.

When it comes to GPU requirements, an R7 270 is placed as the minimum along with the 650 Ti and the Intel Iris Pro 6200 and a 970 is recommended. My main system still uses the R7 370 4G which is close to the 270 in terms of performance, considering it is practically the same chip with slightly higher clock speeds. The laptop uses the APU’s built-in graphics chip which is marked as an R5 (320 stream processors at 720MHz). The APU is significantly slower than an R9 270. Both systems have the minimum required amount of RAM (8GB) with the main system using 1333MHz DDR3 memory while the laptop has 1866MHz DDR4.

Now that that’s done, let’s dive deep into the world of numbers and framerates! 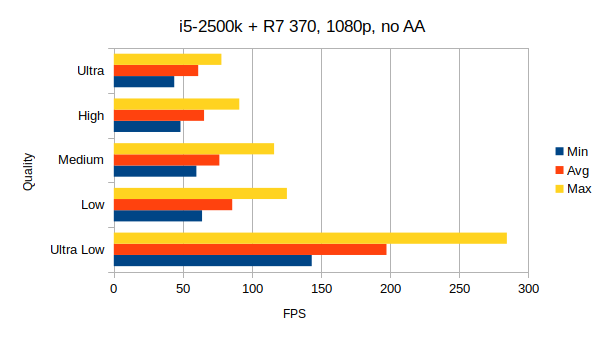 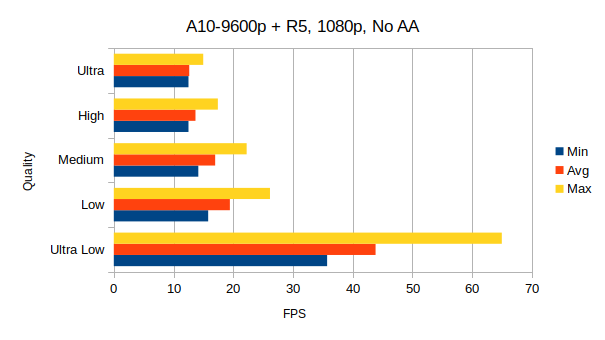 On the APU things weren’t going too smoothly anymore. At 1080p only Ultra Low could be considered playable, with the average being at 43 FPS and minimum at 35 FPS. Going anywhere above that resulted in the minimums and averages to drop below 20 FPS. You could probably fiddle with the settings to get a stable-ish 30 FPS with a combination of Ultra Low and Low settings at 1080p. Considering this laptop of mine isn’t really a gaming beast, I’d say this is acceptable performance. 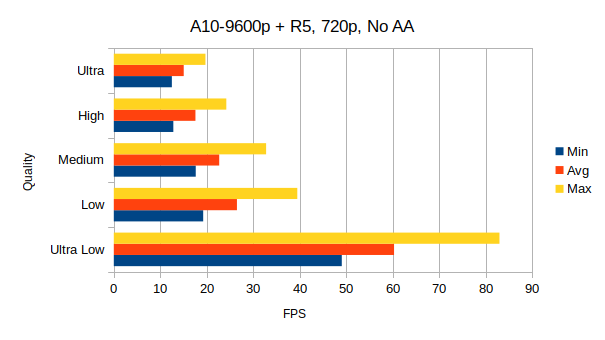 Dropping the resolution down to 720p definitely helped the APU pump out some additional frames, but going above Ultra Low still resulted in an experience I would no longer call playable. However, tweaking with the advanced settings should allow for a slightly shinier graphics at 720p than at 1080p. Alternatively you could just stick to Ultra Low and you would get an experience I would call fully playable, with the framerate being between 49 and 83 FPS.

Also worth noting is that there were graphical glitches with the A10-9600p when graphics were set to Low or above. The glitches were fairly minor however, the tape fence along the track seemed to blink in and out but nothing else seemed to be affected. I'm not sure what caused this but considering it didn't appear on my R7 370 it's possibly linked to the amdgpu kernel driver, which is what my APU uses.

In conclusion, DiRT Rally performs pretty damn well on Linux and I don’t have anything to complain about when it comes to performance. Keep in mind that while I did include my laptop into the testing, I did not expect particularly great results from it to begin with and I’m actually quite happy with how things turned out with the APU.

Have you tried out DiRT Rally on your system? Make sure to share your performance numbers in the comments! Article taken from GamingOnLinux.com.
Tags: AMD, Benchmark, Feral Interactive, Racing | Apps: DiRT Rally
12 Likes
Share

I'm a Linux gamer from Finland. I like reading, long walks on the beach, dying repeatedly in roguelikes and ripping and tearing in FPS games. I also sometimes write code and sometimes that includes hobbyist game development.
See more from me
Some you may have missed, popular articles from the last month:
The comments on this article are closed.
13 comments
Page: 1/2»

M@GOid 3 Mar, 2017
View PC info
What is the model of your laptop? A lot of recent AMD mobile APUs were restricted to only 15W setups and tiny batteries, witch didn't help at all to compete with Intel equipped models.
0 Likes

I haven't done any further changes since this works great. I also didn't notice any visual upgrades for 4k, only a huge 56% drop in avg. fps

Has anyone else noticed the nice resource management?! My laptop hasn't gone over 60C, and this one is definitely multithreaded -- 78 threads ATM, with 3.3GB system/2.0GB GPU memory used for the game.
1 Likes, Who?
Guest 3 Mar, 2017

RussianNeuroMancer 3 Mar, 2017
Switching CPU governor from ondemand to performance could be very useful for running games on APU.
1 Likes, Who?

Quoting: RussianNeuroMancerSwitching CPU governor from ondemand to performance could be very useful for running games on APU.

@meggerman I noticed over 55% frame count reduction with no visual improvement; so all loss no gain.

Not sure if it just scales really well or what. For MSAA I haven't even tried lower yet,

I usually just alter one variable at a time so it's easier to attribute causality. I'll check it out and see how it does (I'm sure it can only improve with less computation per frame!)

@RussianNeuroMancer modern chips don't really see much benefit from governor changes, I usually stick with p-state for thermal sanity but totally agree that there could be some upside to performance.

I also wanted to test disabling the new default Nvidia threads config, that's one that can sometimes be huge gains or losses depending on the code. Usually it's gains but with these ports you never know what the secret sauce will be.

View PC info
Did the laptop have 2x4gb or 1x8gb? AMD APUs tend to perform worse with only one dimm

View PC info
woow
i've a laptop with an APU A10 8700p (very similar to the A10 9600p).
my APU has 15W tdp (the version with 35TDP, is a lot more powerful), how many TDP has the 9600p that you have tested?
have you tested with DDR3 or DDR4??? what is the frequency of the ram?
for the integrated APU's GPU, the ram frequency is really important for performance.
you must give us more information

there is a message that says unsupported hardware, but it's playable enough with mesa-glthread coming it should get better.
I'm running ck kernel 4.9, with cpu governor set to performance.
0 Likes
1/2»
While you're here, please consider supporting GamingOnLinux on: